Chemtrails for Hire: One Company Lets the Rich Cloud Seed for a Sunny Wedding

Jenny Lewis view more articles
Facebook 0 Twitter 0 Pinterest 0 Google 0 LinkedIn 0
Oliver’s Travels, a UK based luxury holiday company, has started offering a cloud bursting service that will “guarantee” a sunny day for weddings. There are a number of restrictions in place for this new service, including that you have to be rich. An unnatural sunny wedding day will cost you approximately £100,000 (1).

Cloud seeding, or bursting, using chemicals sprayed from an airplane to control the weather, is not a new idea (2) and has apparently been previously used to ensure clear skies for a Paul McCartney gig, the 2008 Beijing Olympics and Prince William’s wedding (3).

Experiments in controlling rain began in the U.S in the 1940s. Rain occurs when water in the air freezes to become ice crystals. These are too heavy and subsequently fall to the ground, melting along the way (4).

The theory is that by spraying the air with dry ice or silver iodine (which Oliver’s Travels claims to use), this freezing is sped up resulting in rain. During times of drought or in particularly dry areas, the technique can mean saving crops and providing lifesaving water.

But, so far it seems that cloud seeding had mostly been used for rushing clouds through the rain process to create clear skies for entertainment purposes.

Due to controlled experiments being difficult to do (4), what with changing climates and constantly moving weather, scientists aren’t entirely sure that the technique actually works. It’s possible that it would have rained or been sunny anyway, with no chemical interference from humans.

Many experiments were carried out in the 1960s, resulting in the conclusion that the silver iodine actually caused the moisture to freeze into tiny ice crystals that evaporate on their way down to the ground (5). So while cloud seeding doesn’t necessary create rain, it can create a situation where the cloud disperses, leaving a clear sky.

A study published in 2010 by the University of Tel Aviv supports this by showing that rain that was thought to be caused by cloud seeding would actually have happened naturally due to incremental changes in the climate. The study showed that areas not affected by cloud seeding also received extra rain over a six year period during experiments, and that this rain was caused by cyclone activity rather than cloud seeding (6). 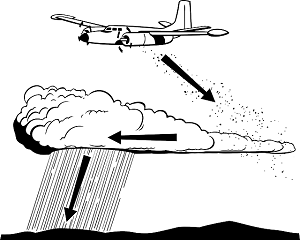 Chemicals in the Air

Whether it works or not, scientists and the wealthy are still showering our atmosphere with silver iodine. Considering that this chemical supposedly makes the moisture in the air freeze and fall to earth, should we be concerned about the silver iodine poisoning our waterways and crops, just so a couple can get married in the sunshine?

A study by the Weather Modification Association claims that scientific literature suggests that silver iodine causes “no environmentally harmful effects” as a result of cloud seeding (7). Of course, they are a bit biased.

The question of whether silver iodine being released into our atmosphere is harmful differs from country to country.

While some suggest it can cause respiratory disease (8), many scientists claim it is a benign substance and does no harm, although they often refute that the chemical does anything to the clouds in the first place (5).

Silver iodine may or may not be harmful to living creatures on this planet, but nothing seems to justify spraying chemicals into our atmosphere just so that someone’s wedding day is dry. 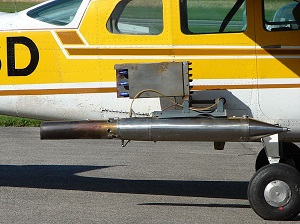 Will the Concept Take Off

It’s difficult to say how the minds of those with £100,000 burning a hole in their pocket work. It is fair to say that those who do fork out this money for such a service may be concerning themselves with the wrong things in life.

Oliver’s Travels is currently waiting for its first sale of the service (5) and is only offering it for weddings in France, where there is often good weather anyway.

For those considering a cloud seeding service for their wedding, it should be known that rain on your wedding day is actually considered good luck (9). It also leads to some brilliant photos (I know from personal experience).

But it is likely that the majority of millionaires planning a wedding will not want to spend so much money on something so frivolous and unconfirmed. Rather than spending £100,000 on a service that may make the sun shine on a day that would have been clear anyway, they could just as easily plan their wedding on a beautiful, sunny Caribbean island.

The threat of cloud seeding is more likely to come from governments and overly enthusiastic PR companies than millionaires planning their weddings.