Is Venezuela Right to Ban Bush and Cheney as Terrorists? 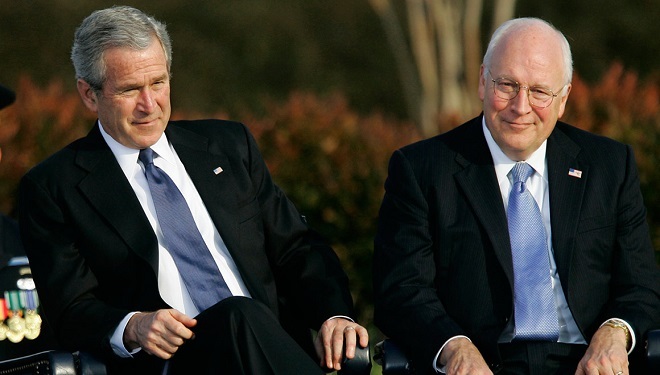 Some feel that former U.S. President George W. Bush and Vice-President Dick Cheney are terrorists. Bush canceled a trip to Switzerland in 2011 over planned protests and threats of an arrest warrant (1). In 2012, Cheney canceled a trip to Toronto over concerns about personal safety (2). It seems that both Bush and Cheney are quite unpopular in Canada due to their positions on interrogation techniques of war prisoners and the invasion of Iraq.

Also in 2012, Malaysia became the first country to try the former president and vice-president for war crimes, albeit the trial was held in absentia (3).

It seems you don’t have to be present for your trial in Malaysia if you are being accused of war crimes. While the Malaysian court declared Bush and Cheney guilty, they didn’t ban them from entering the country.

For the first time in history, however, a foreign nation has banned a former U.S. president and vice-president from entering the country by citing international law. Venezuela has declared Bush and Cheney, among others, terrorists and said they aren’t welcome (4).


Are Bush and Cheney Guilty of Terrorism?

So the question is, are the alluded to village bombings that took place in those locations under the authority of the Bush-Cheney administration evidence of terrorism? If those constitute acts of terrorism, then the Republican administration could be guilty of violating the very laws they claimed to be upholding by invading Iraq. Is that the case, or is Maduro full of it? Let’s see.

The question’s difficulty is compounded by the fact that definitions of terrorism vary. A document on the website of Duke University provides the definition under U.S. Code as “premeditated, politically motivated violence perpetrated against noncombatant targets by sub-national groups or clandestine agents” (6).

Since Bush and Cheney were president and vice-president, respectively, of a sovereign nation at the time of their questionable actions, they could not be considered “sub-national” or “clandestine agents”. So that definition would not suffice.

The same document refers to a Department of Defense definition, which is somewhat broader:

This definition is problematic because it hints at motivation. As president and vice-president, Bush and Cheney had a duty to protect the U.S. from potential threats. They are on the record as claiming they believed that then-Iraq President Saddam Hussein was plotting an attack on the U.S. and their invasion was an act of anticipatory self-defense, which is allowed under international law (6).

In order for that claim to be proven false, anyone accusing the two of being terrorists would have to prove they were lying about what they believed regarding Hussein’s intentions, and that would be difficult.

Since we are dealing with conflicts between nations, U.S. law is not helpful. A more objective standard of justice, one that does not require the U.S. to judge itself, would be appropriate. The world has two such organizations – the United Nations (UN) and the International Criminal Court (ICC), located in The Hague, Netherlands.

Can Bush and Cheney Be Tried as Terrorists?

Since the UN has no agreed-upon definition of terrorism (7), it would be difficult to try any national leader in the world for acts of terrorism simply because no one could argue the point. However, the international membership agency agrees that terrorism violates its own most cherished value of respect for human rights (8). That’s about as close as it gets to defining terrorism.

A former judge at the International Court of Justice (ICJ), the primary judicial branch at the UN, says Cheney will likely be tried as a terrorist (at some point in the future) (9). That’s just one man’s opinion. Since the UN can’t agree on a definition of terrorism, it likely won’t happen at the ICJ.

The ICC is another story.

While the ICC has accepted a definition of terrorism (10), whether Bush and Cheney are likely to be tried against that definition is another matter entirely. For one thing, the U.S. is not a member of the ICC and therefore the court has no jurisdiction over it (11). Absent jurisdiction, there is not likely to be a trial.

That doesn’t mean they are not guilty of the charges leveled against them, however. The ICC’s definition of terrorism includes “any other act” that intends to inflict bodily injury to non-combatants for the purpose of intimidating a population, a government, or an international organization “to do or abstain from doing any act.”

In order for Bush or Cheney to be guilty of terrorism according to the ICC’s definition of it, they would need to be deemed guilty of intending to cause injury to civilians by bombing their villages in an attempt to intimidate them, Hussein, or an international organization in some way.

This definition requires two tests, both of them motivational. All it would take is persuasive arguments to convince ICC judges that Bush and Cheney fail those two tests.

At this point, that has not been done, but there does seem to be some momentum growing regarding the sentiment. Maduro may have a point, but it’s just his opinion.