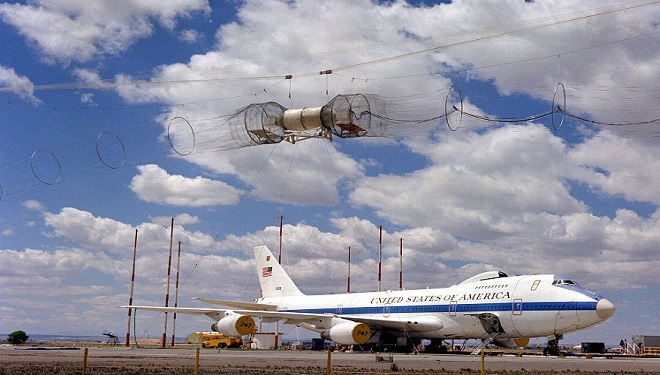 Allen Taylor view more articles
Facebook 0 Twitter 0 Pinterest 0 Google 0 LinkedIn 0
The U.S. military’s weapons are getting badder all the time. If they’re not getting bigger, they’re getting smaller — and badder. As in bad ass.

The Air Force is introducing a new electromagnetic pulse (EMP) weapon that could be the world’s most dangerous EMP weapon on the planet. Check out the CNN report video below.

For those not in the know, or still stuck in the 20th century, an electromagnetic pulse weapon is a weapon that shoots bursts of high-powered energy designed to knock out electronic systems.

The technology is capable of targeting specific buildings and electronic systems such as the enemy’s electronic weapons, drones, intelligence networks, television and radio towers, and anything that runs on electronic power.

That could include automobiles and military vehicles.

If that sounds a bit science fiction to you, that’s because the technology was first deployed in sci-fi films like Star Wars. It is now science fact. A reality. Coming soon to a battlefield near you.

The EMP weapon was designed by Boeing, the maker of many commercial and military aircraft. That alone should put it in the same kick-butt category as the Fast and Furious franchise.

The system is being called CHAMP, an acronym for Counter-electronics High-powered Microwave Advanced Missile Project.

In other words, it’s a nuke with super-targeting power that lowers the collateral damage of traditional weapons to nil, because if you can knock out an entire building’s electronics systems without killing anyone inside (or outside), why wouldn’t you?

By killing the power that enemy forces rely on to wage war, the U.S. military can completely shut down the enemy’s ability to produce casualties on our side of the conflict. If we can do that, then it’s round-up time.

Try This Fictional Scenario On For Size

Suppose the U.S. authorities learn of a terror cell operating out of Sears Tower in Chicago. Instead of blowing up the building and producing thousands of civilian casualties, the air force can simply shut down the power system that runs the building. Sure, that would render all the innocent business going on in that building, but it would also de-power the terror cell operating in one of its office buildings.

The U.S. could then send in a Special Forces unit to evacuate the building of civilian personnel and flush out the terror cell, maybe even without firing a shot. There would be a lot fewer casualties in the long run and we’d all be safer.

In a world where the battlefield is ongoing, exists in a three-dimensional all around context on both sides of the Atlantic, and keeps the innocent civilian population wrapped up in the same mix as combatants, the safest route to security is with an EMP system. The Air Force’s has already been tested (2) and looks to be on all systems go.

Some American leaders have feared a devastating electronic attack on the U.S. in recent years (3). But the U.S. Air Force’s electronic pulse weapon ensures we have superior firepower should an all-out electronic war occur on a global scale. Of course, we hope it doesn’t, but it doesn’t hurt to be prepared.