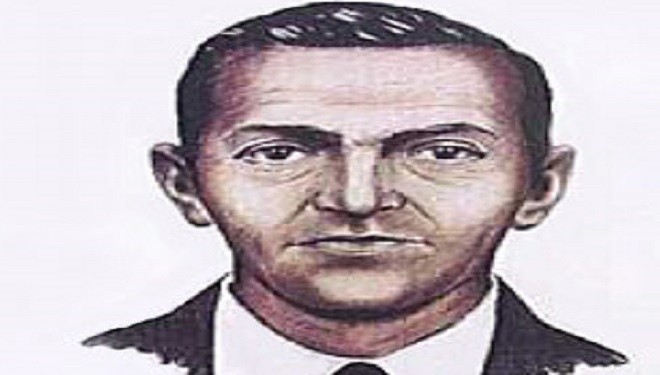 Jeri Simpson view more articles
Facebook 0 Twitter 0 Pinterest 0 Google 0 LinkedIn 0
In the world of Missing Persons reports, not every incident is met with an uproarious fanfare as the person is united with their family and loved ones.

Some of these cases result in the tragic and untimely death of men, women, and children.

Some of these cases never find a resolution, with lack of evidence available to substantiate its closure.

Whether solved or not, many of these cases are shrouded in strange and unusual stories.

In 1971, using the alias Dan Cooper (sketch above), a man purchased a ticket for flight 305 aboard Northwest Airlines, traveling between Portland and Seattle. The man passed a note to a flight attendant, alerting her that he had a bomb. He then dictated his demands, which included $200,000 and four parachutes (2). The Boeing 727 flew over Puget Sound for roughly two hours while Seattle area police and FBI gathered his requests.

Upon the meeting of his demands, the hijacker ordered the plane to be landed in Seattle where he gathered his requested materials and released the passengers other than the flight crew.

He then set the pilots on a course toward Mexico City with very specific flight instructions. The hijacker, who would later be known as D.B. Cooper due to media confusion, had jumped from the plane via the aft airstair. Upon landing at Reno Airport, FBI agents and officials confirmed Cooper was not aboard the plane.

Cooper was believed to have evacuated over the Lewis River in Southwestern Washington, although investigators never located him. Although the plane was being tailed by a number of aircraft, no one witnessed his escape (2). With his real identity still unknown, the FBI processed over a thousand suspects, including deathbed confessors and publicity seekers who had all been ruled out.

To this day, the identity of the man and the majority of the money have yet to be discovered. FBI experts doubt D.B. Cooper was able to survive the jump (3). 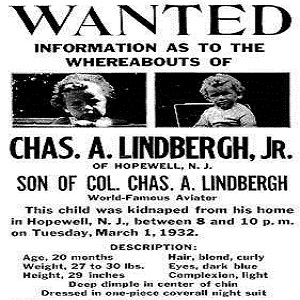 On the evening of March 1, 1932, the oldest son of noted aviator Charles Lindbergh was put to bed in his crib in Hopewell, New Jersey. Hours later, he was found missing and a ransom note had been left in his room.

Lindbergh was instructed to leave $50,000 in specified bills for the kidnappers of two year-old Charles Lindbergh Jr., also known as the Lindbergh Baby. Lindbergh’s high-ranking friends were allowed to pursue the investigation contrary to standard investigation protocol.

Two months later, the toddler’s remains were discovered in a nearby grove with notable decomposition and a fractured skull, which was ultimately considered the cause of death.

The investigation continued for two years with speculation pointing to an inside job by those close to the Lindbergh family. The staff and friends involved in the investigation were questioned but ultimately found to be innocent of any involvement.

When the list of suspects dried, investigators turned to the gold certificates that had been handed over in the ransom. One of the bills was traced to Richard Hauptmann who was ultimately arrested and found guilty for the kidnapping and murder of the toddler.

Hauptmann pleaded his innocence to the end, when he was eventually sentenced to death by the electric chair. Many believe the case to be riddled with deception. In The Plot Against America, Phillip Roth theorizes that the kidnapping was arranged by prominent Nazis to extort Lindbergh for support of their policies (4).

The incident prompted Congress to enact the Federal Kidnapping Act, also known as the Lindbergh Law, which makes abduction a federal crime if the victim is transported across state lines. 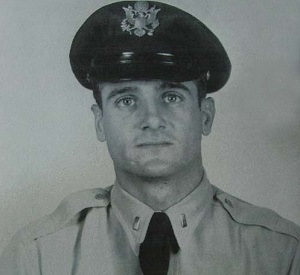 It has been over 50 years since First Lieutenant Felix Moncla disappeared. Moncla was on temporary assignment at Kinross Air Force Base when he was instructed to perform an air defense intercept over Lake Superior on November 23, 1953.

Moncla boarded a F-89C Scorpion jet to investigate an unidentified “blip” that had appeared on radar. According to Ground Control, Moncla was flying at 8000 feet when the two “blips” on radar merged into one object. It was feared that the two aircraft had collided.

Both the Royal Canadian Air Force and the United States Air Force conducted investigations into the incident. In the official USAF report, Moncla was sent to investigate a RCAF C-47 Skytrain that had gone off course (5).

Due to the unexplained nature of the incident, many have questioned if the incident involved a UFO. Most notably, UFO investigator and former Marine naval aviator Donald Keyhoe penned a book called The Flying Saucer Conspiracy, in which he noted details of the incident and its paranormal connections (6).

The case would later come to be known as the Kinross Incident. To this day, 1st Lt. Moncla and his 2nd Lt. Robert L. Wilson who was manning the defunct onboard radar have yet to be found.

In June 2014, when 12 year-old Charlie went missing, his father took to the pavement, knocking on every door in the neighborhood. The search lasted for two weeks and involved not just his community, but also the FBI, in an attempt to locate the child.

The police thoroughly searched the Detroit home four times before discovering the boy in the basement behind a makeshift barricade made of a five-gallon drum. Charlie’s father received news of his son’s location on live television during an interview with HLN’s Nancy Grace (7).

Charles Bothuell IV and the boy’s stepmother Monique Dillard-Bothuell were charged with second-degree child abuse and torture. The young boy testified that he lived in deplorable conditions in which he was repeatedly abused. Judge Shannon Holmes dismissed the torture charge, stating that she didn’t believe the boy was stuck in the situation. However, she did charge both individuals with child abuse.

The boy is now living with his mother and his siblings are living with other family. Sentencing is still pending at the time of this story (8).

Although some of these missing person cases have been deemed closed, professional and amateur investigators are still creating alternative theories that leave these cases shrouded in mystery.