CIA Torture Prisons Were Probably Worse Than You Can Imagine

Everyone from The Nation (3) to The Washington Post (4) has talked about the CIA’s secret black sites. It’s no secret by now that the U.S. has operated these torture sites in secret for some time. There were at least nine of them (5). But how bad were they?

Not much is known about what has gone on inside the CIA’s torture prisons, because the mainstream media hasn’t reported on it and no one in the federal government has taken responsibility for it (6).

We know there was waterboarding, which was defended by former Vice President Dick Cheney (7). Torture is officially illegal in the U.S., so no one wants to own up to it. Yet simply by someone in the government defending the practice, we can assume it occurred.

Do you want to see what that black site looks like? Google will show you (10).


Inside the CIA ‘Black Sites’

The Romanian prison was code named “Bright Light” and was part of a secret network of prisons operated by the U.S.

Some of the most infamous terrorists captured were held there, including the mastermind of the 911 attacks that took down the World Trade Center towers, Khalid Sheik Mohammad (11).

Other black sites were located in Poland, Thailand, and Lithuania.

Most of these sites were in remote locations, but not the one in Romania, which stores classified information for NATO and the European Union (EU).

That makes me wonder to what extent the EU and other foreign nations knew about these black sites, and did they participate in the torture techniques that likely took place in them? 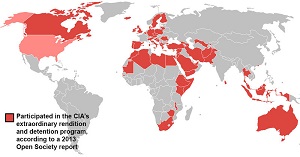 While Romanian officials deny the U.S. had a secret prison at that location, former U.S. employees claim otherwise.

They say the building has a basement with pre-fabricated cells where prisoners were held in detention.

The secret prison was housed in plain sight in a country known for spying on its own citizens.

The black sites were officially shut down by President Barack Obama between 2006 and 2009.

According to Andrew Sullivan, the techniques used were not much different than those used by the Nazis (12). If he’s right, they’re much worse than we’ve been led to believe.