Terraforming Mars: Is the Science Plausible? 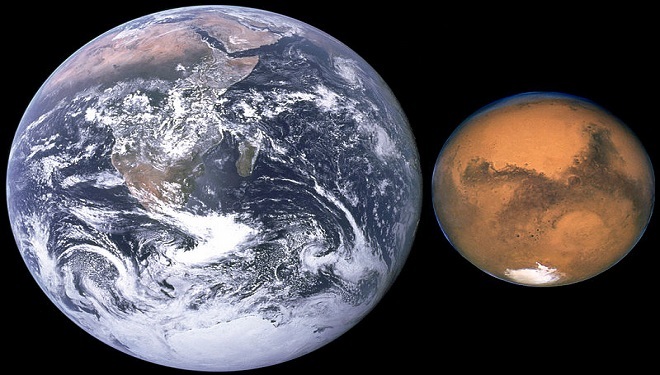 Mark Whittington view more articles
Facebook 0 Twitter 0 Pinterest 0 Google 0 LinkedIn 0
Mars has sometimes been called the ultimate fixer-upper planet. Billions of years ago, the Red Planet was more blue and green, having a thicker atmosphere, flowing water, and perhaps life of some sort. Mars once had more water than the Arctic Ocean (1).

According to Forbes (2), this state of affairs changed due to the inner core of Mars becoming inert. The core of a planet, when it is rotating, creates an electromagnetic field that protects against solar wind.

The Earth’s inner core, for example, provides just such protection. However, since Mars’s inner core became inert, the planet lost its electromagnetic field. Slowly but steadily solar wind blew its atmosphere away.

A lot of the water went along with the atmosphere; the rest being frozen at the poles and some, perhaps, existing underground. Now Mars is a cold, arid planet with air too thin to breathe, prone to radiation and meteor strikes. In short, the Red Planet is hardly a hospitable place for humans.

That state of affairs may change, thanks to a technique called terraforming. NASA (3) defines terraforming as “the process of transforming a hostile environment into one suitable for human life.” By terraforming Mars, humans may make the planet into another Earth.


How Would Settlements Work?

How could we terraform Mars? An article in Popular Mechanics (4) suggests that future Mars colonists will start by seeding the surface with genetically engineered microbes that will access the subsurface water and start to munch on nutrients to create oxygen to gradually rebuild the Martian atmosphere.

How Stuff Works (5) adds some more drastic techniques, which include giant, orbiting mirrors to heat Mars up, melting the water in the polar icecaps, and crashing asteroids and comets onto the Martian surface to add more water, oxygen, and other substances.

As the atmosphere begins to return and water starts to flow, future terraformers will add higher plants and animals, genetically engineered to adapt to Mars’ lower gravity. In the fullness of time, human beings will be able to walk unprotected under a Martian sky, just like John Carter did in Edgar Rice Burroughs’ novels.

The fly in the ointment is that the same conditions that turned Mars from a warm, wet world into the frigid desert that it is today will still adhere. Without an electromagnet field, solar wind will start to strip away the restored Martian atmosphere, placing the renewed ecosystem at risk. The solution is to either continue to restore the atmosphere or to create an electromagnetic field for Mars, thus protecting the fourth rock from the sun’s radiation.

One study (6) suggested that future Mars settlers could inject radioactive materials into the Martian core to reignite it. However, it is more likely that the settlers will create an artificial electromagnetic field to provide the newly restored planet some protection.

Two problems stand in the way of turning Mars into a second blue planet, one technical and the other political.

Technically, the idea of altering a planet’s ecosystem is not something that is well understood. Scientists are fighting over whether and to what degree human activity is altering the Earth’s environment. The issue facing people who propose terraforming Mars is: what if things go wrong? Would future settlers be able to fix things on the fly?

Politically, people who desire to terraform Mars will collide with scientists who want to keep the Red Planet pristine, the better to ferret out the remnants of life that might have existed billions of years ago. The act of terraforming will all but certainly crowd out what ancient life might be hiding in the deep recesses of Mars. The “Red Mars vs. Blue Mars” controversy may become a major issue in the late 21st century.

In any case, the terraforming of Mars will likely begin, whether people desire it or not, from the moment the first humans set foot on its surface. Microbes will escape from the first habitats, and some surviving in the harsh Martian environment will go to work.

So, if humans are to live on Mars at all, they will have no choice but to terraform the Red Planet, by deliberate design or by accident.

20 Most Stunning NASA Images of All Time

Going to Mars? This Astronaut Says We’re Not Ready Yet

Will Trump Be The President to Take Us to Mars?

Will NASA Be Able to “Grow” a Mars Atmosphere?