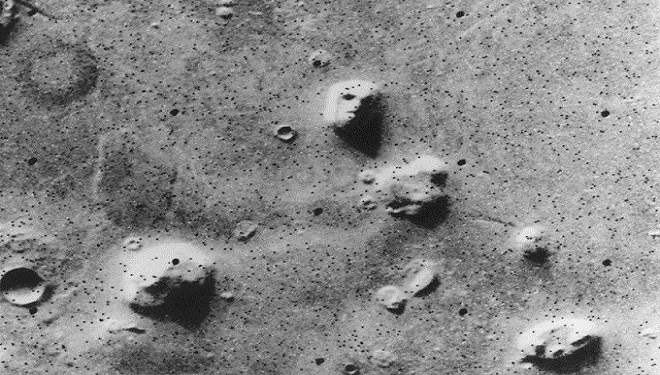 Mark Whittington view more articles
Facebook 0 Twitter 0 Pinterest 0 Google 0 LinkedIn 0
People have been seeing things in the skies and taking them to be alien spacecraft for decades (1). More recently, looking at images beamed back to Earth by numerous space probes, people have started to see things on alien worlds, particularly Mars, that they have concluded constitute evidence of intelligent life.

The latest of these sensations is the so-called Mars Pyramid, alleged to have been imaged by the Mars Curiosity Rover.

According to the UK Daily Mail (2), some conspiracy theorists claim to have seen, in the midst of the rubble on the Martian surface, a perfect replica of the Great Pyramid of Giza.

This sighting had been taken to be proof that, at one point in time, Mars contained an intelligent civilization, which died out when the Red Planet’s atmosphere leached away with much of its water. Another theory supposes that the ancient Martian civilization was destroyed in a nuclear exchange (3).

The Huffington Post interviewed Dr. Jim Bell, deputy principal investigator of the Mastcam investigation program on the Mars Curiosity and a professor of astronomy at Arizona State University in Tempe on the subject of the so-called Mars Pyramid (4).

He concluded that it was just a rock and, far from being a replica of the Great Pyramid, it is just four inches tall. Volcanic rocks tend to be cleaved with sharp angles, in this case making it a pyramid shape. The rock is an interesting geological curiosity, but hardly proof of an ancient Martian civilization.

The Mars Pyramid is not the first or even the most spectacular sensation to come out of the camera lens of a NASA space probe. In the 1970s, one of the Viking probes orbiting Mars took an image of what appeared to be the face of a being resembling a monkey on the Martian surface on the Cydonia Plain. Some have even claimed to see other structures surrounding the “Face on Mars” (5).

Richard C. Hoagland (6), a self-described “science advisor,” author, and conspiracy theorist popularized the Face on Mars for decades, authoring a book titled “The Monuments on Mars: City on the Edge of Forever” in which he theorized how the so-called face was evidence of an ancient Martian civilization that likely influenced the rise of civilization on Earth.

The Face on Mars theory took a severe hit (7) when the Mars Global Surveyor took images that proved that the “Face” is, in fact, a mesa formed by natural forces. A trick of light and shadow when the Viking took the original images made them appear to be that of a face.

Hoagland and his followers are having none of it, claiming a NASA cover-up. However, the idea that the space agency is engaged in concealing evidence of intelligent life beyond the Earth can be dispensed with by considering a salient fact.

That fact is that one way for NASA to get increased funding for its missions, which include sending astronauts to Mars, is to present definitive proof that intelligent beings once lived on the Red Planet. NASA would be all over the idea of sending astroarcheologists to study artifacts such as faces and pyramids if they existed. Did Life Exist on Mars?

The question arises, could intelligent life have existed on Mars?

Scientists, based on the data returned from probes like Mars Curiosity, have concluded that Mars had running water (8) and a thick atmosphere billions of years ago.

The Red Planet may have had life, even intelligent life. However, over 50 years of Mars exploration has not found even direct evidence of Martian microbes, not to mention intelligent beings. It could very well be that after billions of years, any such evidence, had it existed at all, is no longer there.

Martians eventually will exist, either again or for the first time. But they will be human settlers who will go to the Red Planet to create new lives on the other side of the airless sea.