Why Glyphosate-Bathed GMO Plants Really Are Dangerous to Your Health 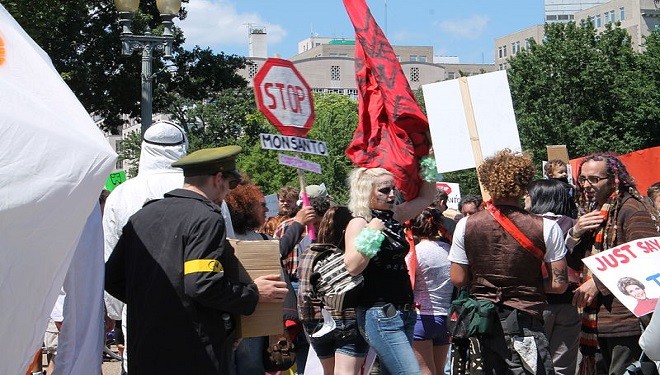 SallyPainter view more articles
Facebook 0 Twitter 0 Pinterest 0 Google 0 LinkedIn 0
The battle continues between pro-GMO and anti-GMOs advocates. Glyphosate, the active ingredient in Monsanto’s Roundup, as well as other herbicide products, is the center of the GMO controversy.

An often overlooked question concerning GMOS is whether or not GMO plants by themselves are harmful to consume. The jury is still out on GMO crops since these crops are specifically engineered to be impervious to glyphosate aka Roundup.

But, what of the foodstuff, such as corn or soybeans also being bombarded by glyphosate? What of all the other applications glyphosate is being used for, as in the average American yard? Does all this glyphosate saturating the ground, lingering in the air surrounding crop fields and the inevitable runoff into streams, creeks and rivers have an accumulative effect on the human body, not to mention animals, plant life and the entire eco-system?

With Monsanto’s “commercially relevant United States patent having expired in 2000” it isn’t the only manufacturer of glyphosate. Over 750 products worldwide contain it. Glyphosate is the “highest global production volume of all herbicides” (2).

In 2014, the International Journal of Environmental Research and Public Health published a study titled, “Glyphosate, Hard Water and Nephrotoxic Metals: Are They the Culprits Behind the Epidemic of Chronic Kidney Disease of Unknown Etiology in Sri Lanka?” (3)

This study found a possibly strong link between glyphosate and the tragic epidemic of the fatal Chronic Kidney Disease (CKDu) sweeping through the agri-centers for sugarcane, rice and other crops in the Central American (CA) countries of El Salvador, Nicaragua and Costa Rica, as well as Andhra Pradesh (India) and Sri Lanka.

Sri Lanka and El Salvador subsequently banned Monsanto’s Roundup after the study linked it to the killer CKDu, which is the second leading cause of death among males in these regions.

The epidemic disease became a worldwide problem during the mid-1990s and the study concludes that it has “a strong association between the consumption of hard water and the occurrence of this special kidney disease hypothesized the association of using glyphosate, the most widely used herbicide in the disease endemic area and its unique metal chelating properties.”

The scientists’ findings state: “It [glyphosate] may explain similar kidney disease epidemics observed in.” They are quick to acknowledge that, “Although glyphosate alone does not cause an epidemic of chronic kidney disease, it seems to have acquired the ability to destroy the renal tissues of thousands of farmers when it forms complexes with a localized geo environmental factor (hardness) and nephrotoxic metals.”

The statistics of related deaths are devastating:

According to the May 2014 Research Triangle Institute research brief, the countries considered “geographic ‘hot spots’ include:

While the estimated number of 50,000 patients diagnosed with late-stage kidney disease was given, it was stated: “This conservative estimate does not account for early kidney disease, which is often asymptomatic” (5).

In July 2015, the United Nations (UN) cancer research agency, International Agency for Research on Cancer IARC (IARC) that’s also a branch of the World Health Organization (WHO) concluded, “glyphosate (Roundup) is a carcinogenic agent.” In response to the IARC’s study, France banned “all glyphosate-based products” from its garden centers.

Also in response to the study, Monsanto immediately demanded that the study be retracted. It wasn’t.

In July 2015, Top Secret Writers reported that “The IARC concluded that there was ‘sufficient evidence of carcinogenicity in experimental animals. Glyphosate also caused DNA and chromosomal damage in human cells, although it gave negative results in tests using bacteria.’ ”

Furthermore, IARC cited a study conducted of residents in a community where “glyphosate formulations” had been sprayed. The results of that study revealed “increases in blood markers of chromosomal damage (micronuclei).”

Other Countries Banned or Considering Ban on Glyphosate

In May 2015, Huffington Post reported that in light of the IARC study, the Colombian government “ended the decade-long aerial spraying program to eradicate illicit crop cultivation” (6).

Other countries reported to have either banned or considering banning glyphosate include:

Recently, China lifted a former ban and has been removed from the above list (20).

Many proponents of GMO crops argue that if glyphosate is harmful, then certainly, the Environmental Protection Agency and the (EPA) and the Food and Drug Administration (FDA) and the United State Department of Agriculture (USDA) wouldn’t allow it to be used.

According to the EPA:

Cancer: There is inadequate evidence to state whether or not glyphosate has the potential to cause cancer from a lifetime exposure in drinking water.” As for the environmental impact, according to the EPA, “After spraying, glyphosate levels in sediment rise and then decline to low levels in a few months.” What if the spraying is routine and continuous as in growing crops? (15)

As for the human factor in exposure, the EPA states this can occur and even states, “They [people] may also be exposed by touching soil and plants to which glyphosate was applied.” Nothing is mentioned about eating or using the crops that have been sprayed with glyphosate.

Reuters reported in March 2015 that in 1985, the EPA “classified glyphosate as ‘possibly carcinogenic to humans” just as the recent French study concluded. However, the EPA changed that classification a few years later. The Reuters article states this was, “most likely due to industry influence, allowing the chemical to be the most widely used pesticides in the US” (16).

Reuters also points a finger at the USDA, stating that the agency “has contributed to its [glyphosate] growth by deregulating crops, including the vast majority of corn and soybeans that are genetically engineered to be tolerant to the chemical.”

In addition, Reuters reported that “Ecological data also reports that glyphosate and glyphosate formulated products are toxic to aquatic organisms, and is extremely lethal to amphibians.”

Working with the “Feed The World Project”, OCA “launched the world’s first glyphosate testing for the general public”. The two organizations were especially focused on “women and children in the U.S.” and the testing was the “first-ever validated public LC/MS/MS glyphosate testing for urine, water and soon breast milk” (17).

The test will reveal the level of exposure individuals have through a lifetime of buildup within their bodies. The water source is also being tested as is human breast milk. The testing is being conducted of the general public for contamination from Roundup and other glyphosate exposure. Anyone in the US can participate.

Details can be found on the Feed the World Project website (18).

In March 2015, Huffington Post (HP) reported on the French cable channel Canal+ filming a “news documentary” and subsequent interview with an “independent scientist [Dr Patrick Moore] not associated with Monsanto” (19).

During the course of the interview, Moore countered the IARC’s study that found glyphosate is a possible carcinogen by stating, “You can drink a whole quart” of the herbicide “and it won’t hurt you.”

According to HP, Moore told the news reporter “that humans could even drink the chemical and be absolutely fine, and that people actually try to commit suicide with Roundup, but routinely fail due to its harmlessness.”

During the interview, the journalist states there is a “glass of glyphosate” just offstage and offers to get it for Moore to drink on-air. According to HP, Moore refused and stormed off stage.

The following is the reported exchange:

Patrick Moore (PM): You can drink a whole quart of it and it won’t hurt you.
Canal+: You want to drink some, we have some here.
PM: I’d be happy to actually. Not really, but, I know it wouldn’t hurt me.
Canal+: If you say so, I have some.
PM: No, no. I’m not stupid. People try to commit suicide with it and fail regularly.
Canal+: No, no. Let’s tell the truth.
PM: It’s not dangerous to humans. No, it’s not.
Canal+: So are you ready to drink a glass of glyphosate?
PM: No, I’m not an idiot.”