Activist Patrick Roddie Testifies to EPA on Chemtrails – Is His Science Sound?

Allen Taylor view more articles
Facebook 0 Twitter 0 Pinterest 0 Google 0 LinkedIn 0
As a journalist, I have sat through public meetings listening to environmental activists make some of the strangest claims in favor of public safety.

Not that I’m against protecting the environment or safeguarding public safety, but such matters should be based on sound science and not baseless fears and the wacky concerns of pseudo-scientists.

Recently, geoengineering activist Patrick Roddie spoke to the Environmental Protection Agency regarding the dangers of chemtrails (1).

Who is Roddie, and did he get his science correct?


What is Greenhouse Gas?

Roddie’s first claim is that carbon dioxide is a “harmless, trace gas” that is “essential for life.” So far, so good. You don’t even have to be smarter than a fifth grader to know that basic truth (2). But what’s the big deal about greenhouse gas?

Water vapor, as Roddie points out, makes up about 95% of the earth’s atmosphere. Carbon dioxide, which exists in much lower amounts, however, stays in the atmosphere for a much longer period of time. Water vapor, due to natural weather cycles (rain, snow, etc.) is short-lived. It comes and goes, fluctuating over time. That’s why your body can detect slight rises in humidity levels in just a few seconds.

While carbon dioxide is a natural part of the earth’s atmosphere, as is water vapor, historically, it’s existed only in trace amounts (between 180 parts per million [ppm] and 280 ppm). Since the early 20th century, however, it has increased tremendously (3). This increase, most scientists agree, is what is causing global warming. The water vapor feedback loop is enhancing it (4). 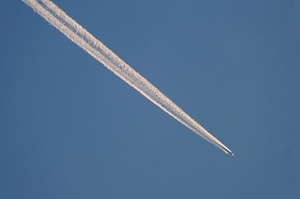 Does That Mean Chemtrails Are Safe?

What Roddie is addressing is the use of chemtrails to geoengineer a solution to global warming. Of course, there are serious concerns about using solar radiation management, as it is called, to force corrective action on the earth’s atmosphere. Even those who advocate for it admit that (5).

Roddie, who is a photographer (6), not a scientist, spent a good deal of his testimony time discussing the health impact on proposed geoengineering solutions.

To be sure, his concerns are warranted since members of the medical community have addressed those same concerns (7). But his understanding of the earth’s atmosphere is based elementary science and not the latest scientific research methods (8) employed by climate scientists (9).

While Roddie may have a good point about the threat to human health posed by chemtrails, and while he doesn’t sound like a science denier persistantly claiming there is no such thing as global warming, he is on thin ice when talking about the earth’s atmosphere. His implication is that the trace amounts of carbon dioxide are harmless, but 97 percent of actual scientists disagree (9).