Are China and North Korea Gearing Up for World War 3? 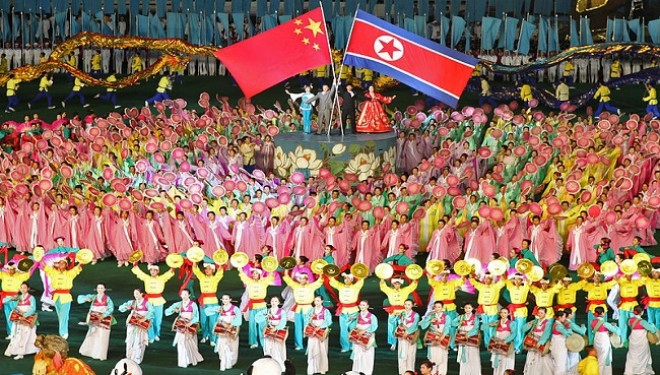 GabriellePickard view more articles
Facebook 0 Twitter 0 Pinterest 0 Google 0 LinkedIn 0
The premise that China and North Korea are gearing up for World War 3 is gathering momentum (1). Reddit shares a collection of articles focused on shedding evidence that WWIII is approaching.

For example, one story featured on Reddit refers to multiple explosions reported at a US military base in Japan. The report shows a video of an explosion at the Sagami General Depot, a US military post in Sagamihara, Japan.

The WSOCTV article cites the Wall Street Journal, which reported three explosions that took place near the Sagami Depot in April this year (2). According to the report, the Japanese police believe left-wing extremists were responsible for the explosions.

Further evidence that points to the suggestion that a Korea-spurred WWIII might be imminent can be found in the recent talks between North Korea and South Korea as Kim Jong Un increased the mobilization of his army.

According to a report in Bloomberg, when officials met for the inter-Korean talks, an official from the South Korean military said North Korea had doubled its front-line artillery forces and had dispatched more than two thirds of its submarines from ports (3).

The escalating tension between North and South Korea was confirmed by claims by South Korea that North Korea fired shells into its territory. According to Bloomberg, North Korea responded with a “barrage of artillery.”

Lee Sung-Yoon, a professor of Korean Studies, spoke of the tensions to Bloomberg:

Raise the stakes and seize the initiative, that is, leave the big powers hanging and eager for negotiations in the face of provocations – that’s Pyongyang’s time-tested mode of operation” (4).

“Since North Korea declared a semi-war state, its invasion vehicles and forces have been actively moving,” said a source.

According to military officials the deployment of the submarines was the largest the region has known since the Korean War. Deepening the tension is the fact that more than 50 of the North Korean submarines have gone missing which, as The Independence writes, escalates fears over Pyongyang’s threat to fire across the border (5).

South Korea announced that the submarines, which comprise of approximately 70 percent of North Korea’s submarine fleet, had left home ports and are now nowhere to be found.

The report mentioned how the United States responded to North Korea’s threats by sending B-52 stealth bombers for training flights over North Korea in what it referred to as a “quiet demonstration of its enormous military might.”

North Korea’s state media recently reported that over one million people have volunteered to fight if hostilities break out with South Korea (6).

“Young people across the Democratic People’s Republic of Korea are turning out in a sacred war for defending the country with their faith and will to annihilate the enemies,” said the Korean Central News Agency.

While signs of an impending North Korean attack have intensified in recent weeks, the prospect of North Korea instigating WWIII has been circulating for some time.

For example, in 2013, a British newspaper reported the suggestion that North Korea might be gearing up for another World War (7).

Korea’s 900,000-strong army, its terrifying arsenal of chemicals and a “leader with a very itchy trigger finger” is testament of the fragile situation in Korea which could explode into a “devastating war.”