Could Martial Law Be Used to Virtually Imprison You? 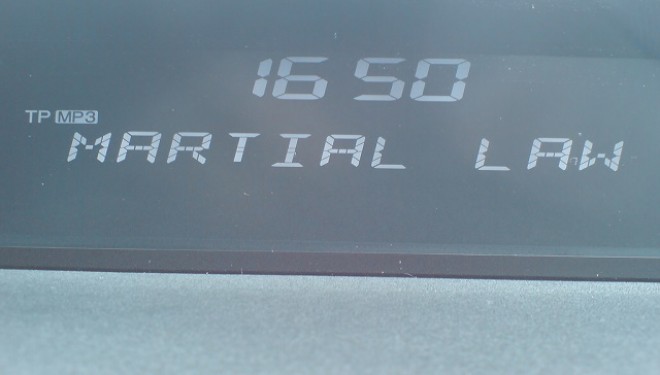 SallyPainter view more articles
Facebook 0 Twitter 0 Pinterest 0 Google 0 LinkedIn 0
The phrase “Martial Law” strikes fear in most Americans’ hearts. Freedom-loving Americans have seen many rights hijacked over the past two decades as big government chips away at the constitution. What would America look like if Martial Law was declared (1)?

In February 2015, editor and host of The Common Sense Show, Dave Hodges, wrote how such a scenario might unfold (2).

Hodges discusses how the political issues of ISIS, Iran, Russia and North Korean have the potential to create World War III. He asks if a war weary America might be unwilling to take on such a war.

In Hodges’s scenario, this could easily lead to the government needing “compliance and unquestionable obedience” and he states the way to force this would be “through the control of food and labor.”

Continuing with this possible future scenario, anyone who is outspoken or rebels against the government’s demand for obedience will be quickly quelled. Hodges states that the fate of war dissidents would be quick “removal, or worse” thanks to the National Defense Authorization Act (NDAA).

To drive home his point, Hodges states, “…the NDAA is the single most draconian piece legislation in American history. The ‘law’ allows the President, or his designees, to indefinitely detain an individual without legal counsel or due process. It is life imprisonment or worse for political dissidents.”

Warning that the NDAA will be the platform for removing “members of the alternative media and others deemed to possess dangerous ideas,” Hodges says this is “one of the main reasons” American communications are monitored by the NSA (National Security Agency).

Following this same kind of concern for Constitutional rights, the ACLU’s (American Civil Liberties Union) evaluation of what has happened to the basic rights of Americans birthed the National Security Project. The objective of the project is to ensure the “US national security policies and practices are consistent with the Constitution, civil liberties, and human right” (3).

The ACLU states, “…after the attacks of September 11, 2001, our government engaged in systematic policies of torture, targeted killing, indefinite detention, mass surveillance, and religious discrimination. It violated the law, eroded many of our most cherished values, and made us less free and less safe.”

Many of these policies, especially those of “extraordinary rendition” and “torture” have been condemned and officially “no longer condoned.” According to the ACLU, “…most other policies—indefinite detention, targeted killing, trial by military commissions, warrantless surveillance, and racial, religious, and other forms of profiling—remain core elements of U.S. national security strategy today.”

Control of Food to Control Masses

Back to Hodges’ scenario for a means to control American citizens, he states the people who pose the biggest threats to compliance will be taken out of the picture. That paves the way for the next tier – control of the food supply. It isn’t a new strategy and one he reminds has been used in the past.

Hodges explains that subsequently the study was used to formulate a “classified plan” to curtail the “unproven claims” that the growing population of Lesser Developed Countries (LDC) was a National Security threat to the US.
That plan, according to Hodges, had the goal of reducing the population growth in those countries by means of war, famine and birth control.

Hodges warns that power to control food and commodities is in the stroke of the US President’s pen. This control is far-reaching from agriculture to “food storage facilities”. That would include any preppers’ food storage since, under the law, it could be seized and redistributed in any manner the government officials decided.

Pointing to the Amish farm raids and even the absurdity of a children’s lemonade stand being shut down, Hodges states this is a “mere conditioning process designed to get all U.S. citizens used to the idea that the government owns all food and food production.”

Hodges feels this type of food control will in part force the masses to participate in a WWIII. But is that the only thing such control might force the masses to do? Is the Orwellian world no longer just a fictional future scenario, but one that is well under way and would be fully unleashed with Martial Law?