Did These Two Men Discover the Fabled Nazi Gold Train in Poland?

Jeri Simpson view more articles
Facebook 0 Twitter 0 Pinterest 0 Google 0 LinkedIn 0
It has been 70 years since World War II ended, marking the end of the Nazi reign that killed millions of innocents. During the six years of the war, Nazi soldiers entered the homes of men, women, and children that would be held in concentration camps before being sentenced to their deaths.

As victims of war, these homes would be ransacked and stripped of anything of value. Jewelry, money, and valuable art was pilfered and stored in various locations. The acquisition continued as eyeglasses, wedding rings, watches, and even gold teeth were removed from the bodies of the slain victims.

The gold was collected and delivered to the Reichbank, Germany’s central bank at the time, where it was laundered under the name Max Heiliger and melted into bullion (1).

With the end of the war, many of the valuables were discovered by US soldiers in abandoned mines, such as the Merkers Salt Mine where over 100 tons of treasures were found, or left behind in the many concentration camps (2).

Among the located valuables include artwork by artists including Renoir, Matisse, and Chagall.

But not all of the appropriated valuables were discovered. In the years since, Nazi gold has been linked to the Swiss National Bank and the Vatican Bank (3)(4). Rumors and speculation continue for the sources of the remaining treasure. The rumors include one about the Polish city of Walbrzych, where it was believed that a train carrying Nazi gold vanished in a network of tunnels under the Owl Mountains in early 1945 while on its way to Berlin.

As it turns out, that rumor about a “Nazi gold train” might be true. Andreas Richter and Piotr Koper and their attorneys contacted Poland’s government with claims that they discovered the missing train possibly containing gold and weapons. Koper and Richter even reached out to retired miner Tadeusz Slowikowski, the only remaining source of the original legend that is alive today.

According to Slowikowski, the train is located near the railway tracks between Wroclaw and Walbrzych in the same area he unsuccessfully searched in 2001 (5). Koper and Richter claim the train is buried underground, which would make the train state property by law, but they would be entitled to a 10 percent reward for the discovery.

Poland’s government is exploring the site due to the possibly volatile cargo on board. Tomasz Siemoniak, Poland’s Defense Minister, has sent military experts in explosives and chemical weapons to explore the area. Make no mistake though, in a public comment Siemoniak clearly stated they are not searching for the fabled gold train (5). 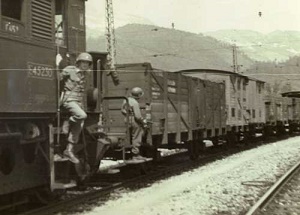 Since the announcement, Poland is experiencing its own form of the Gold Rush as treasure seekers swarm to the area in hopes of getting their own piece of Nazi treasure. Police are patrolling the site to protect the wooded area from the trove of individuals drawn by the possibility of gold.

Richter and Koper stated they are ready to cover the expense of retrieving the Nazi gold train from the ground and hope the site will become a local tourist attraction. The men claim they discovered the location of the train using their “own resources, eyewitness testimony and our own equipment and skills” (4).

The supposed eyewitness confessed on his deathbed that he was involved in hiding the train from the advancing Soviet troops.

Using ground penetrating radar, Poland’s Deputy Culture Minister, Piotr Zuchowski, has confirmed that there does appear to be an armored train within the ground, however, the contents of the train are still unknown as digging has not begun.

The World Jewish Congress has requested that all valuables stolen from victims of the Holocaust be returned to their rightful heirs (6).