Mysterious Scratches on Body – The Science and the Paranormal

SallyPainter view more articles
Facebook 0 Twitter 0 Pinterest 0 Google 0 LinkedIn 0
Is it paranormal, supernatural or perhaps something else? These are the questions people have been asking in online forums for years. It’s a complaint being made by many people. Sudden unexplained scratches appear overnight on arms, legs, torsos and backs. Some people claim they have severe scratches over their bodies (1).

What is happening to these people? This is what has forums buzzing across the Internet. Many people offer medical explanations, while others claim doctors haven’t been able to determine the cause of their mysterious scratches. Some of the victims post photos of their latest scratch marks. Many of the marks come in threes and some people believe these represent demonic attacks.

The most common type of mysterious scratches described is a series of three straight lines. The majority of these don’t break the skin and draw blood. Some people report multiple scratches on arms and legs. A few even report having scratches all over their bodies.

One of the most perplexing set of scratches are those people discover on their backs where they are certain they are unable to reach. These are often found upon awaking due to a stinging sensation on their backs. Online forums and comment sections find many possible causes of these unusual scratch marks.

Some other explanations include medical, while others are supernatural. The two most popular medical explanations are scabies and dematographia.

Scabies is a “highly contagious skin disease” that causes relentless itching. The Sarcoptes scabiei itch mite is responsible for this skin disease. The symptoms include “a skin rash composed of small red bumps and blisters, and sometimes tiny red burrows on the skin that affects specific areas of the body.” It is most commonly transmitted by sexual contact, although it can be contracted by “simple skin-to-skin contact.” Over the counter medicines are ineffective and it requires a prescription drug either oral or topical to cure the disease (2).

According to the Mayo Clinic, dematographia is “a condition also known as skin writing.” Those suffering from this condition can scratch their skin very lightly and “the scratches redden into a raised wheal similar to hives. These marks usually disappear within 30 minutes.”

Unfortunately, the cause of dematographia is unknown, although for some people, “it can be trigged” by “infections, emotional upset or medications such as penicillin.” The Mayo Clinic states that the majority of people suffering from dematographia don’t seek medical treatment; however, if the symptoms are severe, allergy medication is often prescribed, such as Benadryl (3). 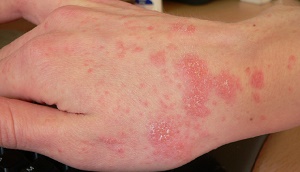 Prednisone has also been offered as a possible cause. Prednisone is given to patients for various allergic conditions, skin conditions and inflammation. While effective, it also thins the skin. With the skin layer being thinned, friction from clothing and other things can leave trails of eruptive skin that resemble scratches (4).

Aside from lice and mites, other possible culprits include fleas, bed bugs and flies. These can also create itchiness that can lead to scratches and even infections (5).

Several forums have suggestions that the person use the over-the-counter permethrin, that is often prescribed for scabies. According to the National Institute of Health, this comes in a cream or lotion and usually only requires one treatment (6).

Many of the reports of unexplained scratches come with suspicions of demonic attacks. Many of these instances involve a burning sensation followed by the discovery of scratches, often a set of three fairly straight lines on the skin where the burning sensation began (1).

Some of those suffering from this type of scratches claim that the marks are typically in sets of threes that appear on their backs, arms, legs and even faces. Some people claim to also have bite marks. Others also find various unexplainable bruising on their bodies.

One person attested to finding similar scratch marks on surfaces in the home. One person stated that these incidences happen when the victim is under some type of stress, such as life pivotal decisions or temptations the person is struggling with (7).

According to Manchester Paranormal Investigations (MPI), demon attacks are rare and what many people interpret as demonic is often an angry spirit. In discussing the ways demons contact people, MPI states, “They [demons] often make contact by pushing, hitting, and more commonly scratching. Scratches, welts, and even bite marks can be seen as a result” (8).

The number of people experiencing unexplained scratches is worldwide according to the various forum and other Internet comments.

While there are possible explanations for the majority of these, many believe they are experiencing a paranormal or supernatural phenomena.