Mark Whittington view more articles
Facebook 0 Twitter 0 Pinterest 0 Google 0 LinkedIn 0
Of all the conspiracy theories that lurk out in the fever swamps of the Internet, none is more curious than the 9/11 Truther movement.

The 9/11 Truthers believe that the greatest attack on American soil since Pearl Harbor was the result of a conspiracy by the Bush administration to fake the atrocity in order to justify the wars in Afghanistan and Iraq as well as an assault on civil liberties.

What millions of people saw clearly on their television sets on September 11, 2001, did not actually happen the way it appeared to happen, according to the conspiracy theorists.

A 2005 article in Popular Mechanics (1), which was later expanded into book forum, thoroughly debunked the 9/11 conspiracy theories. Indeed, to believe such theories, one has to have a willful ignorance of physics, metallurgy, Middle East history, and the workings of American government, among other subjects.

Of course, because of the will to believe, no conspiracy theory can ever be entirely stamped out. A case in point is a post that went up a year ago on The Rundownlive (2) that suggested that conspiracy theorist Bill Cooper predicted 9/11 in a June 2001 shortwave broadcast and was in due course hunted down and killed in November of that year.


A Bit of Background

Cooper based his premise on a couple of facts. First, Osama bin Laden had been threatening to attack Israel and the United States for years. Second, he claimed that Bin Laden and Al Qaeda were a front for the CIA, dating back to the Soviet invasion of Afghanistan, and were being used by the United States government to bring about a world government. T

he CIA had failed to find and terminate Bin Laden with extreme prejudice because it did not want to. In the meantime, a CNN camera crew managed to get an interview with the terrorist chieftain.

The broadcast from June 2001 was a long, rambling discourse that touched on the Gulf War and Saddam Hussein (another CIA creation) and boasted that he, Cooper, could easily take Bin Laden, given sufficient resources. Cooper suggested that the Bush administration was plotting to use Bin Laden to do a modern-day version of the Reichstag fire to justify the institution of a tyrannical “new world order.”

Private firearms would be confiscated. Political dissidents would be rounded up (3) and sent to concentration camps.

Cooper started out as a UFO conspiracy theorist, positing a government conspiracy similar to the one depicted in the TV show The X Files (4).

He later drifted into the militia movement, with the publication of Behold a Pale Horse. He suggested that the spread of HIV/AIDS was part of a government conspiracy to kill African Americans, Hispanics, and gays.

The Kennedy assassination, the Jews, Timothy McVeigh, and the Illuminati also figured in Cooper’s theories.

Cooper was charged with tax evasion in 1998. He managed to evade justice for over three years while still broadcasting his conspiracy theories.

He was killed in a shootout with sheriff’s deputies in Apache County, Arizona in November 2001. Of course, some conspiracy theorists believe that Cooper was killed as a part of a targeted assassination. 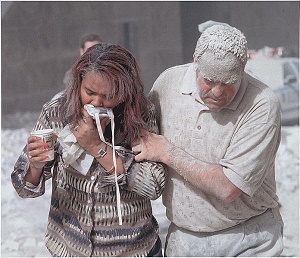 The report of the 9/11 Commission (5) exhaustively examined the various intelligence failures leading up to the attacks.

Essentially the failure was caused, primarily, by a Clinton-era policy that prohibited intelligence agencies from communicating with law enforcement.

While information existed that something was up, no one person or group of people had every piece of intelligence that might have been brought together to ascertain the plot before it was consummated. The policy was quickly rescinded as part of the Patriot Act that passed in the wake of the 9/11 attacks.

Cooper’s “prediction” can be ascribed to the principle of a stopped clock being right at least twice. That Al Qaeda wanted to do America harm was well known in the summer of 2001.

But no one had foreknowledge of the actual plot, and certainly it was not conducted with the cooperation of the United States government. There was a conspiracy, but it was one conceived and executed by Islamist terrorists and not Bush, Dick Cheney, and their oil company buddies.