4 of the Most Recent UFO Sightings Shared at Reddit 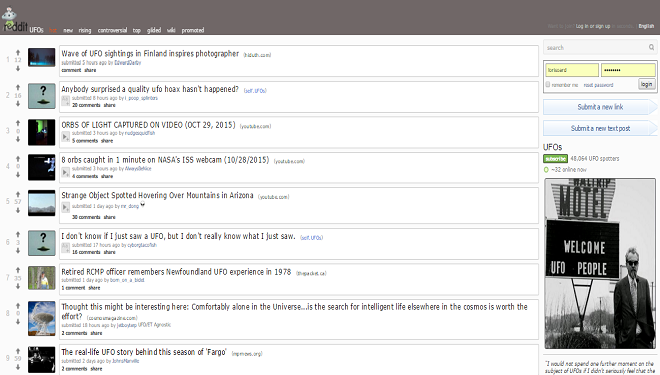 Just about everything and anything can be found there. So it is a useful place to check in about recent UFO sightings (1), or at least recent accounts of past close encounters.

Most of the stories involve people seeing mysterious things in the sky, but at least one object interacted more directly with a family of Earthlings.

A poster called Cool_Calm_Collected recounts a story (2) from his youth when he and his cousin were being taken to karate practice by their mothers in a suburb of Chicago.

He noticed a UFO in the clear, afternoon sky next to a cloud and directed his cousin’s attention to the object. The UFO hovered for a few seconds and then flew into the cloud. Neither mother saw the object and were skeptical that their offspring had seen anything either.

On January 20, 1988, Faye Knowles and her three grown sons Patrick, Shawn, and Wayne were traveling in their blue sedan down a road on the Nullarbor Plain in the southern part of Australia when they spotted a bright light in the sky (3).

Sean, who was driving the car, sped up to get a closer look. The light resolved into an object that shone a white light with a yellowish center in front of the speeding vehicle.

Panic began to set in as the object moved over the Knowles’ car. Sean swerved into the opposite lane and almost hit an oncoming car.

The other vehicle, a station wagon, avoided the collision and moved down the road, the object now giving chase. Sean made a U-turn and went in pursuit of the object. Then, thinking the better of that plan, the Knowleses made another U-turn and proceeded back toward their original destination.

A little while later an object landed on top of the car, and the Knowles family began to feel a sense of elevation, as if the car were being lifted into the air. Things got a little confused after that, with the members of the Knowles family remembering a buzzing sound and the smell of decomposing bodies.

The next clear memory was of the car dropping back to the pavement and the tires blowing out on impact. Sean managed to stop the car by the side of the road. After that the Knowles family left their vehicle and fled in terror.

A poster who goes by the name of huffandpuffliteratur recounts a recent incident (4) involving his mother. The poster’s mother, who has to use a walker to get around, had taken the dog out to do his business when she saw an object above her apartment complex. The object turned into a ball of fire and then into the moon.

The mother frantically called and texted the poster, terrified that the object might crash into the apartment complex.

A police officer arrived to take down a statement after an hour had passed, and the object was gone. He asked whether the mother was suffering from Alzheimer’s or some other form of dementia.

The poster maintained that no history of mental illness existed in his family and that his mother had already taken tests from her physician to determine the cause of reoccurring memory loss. She was assured that it was the result of stress and nothing more. The dog was apparently traumatized by the experience as well.

Finally, a poster named punknub, who lives in a suburb of Kansas, gives an account of a UFO sighting (5) during the recent blood moon. As the lunar eclipse was reaching maximum, he and a friend noticed a faint light in the sky moving at a steady pace. He claimed that it did not look like a plane or a shooting star. The light moved across the sky until it either moved out of sight or he lost track of it.