Aliens in the Outback: The Knowles Family UFO Attack 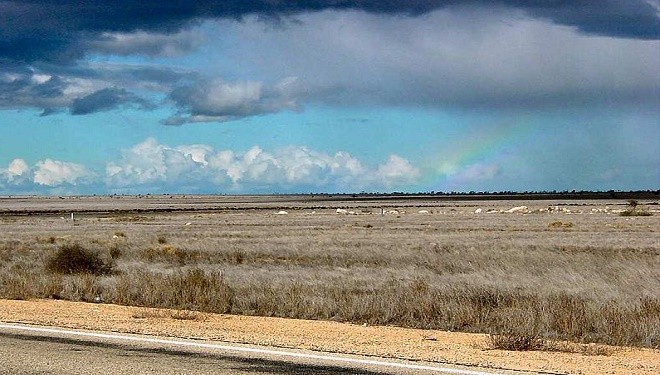 SallyPainter view more articles
Facebook 0 Twitter 0 Pinterest 0 Google 0 LinkedIn 0
The 1988 UFO encountered by the Knowles family is not a typical UFO story. What sets this encounter apart from others isn’t just the bizarre incident but also that there were witnesses. The event occurred around 5 a.m., and at one point the family drove 200 kilometers per hour in an attempt to outrun the UFO (1).

On January 20, 1988, Faye Knowles and her three sons–Patrick (24), Sean (21) and Wayne (18) along with their two family dogs were traveling in Southern Australia through the Nullarbor Plain – destination Melbourne.

The Nullarbor Plain covers around 77,000 square miles and is the “world’s largest single exposure of limestone bedrock.” This semi-arid environment is known for a high-rate of UFO sightings, although few witnesses have historically reported their sightings (2).

The Knowles family’s sighting moved the world’s spotlight onto this region of the globe and subsequently other UFO stories began to emerge (3).

The Knowles family first spotted a bright light off in the distance in front of them. The middle son, Sean, was driving the family car with Patrick riding shotgun. Faye and her youngest son, Wayne, were sitting in the back seat. The family noticed that the light continually grew brighter the closer they got. They later described the object simply as a blinding light.

At one point, Sean decided to speed up in an effort to see what it was. To their surprise, when they got closer, they discovered the light was egg-shaped. Some reports state the family described the object as resembling an egg resting in an egg cup with a yellow center.

As Sean continued to drive toward the UFO, it suddenly emitted an angular white light about three feet wide. When the beam moved about the road just in front of the car, the family panicked and Sean swerved to avoid the light. Their car was now traveling in the opposite lane and directly in the path of an oncoming station wagon.

A Couple of U-Turns

Concerned for the occupants in the other car and more than a bit curious, Sean made a precarious U-turn in the road to chase after the station wagon and UFO. They quickly gained speed and nearly caught up with the car and UFO when according to Faye Knowles, a “dark feeling” gripped both her and her sons.

At that point, the family decided it wasn’t such a good idea to pursue the UFO and once more made a quick U-turn in the road, resuming their original direction toward Melbourne. They agreed that to stop at the next available phone to report the incident to the authorities.

Suddenly, the car bounced downward as it gave under the pressure of something very heavy landing on top of their car. Sean had a difficult time keeping the car on the road.

Much to their surprise and terror, the car began to lift from the road. Faye, still in the back seat, rolled the window down and reached up to see if she could feel anything on top of the car roof. To her surprise, her fingers met what she described as being hot, spongy and rubbery.

When she drew her hand back inside the car, it was covered with a dark dust that was very fine and powdery. The car was suddenly filled with a cloud of the same kind of dark dust that entered through Patrick’s open window (4).

The family reported that the dust carried a foul odor that reminded them of a decomposing body. Following the cloud burst of black dust and putrid odors, a high-pitched sound buzzed in the car, driving the family dogs into frenzied barking.

The family claims they were quickly overcome with feelings of being disoriented and that their voices now raised in screams grew lower in pitch and slower in sound. It was as though they moved in slow motion.

The oldest son, Patrick told reporters, “I felt like my brain was being sucked out…”

His mother described the sensation as though “…something was going into our heads.” At this time, Faye recalled that they all thought they were going to die.

The family next lost all sense of time that ended abruptly when the car returned to the pavement and one of the tires blew out. Sean was able to bring the car under control and braked it to a stop, pulling onto the side of the road.

The family piled out of the car in terror and quickly found cover behind the roadside brush, hiding from the object that was nowhere to be seen. Afraid that the UFO would return, they remained hidden in the brush for around 15 minutes before venturing back onto the road. They quickly changed the tire and resumed their journey toward Melbourne, ever watchful for the return of the UFO.

When they arrived in the town Mundrabilla, Sean stopped at a gas station. That’s when they met Mr. Graham Henley a truck driver who told the Knowles he’d witnessed the strange light on the road. Another motorist also bore witness as well as several other reports of an intensely bright light in the sky.

Researchers Give Explanation for UFO Encounter

The experts that later examined the car stated that the black powder was in keeping with the dust found in brakes.
However, a 1990 UFO Report filed by Timothy Good reported that in July 1988 Dr Richard Haines at Philips Laboratory analyzed the dust taken from inside the car and found it to be different from the exterior dust (5).

Other debunkers stated that the blown tire bore evidence of having been driven on the wheel rim for some time. As for the UFO, there were no traces of radioactivity on or in the car. Scientists explained that what the family experienced was the rare event of a disintegrating meteorite, that would have been hot and foul smelling.

The family car was auctioned off after the family couldn’t keep up the payments. They were ridiculed and promise money by a marketing firm that never materialized. In the end, they simply wanted to fade into the background and pick up their lives once more.

In the face of seemingly authoritative explanations for the UFO, tire and black dust, the Knowles remained steadfast in their story. They never wavered, stating they knew what they’d experienced. There are two camps when it comes to this UFO story. One believes plausible explanations were given while the other strongly believes that the Knowles lived through a harrowing UFO encounter.