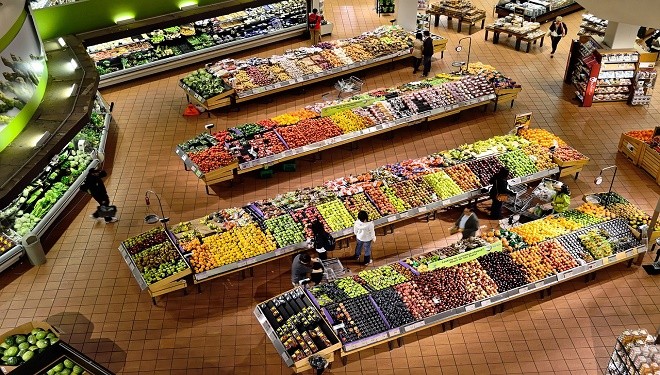 SallyPainter view more articles
Facebook 0 Twitter 0 Pinterest 0 Google 0 LinkedIn 0
Many people don’t consider the companies supplying their food in grocery stores. In fact, the process of growing, harvesting and commercializing foodstuff isn’t something most people think about when standing in the grocery store checkout line.

CC quickly points out that these “mammoth corporations are not in business to look out for the best interests of the American people. Rather, the purpose of these corporations is to maximize wealth for their shareholders.”

If the health of consumers isn’t the number one priority, then it’s not surprising that the food the average American purchases at the local grocery store might not be the healthiest food to eat. Shelf-life is a determining factor for what additives and chemicals are included in each type of food (2).

A prolonged shelf-life also takes into account from the time the food is produced, packaged and transported then placed on the shelves. Preservatives are a must for this type of mass food production, especially when it’s not going to just local grocery stores, but is shipped across the country (3).

These additives and preservatives aren’t healthy and according to CC, “…we just keep getting sicker and sicker as a society. But these big corporations are raking in big profits, so they don’t really care.”


Why American Food Companies Get Away Using Preservatives and Chemicals

What exactly happened that allows these corporations to get away with such unhealthy foods? CC explains that it’s due to a lack of competition. This is logical. If you live in a very small town where the plumber or the electrician has no competition, chances are, you’re stuck with the skill level of that trade’s craftsman.

This falls into the field of controlling a market. Just like the small time plumber who doesn’t have to step up his game or even change his game and knows customers will just have to be satisfied with whatever he does, so do the food companies.

That’s because they have such a monopoly over the food industry. In fact, CC states that marketing experts consider the concentration ratio of economic sectors that are 40% and higher an indication that 40%+ have an unfair control of the market.

Those companies holding the 40% place present a threat to competition and “market abuses are more likely to occur: the higher the number, the bigger the threat.”

Organic solutions according to CC aren’t necessary going to save you from this kind of exploitation since many of the companies producing and selling organics have grown into conglomerates and many have been gobbled up by non-organic food corporations. This still creates a monopoly even though it may be healthy food.

And, that is truly the point. Any time the control over a commodity has only a handful of suppliers, there is that risk. A risk that you are at the mercy of the supplier. The days before large grocery chains, produce was grown and sold locally. The community supported itself with local farmers and growers. It was an age old system that worked. In addition, people ate seasonally. This presented challenges and summer bounty crops were preserved through canning and drying. Meats were cured, dried, canned and later frozen. Seasonal crops supplied fresh foods while the preserved foods carried families through the winter.

Many people have recognized the threat of food monopoly and have taken steps to be more self-sustaining by growing organic foods and many have turned to homesteading as their solution. Unfortunately, most American families rely on grocery stores and large agriculture food companies for the majority of their food. This dependency has been cultivated into the modern American food supply and distribution system.

Even fast food chains and restaurants contribute to this kind of food dependency and worse, add to the amount of chemicals and additives in the American diet (4). Just take a step over to Food Babe’s blog to see what Americans are being sold compared to what the same food companies are selling to Europe, specifically the UK (5).

For example, McDonald’s sells the English organic milk with their happy meals and of course, for tea and coffee. Organic milk! Have you ever seen organic milk offered at an American McDonald’s? It doesn’t stop there. Examining the differences in the oil used for French fries, Food Babe points out that the US has more additives and chemicals than the UK. If you don’t believe Americans are being fed inferior foods, just listen to what The National Academies Press book release titled US Health in International Perspective says:

… Americans live shorter lives and experience more injuries and illnesses than people in other high-income countries. The U.S. health disadvantage cannot be attributed solely to the adverse health status of racial or ethnic minorities or poor people: even highly advantaged Americans are in worse health than their counterparts in other, ‘peer’ countries” (6).

While there are many contributing factors to the increase in obesity, diabetes and the overall poor health of the American population, diet plays a significant role. More and more Americans are taking the time to understand what is in the foods purchased at grocery stores or drive thru fast food restaurants. It takes time to become educated about foods, but in the long run, it’s better than blindly buying whatever is placed on the grocery store shelves.

References & Image Credits:
(1) Collectively Conscious
(2) TSW: Food Additives that Are Dangerous
(3) TSW: The Poison in Your Food They Don’t Want You to Know About
(4) TSW: New Fast Food Standards Reveal How Gross the Food Was Before
(5) Food Babe
(6) NAP