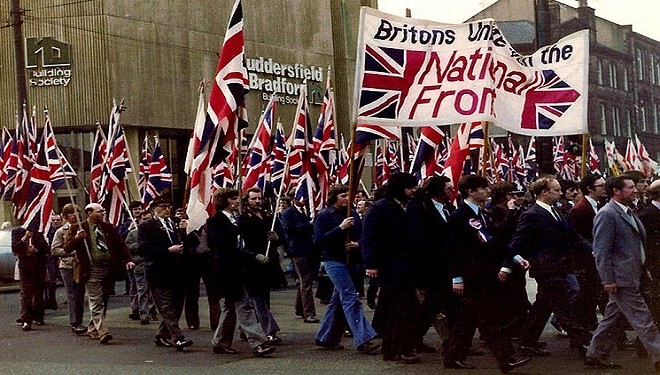 GabriellePickard view more articles
Facebook 0 Twitter 0 Pinterest 0 Google 0 LinkedIn 0
Here at Top Secret Writers, a number of our articles are focused on Nazism and its legacy and we thought our readers would be interested in reading about how the British Nazi Party eventually went underground (1).

The British Nazi Party was a British neo-Nazi group which was formed by Terry Flynn in 1977. The party is also referred to as the November 9th Society or simply N9S. Under Flynn, the British Nazi Party acted predominantly as a pressure group and has been involved in sporadic activity.

The British political and activism website Stormfront.org claims the group had 120 members though lower numbers have been cited (2).

The Party encouraged a hierarchical system based on leadership, British ownership of industry, the nationalization of British media and a centralized government banking system, as well as repatriation and Holocaust denial. It campaigns against homosexuality, non-white immigration, communism, foreign aid and abortion.

As a Digital Spy forum states, members of N9S are even critical of the British National Party, who they deem as too moderate, referring to them as “Conservatives on steroids” (3).

However, the British Nazi Party began to lose its credibility – if it had any in the first place – among other right-wing groups, which turned their backs on the N9S for its inability to be a “serious contender in British politics.”

When the British First Party (BFP) was formed, the N9S’s slogan “We will never change to flirt with public opinion” is said to have come to an end.

The forming of the BFP created friction and led to members of the N9S leaving the group and joining the BFP. Under the leadership of Kevin Quinn, the British First Party has taken a more active role in politics in the UK.

In the 2007 local elections in Sunderland in the North of England, the BFP even had two candidates running in the election.

According to the First British Party website, which incidentally no longer exists, in a separate constituency, a BFP candidate earned 257 votes out of a total of 2293, which saw the BFP member finish ahead of the Liberal Democrats and just three votes behind the British National Party.

The BFP have also been active in far-right demonstrations. One incident took place in 2005 and 2006 when BFP members demonstrated outside the Austrian embassy in support of David Irving. Irving was on trial in Austria for Holocaust denial and was subsequently put behind bars for three years.

Evidence of how this British neo-Nazi group has eventually gone underground can be found through the fact that all of the websites associated with the Party and listed Stormfront.org, are no longer in operation.

For example, the site BritishNaziParty.co.uk is no longer an active site. Neither is the N9S.co.uk site, which can longer be found. Nor can the other sites that were presumably once advocates of the party.

According to one report, it was in December 2010 that the British Nazi Party was forced underground.

However, with many of its members moving to the BFP, it seems the N9S’s mission and followers continue.

Now under the guise of Britain First, this far-right British nationalist party which was formed in 2011 by former BNP members, encourages fellow British patriots, to join forces and “make a difference” (4).

Campaigning primarily against mass immigration, multiculturalism and what the group deems as the “Islamization” of the UK, the British Nazi Party might have gone underground but there are plenty of far right organizations in the UK that have filled its place.