Life on Mars – Does Water Increase the Odds? 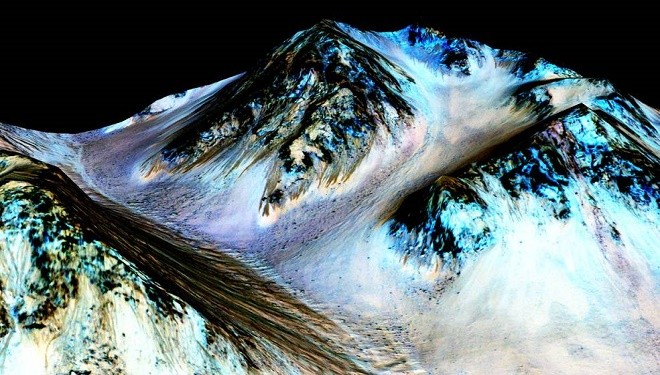 Scientists have been aware that water exists on Mars frozen at the poles along with carbon dioxide ice and they have surmised that it exists in deposits underground. Where there is water, there might be life. The discovery of life on another world, albeit as a microbe, has been one of the holy grails of the space program from the beginning.

The findings were the result of studies of images taken by the Mars Reconnaissance Orbiter (2) of streaks on the slopes of craters, canyons, and mountains. The streaks appeared during the Martian summer and vanished during the winter.

An analysis of the streaks showed them to be hydrated salts, a residue left behind when salt water flows or seeps across the ground. The water may have come up from subsurface aquifers or may have condensed from the surrounding, thin Martian atmosphere.

The question therefore arises, is there life on Mars? The evidence suggests, as the BBC reported (3), probably not, but there exists a slim possibility.

The Viking 1 lander seemed to have detected indications of life in a soil sample, but that soon was judged to be a false positive. The European Mars Express detected traces of methane in the Martian atmosphere. Methane is created by the decay of living organisms or by geological processes such as volcanism. The gas was detected again more recently by the Mars Curiosity rover.


Was Mars Once a Different World?

Currently, Mars is an arid world, extremely cold, with a tenuous atmosphere, and bombarded with radiation. Thus the Red Planet is hardly a great candidate for having lifeforms, except perhaps in those underground aquifers.

By the way, the water that occasionally shows up on the Martian surface likely does not have life. The water is too salty.

Billions of years ago, Mars was quite a different world, with a thick atmosphere, running water (4), and perhaps complex lifeforms. But over time, because Mars lacks a magnetic field to protect it against solar wind, the atmosphere gradually leached away into space.

The water was broken down into hydrogen and oxygen by sunlight, which also leached away into space. What was left became frozen at the Martian poles or deposited underground. Whatever life forms that existed on early Mars either died out, or linger underground.

So, how would NASA or some other space agency search for life on Mars? As DNA India reported (5), there is a fly in that ointment. The Mars Curiosity is near some of the areas where the streaks have been found. However, the space agency has resolved to steer the rover clear of those areas precisely because of the possibility they might contain life.

The reason for the reticence to go for where the surface water may be flowing is that Curiosity likely has Earthly microbes piggy-backing on it. To be sure, the harsh conditions of space flight and the Martian surface likely have killed most if not all of those tiny Earth organisms.

However, scientists are paranoid about the possibility that Earth microbes will find a new home on Mars, contaminating the planet and forever denying researchers the opportunity to study Martian lifeforms in their pure state.

Protocols are going to have to be developed to make sure such contamination does not happen. Rovers will have to be sterilized thoroughly before they are sent forth to Mars. When humans finally land on Mars, they will likely stay away from any areas where life might linger, sending tele-operated robots to collect samples that could be studied at leisure at a Mars habitat.

What if Martian life is never found? Then, people from Earth will, in the fullness of time, settle on the Red Planet (6) and make a new home 100 million miles from the planet of their birth.

Like Mark Watney, the hero of the recent film “The Martian,” these settlers from Earth will become the first lifeforms on Mars in billions of years.