The Strange Story of Dr. Frank Stranges and His Friend From Venus

SallyPainter view more articles
Facebook 0 Twitter 0 Pinterest 0 Google 0 LinkedIn 0
The story of Dr. Frank Stranges (1927-2008) is one that is either believed, partially believed or simply dismissed as another alien conspiracy theory.

However, this story, unlike many other alien encounters, isn’t fraught with threats, world domination, hybrids, abductions or any of the fodder so commonly found in such alien stories.

In fact, this alien story is about spirituality and an underlying theme that paints the leaders of America during 1957-1960 as being short-sighted, greedy and fearful.

These leaders supposedly made a decision for the rest of the country and subsequently the world that negatively affects the lives of every person on Earth to this day. That is, if you believe the story of Commander Valiant Thor (Val).

But this story isn’t just about aliens attempting to help humanity; it mushrooms into an outreach program. President Eisenhower took the advice of his team, also referred to as the Majestic 12 (1), a well-known circle of men former President Truman installed as watchdogs. Once Commander Valiant Thor’s offer to bestow this wealth of knowledge was rejected, he sought out others who would be more receptive.


Visitors from Venus Land in Virginia

This story begins in 1957 when a human alien from the planet Venus, Valiant Thor (Val) and his crew of three landed in Alexandria, VA. The story states that alien commander, Val asked to speak with the President and was first taken to the Pentagon, then shuttled underground to the White House. He met with President Eisenhower and revealed his benevolent mission to Earth (2).

According to The Living Moon website, this landing and subsequent meeting with Eisenhower was chronicled in Project Blue Book by Harley Andrew Byrd, late Rear Admiral Richard R.E. Byrd’s nephew. The report of this incident was supposedly filed as “The Valiant Thor Landing 002741-57 Room 4D-717 Project Blue Book” (3).

This landing is “perhaps the first documented landing of a human-type alien by military officials.” The mission of these Venusian emissaries was simply to share knowledge and truth to all of mankind.

According to Dr. Stranges, Val and his crew offered to bestow the knowledge to Americans that would enable them to live “without sickness, poverty, disease and death.”

Stranger at the Pentagon

Dr. Stranges writes in one of his books, Stranger at the Pentagon, that this amazingly generous offer that had no strings attached was pondered by Eisenhower and his advisers for a year and finally rejected. The alien’s offer to elevate humankind was swiftly rejected out of fear.

The President’s military and economic advisers warned that to give the public such knowledge would upset the delicate balance of the economy. More importantly, they feared that such powerful knowledge would put an end to their current control over the masses. In fact, their greatest fear was that the world would choose to follow Val and not the leaders of their respective countries. So, the offer made by the Commander (Val) was turned down. That rejection was, to those who believe the story, the greatest gift presented to the modern world.

Val stayed on as the government’s guest, kept under close guard, for three years. Dr. Stranges writes that Val could dematerialize and rematerialize anywhere in the world and he did.

Stranges came onto Val’s radar through Nancy Warrant, a Pentagon “advocate of the UFO alien situation.” Warren contacted Stranges, who was a “private investigator and theologian.” Dr. Stranges was also “a guest speaker at the National Evangelistic Center for two weeks.”

Dr. Stranges writes that he had multiple meetings with Val. He was even invited onto Victor 1, the commander’s spaceship. Some of the knowledge imparted to Stranges included interdimensional flight and time travel, the inner Earth South Pole opening, the fact that the Earth is hollow and “civilization upon civilization” exists inside the Earth, including descendants of Noah and civilizations from “outer space.”

In the meantime, Val served as a consultant to the President and his advisers. He advised them on many national and international matters for the next three years. Dr. Stranges claimed that “Val Thor stayed on Earth until March 16, 1960, and then disembarked to his home planet Venus.” 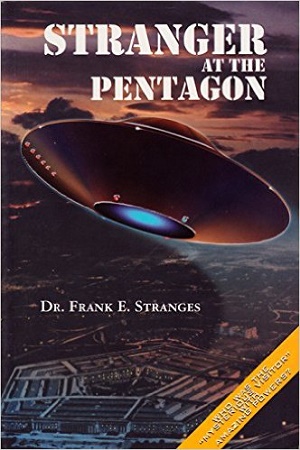 FBI File on Dr. Stranges and His Message of Hope

According to the FBI vault, “The National Investigation Committee on Aerial Phenomena has corresponded with the Bureau (FBI) since 1957, forwarding various material concerning flying saucers.”

FBI letter to J Edgar Hoover Director FBI from Richard Hall Secretary of NICAP (National Investigations Committee on Aerial Phenomena). In April 1962, the FBI investigated two letters stating Dr. Stranges had claimed to be associated with the FBI, but the FBI was unable to substantiate these accusations (4).

According to Rob Potter of The Promise Revealed, Dr. Stranges told him of three failed attempts on his life. Each one, Stranges claimed, was intervened and prevented by Val or one of his team (5).

The message that Dr. Stranges wished to convey to anyone who would listen was that, “Jesus Christ is God come in the flesh and there is a path which will bring you back into harmony with His Perfect Will.” This message was also relayed by Commander Thor and his crew.

Whether you believe the story of Dr. Stranges and Commander Valiant Thor or suspect they are both a bit insane, the message behind these men remains one that many people in today’s world find comforting and filled with hope.