Is Another American Revolution Inevitable? 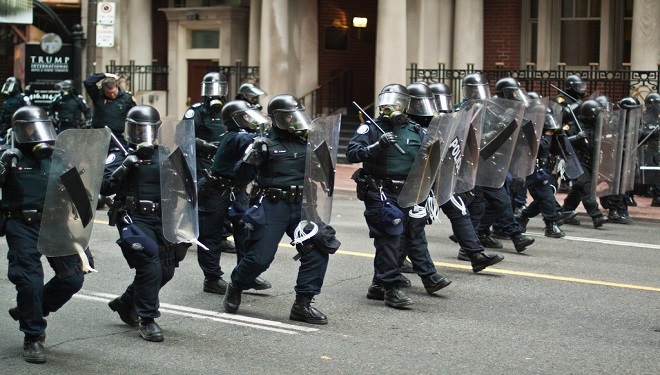 Jeri Simpson view more articles
Facebook 0 Twitter 0 Pinterest 0 Google 0 LinkedIn 0
As a country, the United States of America has a long history. Compared to other countries, that have been established far longer, the U.S. has managed to make plenty of waves from the very beginning.

The United States was founded on revolution. In the 18th century, the men and women who had colonized the land in pursuit of religious freedom declared that they had had enough of Britain’s monarchy and aristocracy and decided to revolt for their freedom (1). With aide from French, Dutch, and Spanish allies, independence from Britain was a success.

The polarizing move led to the independence and formation of the country, but not before dividing the countrymen during the American Revolution. There were the Patriots, the group leading the revolution, and the Loyalists, who swore allegiance to the crown (2).

Since those fateful days, the country has seemingly been caught in a state of perpetual bipartisanship. Republican versus Democrat, the North versus the South, the Left versus the Right, Liberal versus Conservative – it’s gone on for ages. Some would say the country has essentially waged war on itself since its inception.

Even the government officials themselves are divided. In a system of bipartisan multi-tier government, it’s truly impressive that anything is completed.

The divided nature of the country has brought on everything from heated dinner conversation to full fledged war with brothers fighting on opposing sides. With the current state of American bipartisan affairs, it seems only inevitable that a revolution is upon us, unmistakably pitting family against one another once more.

At the root of every divide, you’ll find a passionate political opinion. The government, a group formed to embody the best interests of the people, struggles to appease the constituents with such opposing ideals.

Some say the government is too involved in a person’s life, while others say it’s not involved enough. Some say taxation is necessary while others desire a more removed approach. Some say we should rely only on ourselves while others adapt a more egalitarian ideology.

Under the so-called protection of the First Amendment, citizens are very publicly speaking out about politics. Whether it’s from the keyboard battlefield of their laptop or the poster board world of picketing, opinions are being shared. As Americans rise to speak out in favor or in opposition to their government, the one blaring mark is seemingly no one is satisfied.

The U.S. people have reached a turning point. In recent years, civil unrest has becoming increasingly more noticeable. From the Occupy Movement to the Ferguson unrest, Americans across the country are stepping up and speaking out about dissatisfaction with the government (3)(4).

The government is even bracing for the likelihood of a revolution. The Department of Defense created the Minerva Project in 2008 with plans to model the elements of civil unrest and prepare military officials for the situation (5).

The Minerva Project is clearly utilizing social science in an attempt to identify and control any potential “risks.” When combined with the National Security Agency’s mass surveillance of U.S. citizens, the efforts of the project becoming increasingly apparent.

The real question is not whether there will be a new revolution, but really who will be the Patriots and who will be the Loyalists? Will it be similar to the founding Revolution with a fifteen year mental war before action is taken (6)?

When a Revolution does happen, what impact will it have on the United States as we know it? When and where will lines be drawn? Where will you stand and will your loved ones stand beside you?