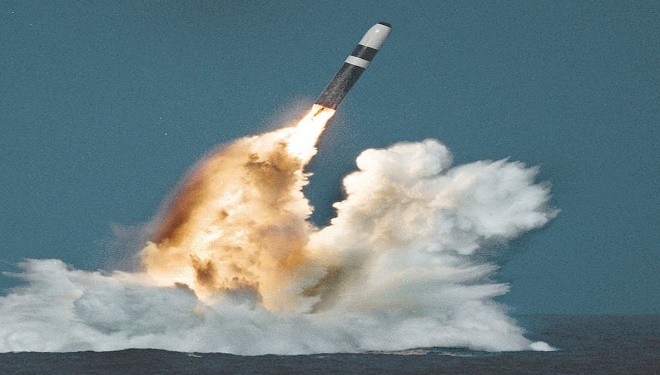 Mark Whittington view more articles
Facebook 0 Twitter 0 Pinterest 0 Google 0 LinkedIn 0
At first glance, one wondered what the United States Navy was thinking of when it launched a Trident missile from the submarine Kentucky, an Ohio-class missile boat, off the coast of southern California near sunset. What happened soon after, with people in California and Arizona assuming that either a nuclear bomb had gone off, or an alien space craft was buzzing the area, was entirely predictable.

The test was conducted at the Pacific Missile Test range northwest of Los Angeles (1). The Navy regularly tests cruise missiles in the range to ensure their reliability.

So it was with the Trident, one of the three parts of America’s nuclear deterrence “triad” the other two parts being land-based missiles and crewed bombers. Even decades after the end of the Cold War and deep strategic arms reductions that followed, the United States maintains a nuclear arsenal just in case another nuclear power decides to break the peace and use weapons of mass destruction.

The missile in question was a Trident II D5 (2), currently in use by the United States and the British Royal Navies.

It is a three-stage missile that is ejected from the submarine’s launch tube by expanding gas. As soon as it clears the water, the Trident’s first-stage rocket engines ignites and sends it on its way. The missile is thought to have a range of more than 7,456 miles, though the exact range is classified.

Each Trident contains up to 14 independently maneuverable thermonuclear warheads. Since every Ohio-class submarine carries 24 Trident missiles, they are the deadliest weapons platform ever built. The Trident has been successfully test fired 150 times. The most recent test, of course, did not use an armed missile. It was by all accounts entirely successful.

While the Navy did not announce the test in advance, it telegraphed that something was up by suspending air traffic in and out of Los Angeles International Airport over the Pacific Ocean.

Airliners generally fly in and out of LAX over the Pacific to avoid disturbing residents on the ground. The Navy did not disclose why it was closing the air space.

When the Trident lifted off over the Pacific, it was entirely visible against the dark sky across Southern California. Eye witnesses took to social media to post videos of what they thought was a mysterious light in the sky, but was actually a missile test (3). Local news channels reached out to the authorities to find out what the object was.

Speculation ran rampant about what the object was. People who witnessed the launch from the California coast wondered whether it was a nuclear explosion.

As the missile rocketed across the night sky, people who witnessed it wondered whether it was a UFO, a comet, or even a large meteor. The videos that were posted to the net show a small object hurtling across the sky, with an exhaust trail behind it (4).

Strange Lights in the Sky

People have been seeing strange lights in the sky for decades. The UFO phenomenon (5) has created an entire subculture of people who believe that Earth has become the Grand Central Station of the universe, with aliens popping by to pay a visit with remarkable frequency. Social media has proven an effective medium for sharing information and spreading rumors about such sightings.

The good news is that the Trident test was not an alien spacecraft. The aliens did not fly over Southern California to do who knows what.

The bad news is that the light in the sky was the test of a nuclear missile. Over 20 years after the fall of the Soviet Union, the threat of a general thermonuclear war still exists, albeit at a lower level of threat than during the Cold War.

One can never know what Vladimir Putin, the leaders of China, or North Korean’s Kim Jong-un, all of whom have control of nuclear weapons, will do.

The Trident test not only served the purpose of making sure that the missile still works, but to remind leaders of other countries what can still happen to them in the last extremis.