The Missing People of Yellowstone: A Government Cover-Up?

Mark Whittington view more articles
Facebook 0 Twitter 0 Pinterest 0 Google 0 LinkedIn 0
David Paulides (1), a former detective for the San Jose Police Department, has stumbled upon a vexing mystery concerning clusters of missing persons who vanished in a variety of national parks, including Yellowstone. According to a post in YourNewsWire (2), a number of odd circumstances surround these missing person cases that cannot be easily explained.

Millions of people visit American national parks every year. Of those millions, hundreds turn up missing. Most of these cases can be attributed to misadventure, people falling off of cliffs or into rivers, animal attacks, and hikers getting lost. These people or their bodies are generally found in short order by park rangers with tracking dogs.

A number of missing person cases, grouped together in 35 clusters in and around wilderness areas, particularly national parks, defy conventional explanations. Many of them involve young children or teenagers who simply vanish without a trace.

A few have been found hours later, many miles away, at such a distance over rugged country that it would not be reasonable for them to have gotten there in the time allotted. Some are missing clothing and have horrible scratches on their bodies. All seem to lack memory of what exactly happened to them.

A few bodies have been found, with clothing stripped from them. Most of these missing people, after an extensive initial search comes up empty, have never been seen or heard from again. Aside from a few objects or articles of clothing found, it is as if they had been teleported from the surface of the earth.

Just to spice up the story a little, the National Park Service does not maintain a readily accessible database that lists people who go missing in national parks. This oversight is despite the fact that national parks are considered federal land, and the NPS has its own law enforcement and investigation agents. Most data on missing persons from national parks is scattered at local law enforcement agencies where the reports are first filed.

Paulides, besides having written books about these disappearances, has written about Bigfoot, the primate creatures that many people believe dwell in wilderness areas in North America. He is careful not to offer theories as to how these unfortunate people are going missing. But the mysterious circumstances coupled by the odor of a government cover-up should give rise to all sorts of lurid theories.

The FBI reports that at the end of 2013 some 84,136 missing person cases existed in the United States (3). As some cases are closed, more people go missing. For the most part, people go missing because they are abducted, suffer an accident and are incapacitated, or because they want to disappear. 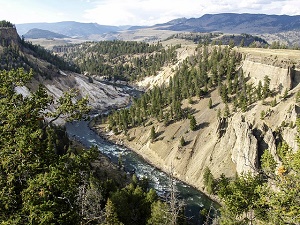 In the national parks missing person cases, if only one or two clusters existed, one could ascribe the vanishings to the work of a serial killer.

A search of missing person case in and around Yellowstone found a disproportionate number of teenage females (4). One does not have to be an FBI profiler to draw conclusions from that fact.

But 35 clusters, with some cases going back to the late 19th century, defy any conventional explanation. That leaves X-Files-style causes like alien abductions, Bigfoot, or interdimensional portals. The imagination can just run rampant.

The government may or may not know more than it is revealing. Of course, the NPS makes a lot of money on admission fees to national parks. If more people became aware that young people are vanishing without a trace at national parks, they might make other vacation plans.

In any case, the mystery cries out for a more extensive investigation than one author can undertake. Something happened to these missing people, and the reason needs to be uncovered.