How Giving the Homeless Homes Costs Less Than The Alternative

Jeri Simpson view more articles
Facebook 0 Twitter 0 Pinterest 0 Google 0 LinkedIn 0
Each year, hundreds of thousands of people find themselves in a situation with no home. According to the U.S. Department of Housing and Urban Development, around 578,000 people were homeless on any given night. Of this, nearly 138,000 were children under the age of 18 and roughly 50,000 were veterans (1).

These numbers don’t even account for the annual totals that are considered to be far higher than the point-in-time counts, with estimates that soar into the millions.

Fortunate individuals and families spend their nights in residential programs for the homeless, while others take to parks, abandoned buildings, natural disaster, and other attempts at shelter.

Those individuals without needed support often find themselves in difficult situations. Squatting on private property often results in jail time, accruing expenses for the jail and staff time, including arresting officers. The physically and mentally ill wind up in hospitals with no way to pay for their costly hospitalization expenses.


Cost of Caring for Homeless

Research conducted for three counties in Central Florida calculated the cost of caring for homeless individuals. The analysis found that long-term-homeless residents were costing taxpayers an annual average of $31,065 per person including jail and hospitalization expenses (2). These numbers didn’t even include the amount of money spent by nonprofit organizations that often provide food and shelter.

The daunting number wasn’t surprising for city officials. Instead, what surprised them was the cost of the alternative. Permanent supportive housing for each chronically homeless individual was estimated around $10,051, an impressive savings for taxpayers (2).

Florida’s findings were not alone. Sam Tsemberis, a psychologist who had worked closely with the mentally ill, which included a number of homeless people. His findings provided him with a better understanding of those inflicted with homelessness. This included their complex subculture.

His discoveries led to an organization he runs today, Pathways to Housing. Unlike other programs that worked on a rewards system that awarded housing after completing a task like kicking an addiction, Tsemberis’s model put housing first. Utilizing $500,000 in federal funding, he found that their success improved with stability (3).

Individuals were prioritized with most difficult cases getting top priority. They were provided with a home with no questions asked. They were then immediately provided with counseling. Throughout the process, the residents were given final say, including where they lived, how often they were counseled, and what they owned.

Even if an individual relapsed, their housing rights were not revoked. 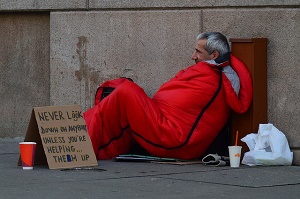 The results in Florida were stunning. They experienced a retention rate of nearly 85 percent. The “housing first” model spread throughout the country like wildfire. The federal government expanded the model to 11 cities.

Cities in Utah, Arizona, Louisiana, New York, California, Virginia, and the District of Columbia are among the cities with groundbreaking results. Cities across the nation are saving millions. Mayors and governors are reporting savings of $10,000 or more per person.

Even more importantly, the program is boasting an impressive 84 percent retention rate – much higher than any other program currently available (3). The success is so profound that many major cities are adopting the program.

After 20 years of success, Pathways to Housing has multiple locations (4). The success of their program is based on their approach. While housing is at the forefront of their goals, only 5 percent of their staff are dedicated to housing. The remaining 95 percent are interdisciplinary clinicians focused on treating the root cause of homelessness (5).

The Housing First model continues to succeed, helping people and taxpayers at the same time. As more cities adopt the model homelessness could maybe one day be nearly eradicated.