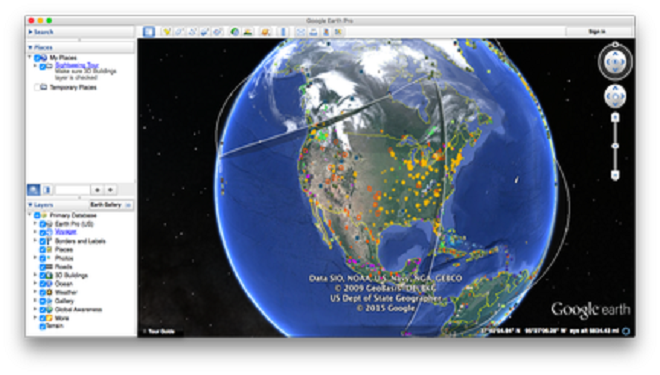 SallyPainter view more articles
Facebook 0 Twitter 0 Pinterest 0 Google 0 LinkedIn 0
Thanks to the “high-resolution imagery” of Google Earth, strange geometric shapes have been discovered in Central Asia. In October 2015, the New York Times reported that the geoglyphs were first discovered in 2007 by Dmitriy Dey, a Kazakh economist. Dey who was exploring by using Google Earth when he came across the earthworks located in Turgai, Kazakhstan (Central Asia) (1).

Originally, Dey found 50+ geoglyphs that consisted of a variety of five major shapes ranging from squares, lines, crosses and rings. Among those geoglyphs were some that formed the ancient swastika symbol used long before the Nazis hijacked the design.

The glyphs vary in sizes. Some are 295 feet in diameter and others have diameters as large as 1,312 feet. Incredibly, a few of the glyphs are longer than a “modern-day aircraft carrier”. Like the Nazca Lines, these earthen mounds were completely undetected until viewed from the air; only then were they discernible.

Since being discovered, researchers from Kostanay University and Vilinus University have been studying the ancient symbols by using “ground-penetrating radar surveys, aerial photography and dating” as well as conducting “archaeological excavations”.

Since Dey first discovered the geoglyphs, his team of researchers believe they’ve found more than 260 glyphs. This total includes trenches and ramparts as well as mounds forming various geometrical shapes. However, other scientists disagree and believe the number is more like the original total of 50+ sites.

While a large portion of the geoglyphs were constructed from earthen mounds, quite a few, such as the massive swastika, were made out of timber. Scientists have dated the glyphs as being around 2,000 years old, with the oldest estimated to be 8,000 years old.

Dey’s team studied the “rate of erosion of the mounds, along with finds of Neolithic flints around the sites” and placed the age as old as 8,000 years. Dey also believes that the geoglyphs were used as solar observatories being created during the “Neolithic sun cult”.

As with the number of geoglyphs, not everyone agrees on the range of antiquity; they believe the oldest is 2,000 years. National Geographic quotes Lithuanian Institute of History in Vilnius archeologist, Giedre Motuzaite Matuzeviciute, as stating her team, “used modern dating methods that pinpoint construction of one earthwork to 800 B.C. and another to 750 B.C.” (2)

According to Live Science, one of the sites, an enormous configuration of earthworks, has been photographed from space and named Ushtogaysky Square in honor of the closest village (3).

The New York Times reveals that this largest site is located by a Neolithic settlement and that the square consists of “101 raised mounds”. A diagonal cross connects the opposite corners. To understand the mass of this site a comparison was drawn that the amount of terrain covered by these mounds is greater than that of the Great Pyramid of Cheops. A geoglyph is a “large design or motif (generally longer than 4 metres)” and is created on the ground. Geoglyphs are made from clastic rocks or other landscape materials, such as live trees, gravel, pieces of stones, whole stones or earth (4).

Just like the Peruvian Nazca Lines no one knows who created these geoglyphs or what their purpose was. The Kazakhstan have revealed a few clues in the archeological excavations. These include hearths and various structures. The excavations suggest “rituals took place there,” according to Andrew Logvin and Irina Shevnina, two of the archaeologists involved with uncovering the purpose of these mysterious mounds.

One speculation is that ancient peoples may have used the geoglyphs as land markers to indicate ownership. Some suggest the structures were used as animal corrals while others hypothesize some of the geoglyphs were perhaps stone circles similar to Stonehenge (5).

Live Science quotes Shevnina and Logvin saying, “As of today, we can say only one thing — the geoglyphs were built by ancient people. By whom and for what purpose, remains a mystery.”