Is Corporate Media Trying to Stifle a US Militia Uprising in Oregon?

GabriellePickard view more articles
Facebook 0 Twitter 0 Pinterest 0 Google 0 LinkedIn 0
The story of the US militia uprising in Oregon is an interesting one. Early January saw an armed group gather in a nature reserve in Oregon, claiming to be defending two local cattle ranchers from being sentenced to prison for arson.

The group, which has seized control of a nature reserve in Oregon, which is federally owned, is led by the Bundy family, who is originally from Nevada. The Bundy’s claim to be defending father and son duo Dwight and Steven Hammond, who are due to be resentenced to prison after an Oregon judge increased their convictions for arson.

The Hammonds were convicted of setting 100 acres of federally-owned land on fire between 2001 and 2006. Dwight was originally sentenced to three months and Steven to a year. However, an Oregon judge is now reviewing the case and whether it wasn’t tough enough.

The Hammonds claim they had set the land on fire in order to protect their property from wildfires by reducing the number of invasive plants growing on the land, which the family had loaned from the government.

In a report about the Oregon case, the Conservative Tree House describes the ‘full story’ as to why approximately 150 – and growing – armed militia has decided to take control of the Milheur Wildlife Refuge Headquarters and wildlife reserve and are prepared to stay there indefinitely (1).

The ‘full story’ starts in the 1870s when the Harney Basin, where the Hammond family’s ranch is established, was settled by multiple ranchers, who developed state-of-the-art water irrigation systems and the land soon became a popular stopping spot for migrating birds.

The report notes how the Hammond family purchased their ranch in the Harney Basin in 1964, which included around 6000 acres of private property. The article speaks of how by the 1970s, nearly all of the ranches in the adjacent valley were bought by the US Fish and Wildlife Services (FWS).

By 1980, conflict over the land was well underway as, according to the Conservative Tree House, the FWS wanted to acquire the ranch lands of the adjacent Silvies Plain to “add to their already vast holdings.” Despite being approached by the FWS several times, the Hammonds refused to sell.

The article goes on to talk about how the FWS and the Bureau of Land Management (BLM) began to illegally build fences around the Hammonds’ water source and restrict access to upper pieces of the Hammond’s private property.

In 2001, Steven Hammond informed the fire department that he was going to carry out a prescribed burn on their ranch, a traditional method that has been carried out by ranchers and Native Americans for years to improve the productivity and health of the land. The fire, however, went on to burn 127 acres of public grassland.

According to the report, in 2006, a huge lightning storm initiated fires in the countryside near the Hammonds’ home. Steven Hammond deliberately started a backfire on their private property as a means of protecting their property and putting the fire out.

“The backfire worked perfectly, it put out the fire, saved the ranch and possibly our home,” said Susan Hammond, Steven’s mother.

The following day, federal agents filed a report, accusing the Hammonds of starting a backfire. After a review of the case, the Harney County District Attorney decided not to warrant arrest and dropped the charges.

However, five years later in 2011, the US Attorneys Office accused Dwight and Steven of significantly different offenses – being “terrorists” under the Anti-Terrorism Act. In 2006, the Hammonds’ home was raided by federal agents in an attempt to find incriminating evidence that they started the fires.

In June 2012, Dwight and Steven Hammond were found guilty of starting two fires, one in 2001 and another in 2006. The court convicted them under the 1996 Anti-Terrorism Act and gave them 3 months and 12 months in prison. After fulfilling their sentences, in October 2015, the district court “re-sentenced” the Hammonds, forcing them to return to prison for several more years. They were ordered to report to prison again on January 4, 2016 to begin their re-sentencing.

The re-sentencing demand triggered the protests, which led to the occupying of the land, led by Ammon Bundy, son of Clive Bundy, a controversial anti-government rancher. 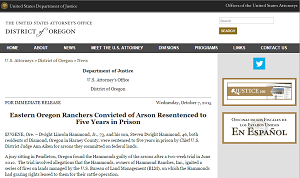 As well as being an intriguing and shocking story, what is also interesting is how the story has been picked up by the media. While the alternative media such as the Conservative Tree House are committed to telling the
full story” and giving the full background of the case, other more mainstream news sites seem to be more inclined to focus the report on the “armed militia”, intent on “overthrowing the US government and sparking national uprising”, which was the title for the story in The Independent, a mainstream British newspaper (2).

The Independent’s predominant focus is the words of the sheriff, who told the Oregon local news channel KTVZ that the men involved in the protest have alternative motives to “attempt to overthrow the country and federal government in hope to spark a movement across the United States.”

Incidentally, the Independent report makes no mention of Dwight and Steven Hammond being accused of being
terrorists and sentenced under the Anti-Terrorism Act 1996.

In the BBC’s report of the case, it talks of how the incident has “riled right-wing activists who resent government interference” (3). Similar to the Independent report, the BBC concentrates a lot on the activists, particularly the Bundy family who has “seized the complex and plan to stay there for years.”

It is also interesting that the story seems to have gone unreported in much of the mainstream press. As Top Secret Writers wrote in August 2015, corporations and the media work hand in hand (4). Could it be that the corporate media aren’t wanting to publish much about the story because their interests lie with the organizations wanting to own the land instead of the Hammond family?

We’d love to hear our readers’ views on this interesting case.