NYC Police Provide a Glimpse of Martial Law During Blizzard 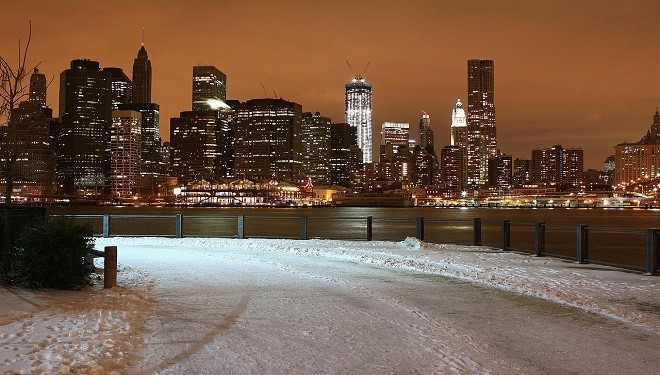 SallyPainter view more articles
Facebook 0 Twitter 0 Pinterest 0 Google 0 LinkedIn 0
The January 2016 blizzard that hit New York City could paint a picture of how anyone could quickly become a prisoner in their own home during a serious martial law incident. Simply examining how the blizzard sent New York City into a state of emergency can reveal such a scenario for martial law and how it might unfold during a similar or other type of emergency event.

It certainly wasn’t the first time that NYC went on lockdown for a blizzard, but it was the first time such a glimpse into a possible martial law future unfolded via Twitter. It’s a dramatic unfolding of events as the tweets began as informational ones with various harsh weather tips.

The measures that the NYPD took to ensure public safety worked and were very effective in saving lives. Those measures included a ban on people driving vehicles in the city and eventually there was a travel ban, save emergency crews and city workers dealing with the nearly two feet of snow dumped on the city (1).

Even with this lock-down, there were still people who ignored the emergency measures, putting not just themselves at risk but police, rescue workers and other city employees tasked with keeping the city going during the blizzard.


Conditions before Travel Ban Was Enacted

Before the travel ban was announced, the NYPD NEWS tweets revealed the building urgency that police and rescue workers were facing.

The Tweets on January 22, 2016 were simple pleas for people to stay off the roads. Other tweets informed the public various details, such as any vehicles blocking roads would be towed followed by a reveal that it wasn’t an idle threat; the city had nearly 100 tow trucks ready to do the job.

Some of those January 22 tweets included:

–> “Unless urgent please stay off NYC roads during the storm NYPD NEWS ‏@NYPDnews”
–> The informational tweets were about storm safety tips, who to call for heat or hot water issues and homeless shelter outreach efforts.

Sometime later these were followed with a tweet update on the road conditions:

–> “YPDChiefofDept: we have towed 80 vehicles. 200 accidents and there are 120 tow trucks are the road to clear vehicles. We are considering a full travel ban. People need to get off the road, Mayor says. @NYCMayorsOffice @BilldeBlasio.”

Despite the pleas for people to be smart and stay off the streets, many refused to heed the warnings. The tweets were painting a very clear picture that emergency tactics would need to be enacted to ensure public safety and the safety of the city workers.

On January 23, the NYPD NEWS tweeted:

There was a more pointed warning:

–> “Don’t be like this guy: get off the road & adhere to the travel ban. We don’t want to have to pull you out!” (Accompanied by two photos of tow truck and vehicle stuck in snow.)

This tweet was followed by the announcement that the roads were being closed:

–> “Hwy enforcing citywide road shutdown!”
–> “For your safety & ours, roads are closed in NYC except for emergency vehicles.” #Blizzard2016

Then, the travel was stopped. Please was no longer being used in the tweets. In fact, the tweets became more directional:

–> “The travel ban that begins at 2:30pm is for your safety. Protect yourself & protect others by staying off the road.”
–> “After 2:30 p.m and you’re on the road, we will arrest you @NYPDChiefofDept says.”
–> “Winter weather: All non-emergency vehicles throughout NYC must be off the roads by 2:30PM & until further notice #alert”
–> “It’s 2:30pm. Stay inside, stay off the streets. Let NYC emergency workers do their job. Roads are closed in NYC for everyone’s safety.”

The tone of the warnings changed with the travel ban, letting people know this was a very serious storm and situation:
• “Stay off the road, @NYPDChiefofDept says. We don’t want to have to arrest you.”

This tweet was followed with one that seemed to appeal to the public’s common sense along with a reminder about the previous year:

–> “Last year no one got arrested. People made the right decisions. We are looking for that again today,” @NYPDChiefofDept says re: travel ban

The warnings grew sterner as the storm progressed:

–> “NYPDChiefofDept says emphatically: get off the road. Let us do our job. Stay off the streets.”
–> “@NYPDChiefofDept: more than 300 tows and 200 accidents.”
–> “Remember there is a travel ban – STAY OFF NYC ROADS Commissioner Bratton ‏@CommissBratton”
–> “NYPD cops, always there to help. We need all to stay off the roads – that’s how you can help everyone stay safe.”

The tweets continued throughout the storm, informing citizens that an additional 30 EMS ambulances were “on the street” in their efforts to “keep everyone #SafeNYC”

Travel Bans Due to Blizzards

The travel ban was lifted on January 24 at 7 a.m. Some tweets gave a rundown of what had transpired and the services that had been given to the public:

–> NYPD reported that “130 homeless individuals were voluntarily taken to shelters to keep warm during the #blizzard2016.”
–> Chief Joseph Fox ‏@NYPDTransit Jan 24 tweeted: “Excellent work by all during the snow- Helping riders navigate delays, outreach to the homeless & station inspections.”

The travel ban was a success and help keep people out of the storm’s deadly path.

Travel bans aren’t new but are rare. In February 1978, NYC shut down schools. To this day, closing NYC schools is very rare thanks to the subway system that usually keeps on running. But in 1978, people were caught out in the storm. Some were stranded in vehicles, offices and in their homes (2).

It was nearly impossible for some to get out of buildings with the exits reportedly blocked with 15 feet of snow. Eventually, the National Guard was called in to help clear the roads.

NYC wasn’t the only city to grind to a halt during the 1978 blizzard. National Guard troops were flown to Boston to assist in digging the city out of the snowbanks.

Getting people to hospitals to treat illnesses or for snow related injuries was problematic. Many were transported by snowmobiles. People who were able to get out and needed to travel did so with sleds and/or cross-country skis.

The northern part of the Eastern Seaboard was in a declared state of emergency by the affected states’ governors. It took six days of effort to finally clear the roads for passage. At times, this involved digging cars and trucks out from underneath sometimes 30 feet of snow.

In Connecticut, the state shut down for three days and had a ban on travel with emergency travel being the only exception. Massachusetts was also shut down. The National Guard transformed the parking lot at Fenway Park as the staging operation for the recovery efforts.

The next notable shutdown was the blizzard of 2013 (3). In Massachusetts, the state government called a travel ban before the worst part of the blizzard hit the state.

Having ample food, water, an alternative heat source and other necessities are things that can be planned and stocked up in advance, especially when the forewarning of a storm or event has been issued.

It doesn’t require much imagination to see a different scenario of a state of emergency that is accompanied by martial law. Unlike blizzards, a worst case scenario of martial law could be an endless action. You could literally become a prisoner in your own home and your stored resources could quickly be depleted.

How would you and your family fare if martial law were declared one minute from now?