Mark Whittington view more articles
Facebook 0 Twitter 0 Pinterest 0 Google 0 LinkedIn 0
Barney and Betty Hill (1) are two of the most famous alleged UFO abductees (2) in the history of the phenomenon. The story of the Hills begins on September 19, 1961, when they were driving through rural New Hampshire. At about 10:30 in the evening, they spotted what appeared to be a bright light in the sky.

The sighting led to a lurid story of an encounter with what seemed to be an alien spacecraft that took them on board to perform medical experiments before letting them go. Their story became a best-selling book in 1966 and a TV movie in 1975 and was an episode in the 1996 TV series “Dark Skies.”

Interestingly, the details of the story seemed to grow over time. According to a series of audio recordings (3), Barney Hill’s account changed and expanded after a series of hypnosis sessions.

In the first version, recorded on the first recording in the archive, Hill described how they spotted the light in the sky, at first thinking it was a star, and then a satellite, then a low-flying airplane. He remembers himself and his wife being chased into a field where they watched the light through binoculars.

The craft, as Hill described it, came close enough that he could see humanoid beings watching him and his wife through a window. Then, the Hills left the field in great haste and drove for 35 miles before beginning to talk about the incident. Mr. Hill remembers expressing the fear that they would be captured. Betty Hill later reported the incident to a local Air Force base once they arrived at their home in Portsmouth. The report was forwarded to Project Blue Book, and the couple was later interviewed by NIPAC.

Betty Hill began to have vivid dreams of herself and her husband having been taken aboard the alien craft and being given a medical examination before being led back to their car.

The dreams and the fact that they could recall little or nothing of the 35-mile drive led them to seek the help of Benjamin Simon, a Boston hypnotherapist.

Barney Hill’s account of the UFO encounter expanded greatly under hypnosis, as related in recordings six and seven on the archive site. The account does not include the Hills’ claims of being taken aboard the alien ship and having a medical exam conducted on them as well as them interacting with the crew of the vessel.

UFO enthusiasts believe that the hypnotism sessions unlocked what is commonly referred to as “missing time” common in UFO abduction cases in which abductees lose their memories about what happened when they were on board the alien spacecraft. 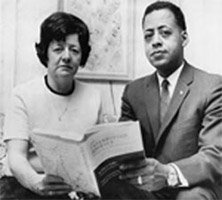 However, even at the time of the hypnotism sessions, some expressed skepticism as to whether the missing time memories were real. Subsequently, research (4) has proven that false memories can be implanted, perhaps by accident, by a therapist who is too suggestive in his or her questions. People will “remember” things happening that in fact never happened as a result of these therapy sessions.

The instances of implanted memories came out during the 1980s and 1990s in which adults, sometimes undergoing therapy for other mental health issues, were made to ”remember” sexual abuse when they were children that in fact had never taken place. A number of people were sent to jail, having been falsely convicted of child sexual abuse, and had their careers, marriages, and lives ruined.

Did Barney and Betty Hill encounter an alien spacecraft on a New Hampshire country road in 1961 and were they taken on board to have medical experiments performed on them? The evidence is based primarily on their say so, with the story of “missing time” to buttress the account. But with the alternate explanation of an implanted memory, no firm evidence exists to prove or disprove the account, either way.