The Ghost of Forrest Ackerman – Real or Fraud? 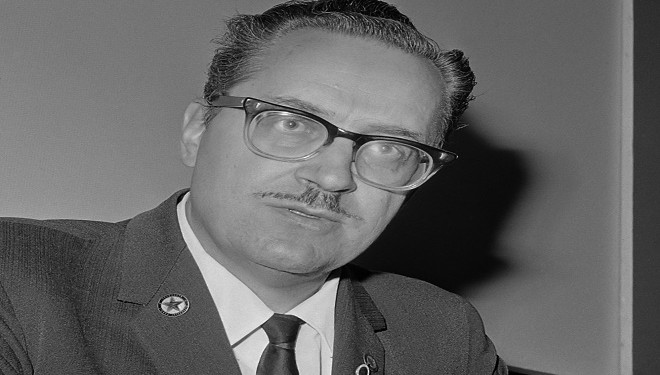 GabriellePickard view more articles
Facebook 0 Twitter 0 Pinterest 0 Google 0 LinkedIn 0
The late Forrest Ackerman, a science-fiction magazine editor and writer from California, was somewhat of a legend in the world of sci-fi. Being the founder of the sci-fi fandom ‘Famous Monsters of Filmland’, founded in 1958, Ackerman helped excite throngs of adolescent boys into becoming a generation of movie monster fanatics.

Despite his talent for creating highly inventive and extraordinary fictitious supernatural creatures, interestingly Ackerman was a staunch skeptic of the supernatural world.

The science-fiction author legend died in 2008, at the age of 92. Soon after his death, a string of strange supernatural occurrences involving the late author surfaced.

Could it be that the iconic figure of the sci-fi community is speaking from the other side?

Many of the strange “ghost of Forrest Ackerman” events have been documented by the author’s lifelong friend Paul Davids, who has since pooled the occurrences into a documentary. As Watkins Magazine notes, the documentary, titled The Life After Death Project, is being hailed as a “milestone in paranormal studies” (1).

So what is the content of the documentary and “evidence” that the so-called coiner of the term “sci-fi” is communicating from the “other side”?

One of the first reports that the late Forrest Ackernman was trying to communicate with his friends was made by filmmaker Paul Davids. According to Davids, shortly after his friend’s death a mysterious ink blot appeared on a piece of paper at his home.

As the Huffington Post reports, according to Davids, a piece of paper, which contained a list of business meetings mysteriously managed to develop a blot of ink which covered up the words “Spoke to Joe Amodei” (2).

Speaking to the Huffington Post, Davids spoke of his perplexity surrounding the strange blot of ink.

I had no idea why these particular words were blacked out. It made no sense to me until later, when I was researching Forry’s editorial style and I found lots of examples of where he blacked out words so completely. I found 15 examples of where Forry found a name within a name or a word within a word as being a hidden word to make a pun or a point out of it,” said the filmmaker (2).

This was the first incident of a string of events that Paul Davids claims to be unexplained instances where Ackerman has been attempting to communicate with him.

Other paranormal events connected to the late sci-fi writer and which are explored on the life After Death Project documentary include the words “Ackerman 000” appearing on a computer screen, which, according to Watkins Magazine, manipulated anti-spam software.

One of the scientists involved in trying to explain the phenomena on the documentary, says that documents were scattered across the floor at his home as he was being filmed, causing an unwound clock to start chiming.

Another creepy incident recorded on the documentary is of a wooden African mask at Paul Davids’ home, which the filmmaker claims is now haunted by Ackerman. The mask, according to Davids, now registers off the scale in electromagnetic frequencies.

One particularly interesting occurrence involves an article about Ackerman’s death in a magazine. Despite having been proofread by four members of staff, the article was published with the inkblots now associated with Forrest Ackerman inscribed twice on the article.

Further paranormal activity includes Ackerman allegedly haunting the house in which he used to live by producing a shadowy figure and “scattering musical scores around the room.”

Davids believes these unexplained incidents are proof that his lifelong friend is trying to communicate with the world that life continues after death.

It is certainly a compelling story that makes us ponder about life after death and whether we do go to the other side. However, skeptics might believe that the stories of the ghost of Forrest Ackerman might just be people “cashing in” on tales of the paranormal (3). Is lifelong friend of Ackerman, Paul Davids, truly experiencing paranormal events or is the string of alleged ghost encounters only to rouse interest, money, and fame?