Utsuro-Bune: The Strange Japanese UFO From 1803 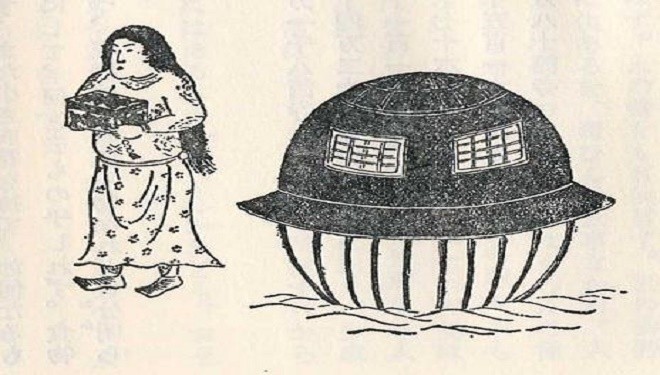 GabriellePickard view more articles
Facebook 0 Twitter 0 Pinterest 0 Google 0 LinkedIn 0
The story of Utsuro-Bune is a strange one, which dates back to Japan in the early nineteenth century. The story can be found in the Iwase Bunko Depository library in a document titled ‘Hyouryuukishuu’, which translates as ‘Diary and Tales of Castaways’. The stories depict Japanese sailors in foreign lands and castaways from different countries landing on the beaches of Japan.

One of the stories of the ‘Hyouryuukishuu’ is of Utsuro-Bune, a strange-looking ship, which would appear from the depths of the Pacific Ocean and make its way to Harashagahama in Hitachi-no-kuni, which is now the Ibaraki Prefecture, a region of Japan. Aboard the ship was a young woman, approximately 18 – 20 years old, who was elegantly dressed and had red eyebrows, red hair and a pale face.

The ship, which was 3.3 meters high and 5.4 meters wide, sailed the Pacific Ocean in 1803. It was made of iron and a red sandalwood-like material and had crystal or glass windows.

According to the story which is described on FanWave (1), the young woman spoke in a metallic tone and in an unknown language. In her arms she clutched a wooden box, which appeared to be of great value to her and that she did not want anyone to take from her.


Past Tales of UFOs

In the inscriptions replicated of the ship in the document, its shape resembles that of flying saucers and UFOs, saucer-like and round.

Dr. Kazuo Tanaka of Gifu University in Tokyo, believes both the young woman and the Utsuro-Bune ship could be of extra-terrestrial origin.

FanWave poses the question that it could be because of the Utsuro-Bune story why cartoonists from Japan have a tendency to use extra-terrestrial-inspired young women as primary characters in TV series.

The Living Moon also talks about the History of Utsuro Bune from 1803 and the ‘Tales of Castaways’ (2). Living Moon informs how UFO enthusiasts may relate the Utsuro-Bune story to a danger zone area off the Southern coast of Japan, known as the ‘Dragon’s Triangle’, sister of the Bermuda Triangle.

According to Living Moon, there are some people who believe both the Dragon’s and Bermuda Triangle are actually underwater bases set up by aliens. Ships travel through these zones at their peril and for many, such the Utsuro-Bune ship, they don’t make it through.

“These are described in the UFO community as some of the earliest known drawings of UFOs.”

Educating Humanity goes on to explain how two books focusing on the Utsuro Bune incident were published. Toen Shousetsu was published in 1825 and Ume no Chiri in 1844 and both predate what’s considered as ‘modern’ UFO sightings.

In 2015, Top Secret Writers wrote about four unusual UFO sightings reported on Reddit since November (4). As always, it is important to study all the facts and then make an educated guess about what the objects might have been.

Though a sighting of a mysterious ship off Japan’s coast in 1803, that resembled the shape and size of how we recognize UFOs today way before the symbolic ‘flying saucer’ image was etched onto cultural consciousness, remains one of the strangest UFO stories in existence. What do you think? Is it possible the Japanese were visited by someone from another world? Or, is there a different explanation?