How and Why We Should Colonize the Moon

SallyPainter view more articles
Facebook 0 Twitter 0 Pinterest 0 Google 0 LinkedIn 0
Colonizing the moon isn’t a new idea. In fact, during the Apollo missions, many Americans felt that a moon base was well within reach, but the idea was abandoned along with the moon missions.

Prior to the Apollo mission, the moon base idea was seriously explored. In 1958, the US Air Force undertook the Lunex Project, a moon landing plan that included a 28-man moon colonization underground base.

In June 1959, Project Horizon was created and organized by the US Army’s Ballistic Missile Agency (ABMA) “to assess the feasibility of constructing a military base on the Moon” (1). This was followed-up with the first successful US spacecraft landing on the moon (Luna 2) in September 1959. Between 1968 and 1972, the Apollo program saw six manned missions successfully land on the moon’s surface, but no base built (2).

Nearly 60 years later, technology is taking these ideas into the realm of feasibility and once more luring scientists to contemplate a moon base. Couple these aspects with the threat of climate change to the continuance of human life and it’s no wonder that space stations, space explorations and other ideas, especially a lunar base are once more topics of serious discussions. All of this occurred prior to the discovery of ice water in one of the moon’s polar craters.

However, the plan to establish a lunar base was quickly overshadowed by the Mars landings and the desire for deep space exploration. The Obama Administration nixed the revived interest in a lunar base and the various new plans submitted. Instead, Obama opted to proceed with plans to establish a Mars base.


Cost of Establishing a Moon Base

In March 2016, Market Watch published an article by Jurica Dujmovic stating that the moon could be colonized by 2022 for $10 billion. The article further states that even $35 billion would be “downright cheap” (3).

While the $10 billion figure is the mean for an estimate ranging from $7 to $13 billion, it isn’t the total cost. Add to this price tag the actual construction cost of a moon base estimated to be somewhere between $28 and $52 billion. Compared to past estimates of $100 billion or more, this is an arguably less cost and within the scope of a possible undertaking.

To put the cost into a comparative context, MW states that a single US aircraft carrier comes with a $13 billion price tag.

The political aspects of establishing a base on the moon are complex. Scientists are divided with plans in hand for establishing a moon base with others pushing for a Mars base. Many people believe that both bases aren’t currently affordable and sustainable, still others argue it’s feasible to build both bases.

With the Obama Administration green lighting the Mars base option, the time frame for an off-world base is more than twice what it would be for a moon base. Instead of having an off-world base in six years (moon base projection), the Mars plan establishes the first off-world base farther away from Earth and will take nearly 13 years (4).

Dujmovic argues that a moon base is the best place to start since it would give “the real-world experience that may prove invaluable for future projects on other planets like Mars.”

The most obvious argument for choosing the Moon over Mars for the first off-world base location is its proximity to Earth.

Space.com explains that it took three days for the Apollo missions to reach the moon. However, the New Horizons probe made it in 8 hours and 35 minutes as it zoomed past the Moon on its way to Pluto (5).

Mars is substantially farther away from the Earth. With both Earth and Mars constantly moving, planet alignment is a key factor dictating the time of launch. It could take 6-10 months for a space ship to reach Mars, depending on planet alignments, size and weight of spacecraft and type of fuel.

For example, the Curiosity Rover took 10 months to reach Mars and land (6). According to Cornell University, the launch window for missions to Mars is approximately every 26 months (7). It takes that long for the Earth and Mars to reach alignment with each other to allow for an optimum trajectory between the two planets.

Pluses for Moon base include:

–> Moon used as stepping stone or doorway to universe.
–> Lunar lava tubes may be big enough to support base
–> Ice at lunar poles provide water source
–> Mining the treasure trove of rare metals and other materials for Earth use
–> Provide training ground for human expansion into solar system and deep space
–> Scientific projects cheaper and more expansive 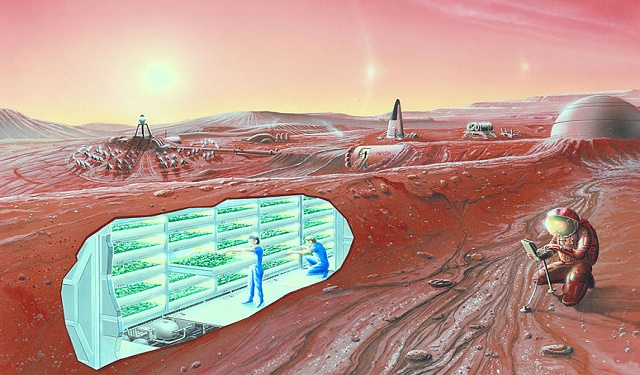 For example, in 2007, Google launched its Lunar XPRIZE ($30 million) to “incentivize space entrepreneurs” with the goal of designing “affordable access to the Moon and beyond” (8).

Privately funded teams competed and in December 2015 the XPRIZE was awarded to Moon Express, Inc (9).

Shackleton Energy plans to use the ice packs on the Moon to convert into rocket fuel to create fuel stations in the Earth’s orbit. This would be accomplished by splitting the water into oxygen and hydrogen (10).

In addition, there are many possibilities for space industry, such as clearing space junk, servicing satellites, launching missions and even creating orbital stations for hotels and research labs, generating solar energy and beaming it back to Earth, mining asteroids and various types of manufacturing. And the list goes on.

Even if the US government continues to bypass the possibility of a moon base, the growing private space industry seems poised to take advantage of the opportunity. A privately-owned Moon base or even several such bases may be showing up in amateur telescopes in the near future.