SallyPainter view more articles
Facebook 0 Twitter 0 Pinterest 0 Google 0 LinkedIn 0
A new study shows that sucralose, the main ingredient found in Splenda, is linked to leukemia. Sucralose sold under the brand of Splenda® is FDA approved to be used in food as a “non-nutritive sweetener”. Sucralose is “about 600 times sweeter than sugar” (1).

In January 2016, the Italian researchers published their study findings online in the “International Journal of Occupational and Environmental Health”.

The researchers stated that the purpose of their study was “to evaluate the carcinogenic effect of sucralose in mice, using a sensitive experimental design.” The team studied groups of Swiss mice treated “from 12 days of gestation through the lifespan with sucralose in their feed” in concentrations of 0, 500, 2,000, 8,000, and 16,000 ppm (parts-per-million). The study included five groups of male mice and five groups of female mice.

The scientists wrote, “We found a significant dose-related increased incidence of males bearing malignant tumors (p < 0.05) and a significant dose-related increased incidence (p < 0.01) of hematopoietic neoplasias in males, in particular at the dose levels of 2,000 ppm (p < 0.01) and 16,000 ppm (p < 0.01).” (2)The researchers point out that these findings of “carcinogenic effects” weren’t found in the studies Splenda conducted. The chasm between the Italian study and others conducted for Splenda have significantly opposite results. The Italian study shows that sucralose is not harmless as the previous studies indicated.The Italian team wrote that “Long-term carcinogenicity bioassays on rats and mice conducted on behalf of the manufacturer have failed to show the evidence of carcinogenic effects.”The Italian study sparked controversy over its validity. The Italian researchers also stated that more studies were needed to demonstrate that sucralose is safe. The paper states that in addition to their research, there’s a need for, “new and more adequate carcinogenic bioassay on rats. Considering that millions of people are likely exposed, follow-up studies are urgent.”

Sucralose was approved in 1998 by the FDA for “15 food categories”. In 1999, the FDA expanded the approved use to “general purpose sweetener for foods”. Splenda is used as a sugar substitute for many baked goods as well as “beverages, chewing gum, gelatins, and frozen dairy desserts”.

The FDA states that, “Sucralose has been extensively studied and more than 110 safety studies were reviewed by FDA” during the approval process for its use in foods (3).

In March 2016, Fox News Chicago reported that the FDA “acceptable daily intake” for sucralose “in children at 5 mg/kg”. The same news report states that the CSPI [Center for Science in the Public Interest] report states that “a 6-year-old child weighing 45 pounds would exceed that limit by drinking two or three 12-ounce sodas containing the typical 40-60 mg of sucralose per can” (5).

In June 2013, the Center for Science in the Public Interest (CSP) downgraded Splenda from “Safe” to “Caution” pending evaluation of the “respected Ramazzini Institute, an independent laboratory based in Italy” study (6). 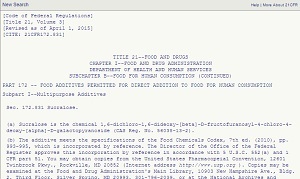 In February 2016, the CSPI further downgraded Splenda from “Caution” to “Avoid”. The watchdog group CSPI cited the Italian study that not only revealed the sucralose product caused leukemia, but also “related blood cancers in male mice” (7).

CSPI states that “The only other long-term feeding studies conducted on sucralose were conducted by the manufacturer and did not find a problem.”

Perhaps one of the more interesting aspects of why CSPI downgraded Splenda to its lowest rating is found in the CSPI conclusion.

CSPI states that “…the new study [Ramazzini Institute] is more powerful than the industry-funded studies, which tested fewer animals, started exposing the animals beginning at adolescence as opposed to in utero, and ended earlier in the animals’ lives.

Other artificial sweeteners on CSPI’s “avoid” list include “saccharin, aspartame (8), and acesulfame potassium.”

Along with the Ramazzini Institute, CSPI believes further studies are needed “…before we can be confident that the sweetener is safe for use in food.”

The food industry and Splenda discount the new findings, citing the FDA approval and studies used for that approval process. Until other independent studies are undertaken, the Italian study stands alone in its findings.