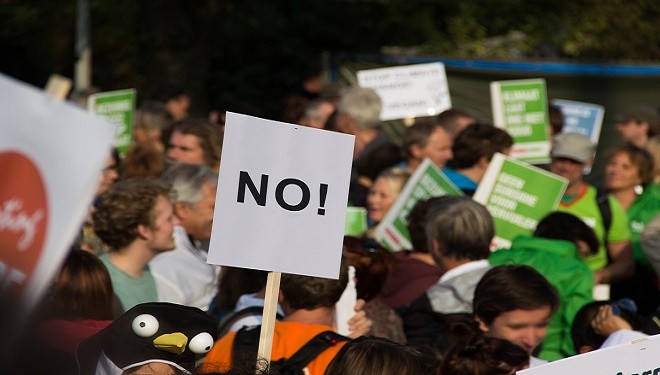 Mark Whittington view more articles
Facebook 0 Twitter 0 Pinterest 0 Google 0 LinkedIn 0
Harry Dent, writing in Business Insider (1), is anxious about the future of the United States. He believes that every possibility exists for civil unrest to arise out of more than a decade of frustration with economic failure and a government that seems to be unresponsive to the desires of the people it governs.

Protest movements have already made themselves known during the current Obama administration, from the peaceful, middle-class Tea Party movement to the somewhat chaotic and occasionally violent Occupy Wall Street. But civil unrest on a scale that it might threaten the social order has yet to occur.

The term can have a variety of meanings. The United States has always had some degree of violent, civil unrest. The country was born in an outbreak of the phenomenon when men took their muskets down from over the fireplace, kissed their wives and children goodbye, and marched forth to do battle with the mightiest empire of the age.

But, with certain exceptions, the American system has been able to keep outbreaks of civil unrest in check, eventually addressing the causes of those flare-ups while making sure things didn’t spiral out of control.

Dent is worried enough that he has bought property in the Caribbean as a bolt-hole, which means that he is considering the possibility of a breakdown in civil society (2). That kind of collapse is unlikely, but that doesn’t mean that we’re not in for some public violence on the scale of, say, 1968. Some evidence exists that we’re already there.

Race riots, similar to what occurred in the 1960s, have already occurred in places like Ferguson and Baltimore. A terrorist attack in the town of San Bernardino took over a dozen lives and had the rest of the country on edge. Political events during the 2016 presidential campaign have been disrupted by groups of hecklers, with one disturbed person having to be taken down before he got to candidate Donald Trump.

On the other hand, we have been spared high-profile political assassinations, at least thus far. The unrest on college campuses has taken a bizarre turn with students, such as those at Emory University, having the vapors because someone wrote slogans touting Donald Trump on sidewalks and steps at the campus.

The quality of students has changed since anti-Vietnam War protesters faced down lines of police with riot batons and even National Guardsmen with bayonetted rifles.

The flashpoint for 2016 will likely be the two party conventions. 1968 saw pitched battles between the police and protestors at the Democratic National Convention in Chicago. With the toxic brew of resentments coming from such groups as Black Lives Matter, Moveon.org, the Donald Trump movement, and others, every potential exists for violent protests when the two parties meet in the summer of 2016.

Whether the unrest peters out or whether things get worse depends on the outcome of the election. Barring last-minute developments, the United States is faced with four different candidates, two Democrats and two Republicans, with vastly different solutions to what ails the country.

Bernie Sanders (3), who styles himself a “Democratic socialist,” advocates a vast increase in the size of government with new services ranging from free college to free healthcare to be paid for by across-the-board tax increases.

Hillary Clinton (4) seems to have eschewed the middle way approach of her husband to push for a continuation of the status quo, but with adjustments and fixes to make the current approach work better.

Donald Trump (5) offers his followers a chance to get even with groups many people believe have harmed the United States, including the Washington elites, the Chinese, the Mexicans, and the Muslims. His approach is more personality than policy driven. Elect Trump, and Trump will take care of things.

Ted Cruz (6) would like to recreate the program of President Ronald Reagan for the 21st century, lowering and simplifying taxes, reforming entitlements, cutting spending, and building up the military. He would hammer ISIS and other enemies abroad without getting into quagmires.

Editorial note: After this article was turned in and after the Indiana primary, Cruz announced that he is suspending his campaign. Shortly after, Kasich dropped out as well. That means that the presumptive Republican nominee is now Donald Trump.

If the new president’s program works, and economic growth starts an increase in employment and wage growth, he or she will have forestalled the process of civil unrest becoming worse. But if the current economic malaise continues, along with chaos and mayhem overseas, then so will the public disorder. If the American people do not see their grievances solved by peaceful means, they may decide to take sterner measures.