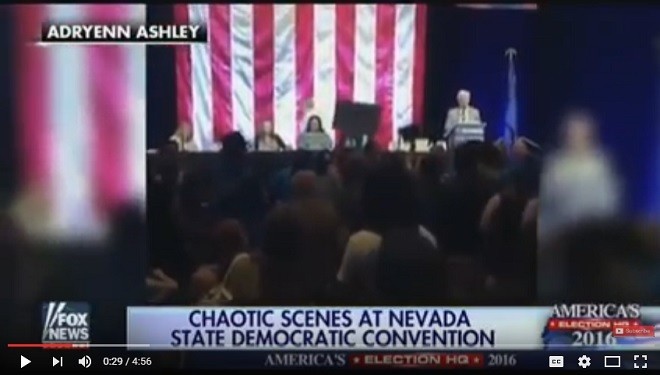 Mark Whittington view more articles
Facebook 0 Twitter 0 Pinterest 0 Google 0 LinkedIn 0
Donald Trump has seized control of the Republican Party in what must be the mother of all hostile takeovers, but the media is ignoring an even more significant rift taking place between supporters of Bernie Sanders and the Hillary Clinton for President Campaign.

The Sanders supporters believed that the proceedings had been rigged and made their objections heard vociferously. A YouTube video (3) captures the spirit of the moment. Eventually, law enforcement officers had to be called to restore order.

The main issue appears to be the denial of 58 Sanders delegates to the state convention of official status. The reason, according to the Convention Credential Committee, had to do with a lack of personal information or the fact that the delegates were not registered Democrats.

The incident in Nevada illustrates the conundrum faced by the Democratic Party. Hillary Clinton has more delegates and votes than Bernie Sanders. These delegates include a large number of so-called “super delegates” which consists of office holders and party officials who are free to support any candidate, no matter what the voters have to say about it.

However, Sanders supporters are of the opinion that the lead was brought about by dodgy tactics employed by the Clinton campaign with the tacit approval of the Democratic Party establishment.

Clinton started the 2008 campaign with the belief that the presidency was her right rather than something that she had to persuade voters to grant her. She saw the Democratic nomination taken away from her by a then unknown, charismatic African-American senator named Barack Obama.

The rest, as they say, is history. Clinton is determined that the same thing will not happen to her again, particularly not at the hands of an elderly socialist from Vermont.

The ill feeling that is developing among Sanders supporters represents a danger for the Democratic Party. An enthusiasm gap (4) has developed between Clinton and Sanders.

Clinton is a terrible campaigner, with all the charisma of a wet dishrag. Sanders, whatever one thinks of his ideas, is on fire when he is on the stump. His message of economic populism is appealing to a certain segment of the electorate, especially young people.

As Politico reports (5), Clinton faces a danger if she cannot persuade enough Sanders supporters to her corner when she gets the nomination. Of course, if she is indicted because of the email scandals, every calculation for the outcome of the election will be tossed to the winds.

The example that Democrats are facing is 2000, when Ralph Nader, the candidate of the Green Party, is thought to have taken enough votes from Al Gore to throw the razor-thin election to George W. Bush.

Sanders is not likely to go third party. For one thing, sore loser laws in some states forbid a major party candidate from going the third-party route. The deadlines for getting on the ballot are starting to pass in a number of states.

The danger is not with Sanders himself, but his supporters. Some might actually support Donald Trump, another economic populist, albeit of a different variety than Sanders.

The Green Party also represents an option for disgruntled Sanders voters. Many of them may just stay at home.

With some general election polls closing up between Clinton and Trump, the Democratic nominee may have found herself having fended off the Sanders challenge at the cost of being defeated in November by the most unlikely of Republicans, a reality show star playboy.