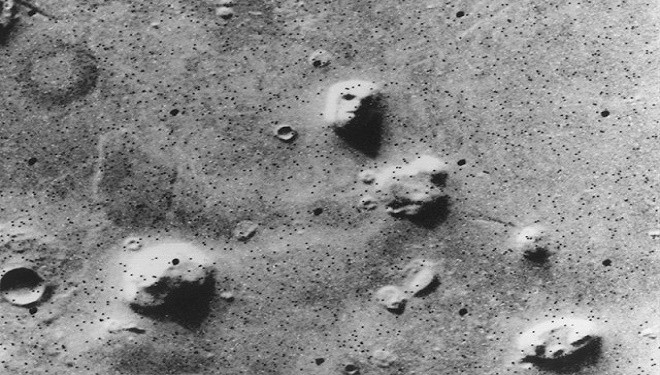 Mark Whittington view more articles
Facebook 0 Twitter 0 Pinterest 0 Google 0 LinkedIn 0
People have been seeing things on Mars that aren’t actually there ever since the 1870s, when an Italian astronomer named Giovanni Schiaparelli thought he saw features on the Martian surface that he called “canali.” The word is Italian for “grooves” or “channels”.

However, a mistranslation caused the word to be rendered in English as “canals”. An American astronomer named Percival Lowell ran with the idea of canals on Mars and published several books in the 1890s and the early 20th century postulating that Mars had an advanced civilization that had built a planet-wide system of canals to bring water down from the poles for irrigation.

The idea of canals on Mars was swiftly debunked by the scientific community, which noted that they were tricks played on the human eye. But the meme persisted through the first half of the 20th century.

Fast forward to 1976. The Viking 1 orbiter took a photograph on the Cydonia Plain on Mars that looked remarkably like a face. Some people examining the image thought they saw buildings, such as pyramids, surrounding the face. The idea of a face on Mars went viral, showing up in books and movies and, later, conspiracy sites.

Richard C. Hoagland, an author and conspiracy theorist, created a cottage industry surrounding the face and the alleged NASA plot to cover it up. However, in 1998, the Mars Global Surveyor snapped a picture of the region with cameras with far greater resolution than the one on Viking 1. The image that it took was of a natural rock formation. Tricks of light and shadow made it appear to be a face in the previous photos. NASA conspiracy theorists remain unconvinced, however.


Alien Base on Mars

More recently, some Mars enthusiasts, looking at the map of Mars provided by Google Earth, think they have seen an entrance to an underground alien base on the Martian surface. These images are caused by the way Google’s algorithm lines up images taken from different sources. Mars conspiracy theorists claim that NASA unsuccessfully tried to airbrush the image out.

Strange images have been noticed by some people coming from robots on the Martian surface, such as the Mars Curiosity. A UFO enthusiast named Scott Waring thinks he saw an artificial light shining from the ground near the Kimberly Waypoint. Evidence of an underground base? More likely a cosmic ray hit the Curiosity rover at the moment it snapped the image.

A Canadian Mars anomaly hunter named Andre Gignac looked at images taken by the Mars Opportunity Rover at the Endeavour Crater and thought he saw an alien complex of bunkers and missiles. That, at least, is his interpretation of a dark spot on the crater wall. Mars Spirit is alleged to have taken a picture of a book lying on the Martian surface. Mars Curiosity is supposed to have seen a dinosaur skull and an Egyptian ankh.

Scientists ascribe these alleged images to a phenomenon called pareidolia, the tendency of the human brain to ascribe meaning to what otherwise are meaningless jumbles. That explanation has not stopped people from seeing strange objects lying about the Martian surface like discarded trash. Was There a NASA Cover-Up?

The standard response by Mars anomaly enthusiasts when offered more mundane explanations besides aliens for strange images is to posit a NASA cover-up.

Leaving aside the implausibility of keeping such explosive news as aliens on Mars secret, the question of motive comes into play.

The next big project that the space agency has been charged with is the so-called Journey to Mars, a plan to place astronauts on the Martian surface by the 2030s. What event would be more likely to give the plan generous funding than proof of alien life on Mars?

Even, if, for some unknown reason, NASA wanted to keep quiet about aliens on Mars, a number of private ventures are in the works focusing on the Red Planet.

Recently, Elon Musk, the CEO of SpaceX, has announced plans to send a probe to the Martian surface in 2018 and human explorers as early as 2024. What would be better to drum up investment in the scheme than proof of alien life on Mars? Trading agreements alone would more than pay for such a venture.