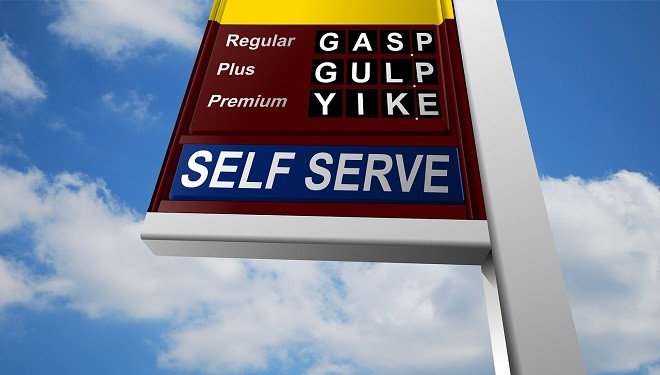 On one level, this is not surprising. The oil glut, brought on by the current economic slump and an abundance of production, both in the traditional oil-producing states such as Saudi Arabia and in fields opened up by fracking, has persisted.

Oil companies seem to have determined that it costs less to store the product offshore, at a port near one of the busiest shipping lanes on the planet, rather than try to sell it at rock-bottom prices. The idea is that the companies are hoping for a spike in oil prices, after which they can release the product and make a killing.

Is something nefarious going on? A YouTube video (2) by someone calling himself DAHB0077 seems to indicate this, but not what that plot might be.

Rumors persisted that big oil was storing petroleum in tankers during the energy crises of the 1970s to keep shortages and the high prices that accompanied them going on. But saving oil during an oil slump only makes sense if one is hoping for higher prices sometime in the future. Releasing the oil prematurely would drive the cost of the product down even further, with devastating effects on producers.

Oil prices have doubled since winter, according to the Wall Street Journal (3). If the trend continues, the companies that are holding back oil at the Port of Singapore may have made a good bet. Still, output from the OPEC countries is expected to continue at current levels, largely due to a conflict between Saudi Arabia and Iran.

Since the end of economic sanctions, Iran has been keen to see the price of oil increase, since that would benefit that country’s export income. However, the Saudis would like to see oil prices kept relatively low. Low oil prices hurt not only Iran but Russia and fracking operations in the United States (4) and elsewhere, which Saudi Arabia perceives as rivals.

Those opponents include fracking operators who have so lowered the price of oil and gas that the White House’s renewable energy policy, which encourages solar and wind, among other “green” sources, has been compromised. Ironically, the Saudis are getting into the fracking business, as well. However, in the short term, the current oil glut has harmed the fracking industry to some extent.

What the future holds is unclear. Absent a war in the Middle East that threatens oil production and distribution, a catastrophic oil price shock is unlikely.

As the price of oil increases, dormant domestic production becomes more profitable. The advance of drilling technology is decreasing the cost of oil production all the time.

Future public policy is also a factor. President Barack Obama has restricted oil production on federal lands and offshore to further his green energy agenda. However, that policy may change, depending who is elected president this year.

Environmental groups such as the Sierra Club find the idea appalling. However, Trump’s idea will likely be appealing to blue collar voters who would likely get jobs in a push to expand the production of fossil fuels.