In the 1800s, Some UFOs Were Experimental Airships 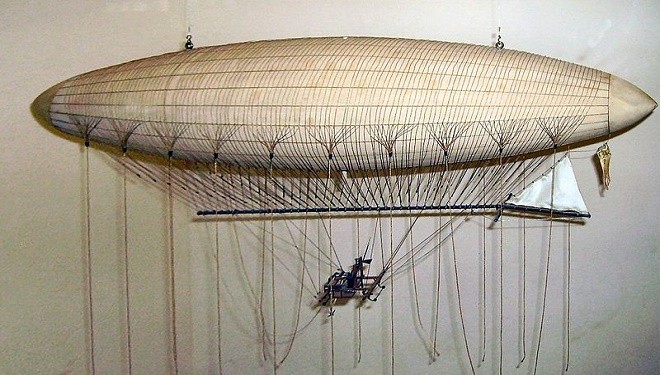 Since then, the idea that alien spacecraft are regularly visiting the Earth and that governments are covering it up has entered public imagination and influenced popular culture.

However, people have been seeing strange objects in the sky for much longer than the past 70 years. According to an article by Jerome Clark and Loren Coleman, a rash of UFO sightings occurred in the latter part of the 19th century that coincided with the development of airships (2).

The idea of attaching an engine to a balloon and making it into a vehicle that could take people and goods from place to place had been around since the 1780s (3).

The first practical airship was built and tested by a Frenchman named Henri Giffard in 1852. The airship was filled with hydrogen gas and was propelled by a three-horsepower steam engine.

The Giffard airship achieved liftoff and was able to travel about six miles an hour. Giffard was not able to control the vehicle entirely, however.

The first controlled flight of an airship occurred in 1884 when two Frenchmen, Renard and Krebs, flew a machine that had a nine-horsepower, electrically-propelled airscrew. The airship, called La France, was able to travel at 15 miles an hour.

The development of the airship, for both military and civilian use, took off, particularly in Germany under the aegis of Count Ferdinand von Zeppelin. The British Royal Navy followed with its own airship fleet. Airships served as reconnaissance aircraft in World War I and were used by the Germans in the first aerial bombing raids on Great Britain.

After the war, the golden age of airship travel occurred, with people riding through the air in relative luxury across the Atlantic. The era of airship travel came to an abrupt end with the Hindenburg disaster, which took place on May 6, 1937. Airships subsequently have been used for some military applications and for real-time TV coverage of sporting events. But air travel passed to heavier-than-air craft.

Most of the sightings related by Clark and Coleman were clearly of airships, piloted by people experimenting with the technology. Sometimes the flying object would land and passengers, clearly human, would get out and even interact with people who had been watching them from the ground.

However, an incident related in the St. Louis Post-Dispatch on April 19, 1897, resembles a classic alien encounter from modern times, albeit with Victorian overtones.

W.H. Hopkins, a traveling agent for Hartford Steam Boiler Inspection and Insurance Company, relates how he was wandering the hills east of Springfield, Missouri. He came upon an object that he took to be a landed airship. But standing near it he saw a beautiful, naked woman with golden hair. A man was nearby who was similarly well proportioned. They showed him the inside of their craft and, through sign language, indicated that they came from Mars, or so Hopkins surmised.

The same month and year, a number of other UFO sightings that may have been airships took place, in Iowa, Illinois, and Texas.

Why did airship sightings morph into the kind of UFO sightings more likely to take place in modern times? At the time of the Missouri incident, the Italian astronomer Giovanni Virginio Schiaparelli first sketched a map of Mars with “canali” which got mistranslated to “canals” (4) and thus excited the interest of American astronomer Percival Lowell, who published several books popularizing the idea of an intelligent civilization on the Red Planet.

H.G. Wells published “War of the Worlds” (5) in 1898, which depicted an invasion from Mars. Thus, people began to believe that alien life existed on other worlds and might cross the interplanetary gulfs to visit Earth. Airships thus became spaceships in the popular imagination. And the rest, as they say, is history.