Why the Apocalyptic and Satanic Imagery for Swiss Tunnel Ceremony?

SallyPainter view more articles
Facebook 0 Twitter 0 Pinterest 0 Google 0 LinkedIn 0
It was perhaps the most bizarre and confusing opening ceremony in history. Even Swiss citizens were scratching their heads after enduring what some journalists called an “insane” performance (1).

It was the June 1, 2016 opening ceremony of the Gotthard Base Tunnel project that was 17 years in the making at a cost £8.5bn. The tunnel is 57km long and cuts through the Swiss Alps connecting Switzerland to Germany. Traveling at 155mph, the trains cut the travel time by an hour. It is a marvelous engineering feat, but the strange ceremony has greatly overshadowed that accomplishment.

The Internet is blazing with accusations that the ceremony was a satanic celebration of creating a passageway for the devil to emerge into the world.

The devil was the prominent figure in the ceremony, based on an old tale about the mountain range and how the villagers outsmarted the devil. BBC explained the ceremony as “celebrating Alpine culture and history”. However, the ceremony showed a freed Satan that conquered the world and this upset many Christians (2).

The story is told that the Swiss villagers asked the devil to build a bridge so they could cross over the mountain range. The devil agreed, demanding the soul of the first one to cross the bridge.

When it came time to pay up, the villagers sent a goat across the bridge. Enraged, the devil reached for a large boulder to crash and destroy the bridge. A woman put the mark of the cross on the rock and the devil was unable to touch it. The devil then descended back inside the mountain.

The ceremony was broadcast across Europe, but again, most of the viewers were confused, perplexed and befuddled by the performance of 600 actors/dancers dressed in equally bizarre costumes.

With the first half of the ceremony delivered in the tunnel and the second half outside, it was a significant part of the storytelling. What was conveyed to the audience was the devil being underground and through the building of the tunnel was able to emerge into the world. At least, that’s the analysis circulating via twitter, YouTube and other social media.

The ceremony opened with a team of five white horses pulling a stagecoach through part of the tunnel while the driver trumpeted their arrival. Some people believe the horses and trumpeting were both symbols of the four horsemen with the trumpets blown at the time each of the seven seals will be broken. These symbols of the Apocalypse described in The Revelation of the Holy Bible were the tamest and most benign part of the entire production that quickly grew stranger and stranger.

The symbolism of the production might have been lost on some viewers who were unaware of the Swiss mythological origins; however, the majority of the people, at least those who took to the Internet to discuss it seemed to have figured out what was being conveyed. Their analyses claims the meaning of the ceremony was far from what was publicized.

Many Christian commentators immediately began discussing what they felt was a not so subtle form of satanic worship (3). They stated that the central figure, a goat man, was the symbol for Satan.

However, the Daily Mail explained, “the celebration strived to both thrill and offer a show of European solidarity.” Most people didn’t connect those dots. Instead, they felt pretty certain the entire show was satanic in content. 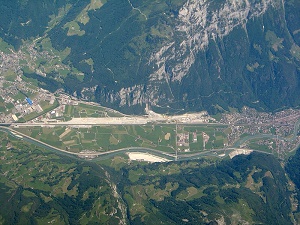 The production was orchestrated by German director Volker Hesse and reportedly cost a whopping 8 million euros. During and after the ceremony, people were tweeting almost frantically in their attempts to understand not just what it was about, but more importantly why the production was allowed to be so strange and in their opinions satanic.

The tunnel opening ceremony seemed to ignite the Internet with speculations. Some people claimed the production was an Illuminati ceremony; others declared it was a satanic ceremony and some pointed out it had pagan roots and wasn’t satanic at all (4).

Still, a few turned to the director’s own words in a Swiss interview conducted at the end of June when he was awarded the Swiss Theater’s highest honor, the Hans Reinhart Ring. Hesse was asked how the theater had changed for him since his earlier productions in the 1970s.

Using Google to translate the interview, Hesse’s response was that he was raised Catholic and his earlier works were “very strong in politically confrontational environment.” He stated that he made a “Karl Marx Revue” and it “led to my sacking.”

Hesse explained that his style was “agitational theater” also known as political theater. He also claimed that he’d “celebrated wild black masses.” The translation isn’t precise enough to understand if he was referring to his stage productions or his personal life (5).

Watching the video of his Gotthard Base Tunnel opening ceremony, it appears that those early theatrics have stayed with him. 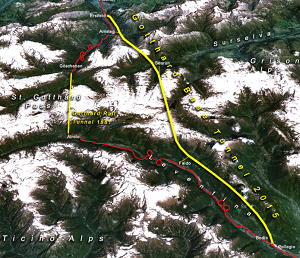 The ceremony seemed to spiral downward into greater strangeness and chaotic messaging, especially the last half. It was difficult to understand how the ceremony represented the tunnel, other than the first few minutes when dancers were dressed in orange jumpsuits and hard hats. Those costumes quickly devolved when the actors peeled off their costumes to dance about in their underwear.

Some of the characters in the production included:

–> A topless dancer wearing what appeared to be a diaper had a large baby’s head. Sporting a pair of wings, the baby flew over nine dancers lying on the floor of the tunnel. The dancers represented the nine workers who died during the tunnel construction (6).

–> Men and women marched out with twigs in their hair, carrying large limbs and one man had a bird’s nest for a headdress.

That second half of the ceremony outside grew worse with even more bizarre symbolism. A few of the underwear clad actors descend on the dignitaries sitting in a covered platform. Two women balanced on the railings taunting the men. The performance grew incredibly obscene when the goat man had sex with one of the other goat beasts and a woman who then gave birth to a mini-her; or did it represent a clone?

Perhaps it was open to interpretation the way so much of the production was. The show ended with the goat man (aka devil) being crowned king and all the actors bowing before him and the tunnel was part of that iconic worshiping.

As part of the backdrop to the outdoor production, a big screen showed a wide range of strange and odd images, such as a collection of eyes forming a vortex, Satan before he came onto the main stage, the tunnel being built and workers climbing up then plunging to their deaths and many other disturbing images.

The audience, including the leaders of Germany, Italy, France and Austria gave the performers a standing ovation. Perhaps those in attendance had a greater appreciation for the opening ceremony than the majority of online commenters.