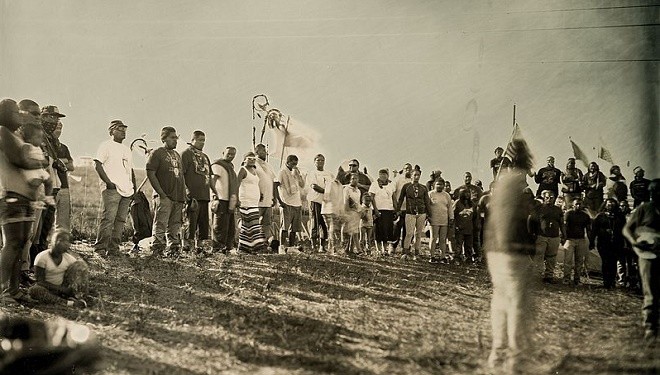 A group of Native Americans were staging a peaceful protest against the controversial $3.8 billion oil pipe line that is being constructed in North Dakota. Their stated goal was to protect their public drinking water and indigenous lands.

While the demonstrators waved placards and chanted “water is life”, a group of armed officials, reported to be hired by the oil companies, moved into the crowd unleashing vicious dogs and pepper spraying the group.

A video of the scene was posted on social media, showing the private security guards poised with their pit bull dogs at Standing Rock in North Dakota trying to intimidate what was said to have been a peaceful protest (1).

Steve Sitting Bear, a spokesperson for the Tribe, said that six people had been bitten by the vicious dogs, including a child (2).

More than 30 people were sprayed with tear gas by the security guards. While the violence was taking place on the ground, a North Dakota State Patrol helicopter hovered overhead.

An image posted on social media shows a dog jumping up and attempting to bite a Native American man. The image sparked strong condemnation and a wave of angry comments about the actions of the pipeline company and how it is invading native lands.

According to Native News Online, the security company Dakota Access pipeline employed attempted to disengage the protest by unloading:

Vicious dogs to push the water protestors off the land. The dogs were blindly lunging at everyone, even DAPL construction workers! Tear gas has been deployed by DADP security force to end the nonviolent direct action at the construction site, just off Hwy 1806, just one mile north of Red Warrior Camp.”

The violent incident took place not far from the protest camp where hundreds of people have gathered to join the Standing Rock Sioux protest.

The native tribe is protesting against the decision made by the Army Corps Engineers to give permits to the Energy Transfer Partner’s Dakota Access pipeline, which crosses the Dakotas to Iowa and to Illinois.

As the Associated Press reports, the tribe is afraid the construction of the pipe will damage sacred sites and possibly contaminate the drinking water of thousands of people living in the Standing Rock Sioux Reservation, and possibly millions of others farther downstream.

Tim Mentz, a tribal preservation officer, said court documents revealed that researchers had uncovered sites of historical interest, including burial rocks known as cairns, which are of interest to Native Americans.

David Archambault, Standing Rock Sioux’s chairman, spoke of how the construction teams had removed the topsoil of an area of more than two miles in length.

“This demolition is devastating,” Archambault said in a statement, adding: “These grounds are resting places of our ancestors. The ancient cairns and stone prayer rings there cannot be replaced. In one day, our sacred land has been turned into hallow ground.”

What are your thoughts on the attack made by security guards on protesters staging a nonviolent protest at the construction site of a multi-million-dollar oil pipeline in North Dakota?