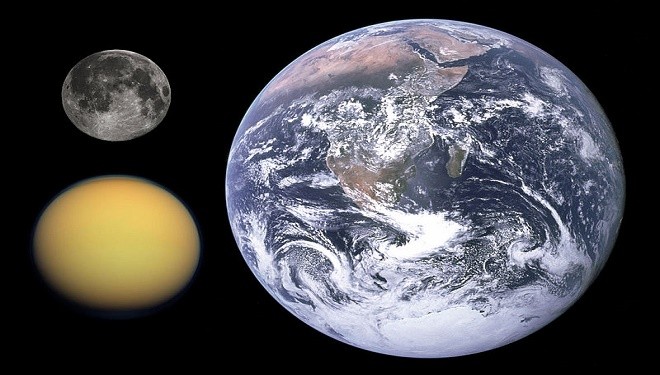 Mark Whittington view more articles
Facebook 0 Twitter 0 Pinterest 0 Google 0 LinkedIn 0
Two worlds in the solar system have liquid oceans, lakes, rivers, and streams that are exposed to their atmospheres. One of those worlds is Earth, which is 71 percent covered with water (1). Without water, life would not exist on the planet that we call home.

The other world that has bodies of liquid is Titan (2), a moon of Jupiter. Titan is partly covered with bodies of liquid methane and ethane, which acts like water does on Earth in that it evaporates, forms clouds in the mainly nitrogen atmosphere, and then condenses and falls as rain.

Titan has canyons (3) that have been cut by the flow of liquid methane, much like the Grand Canyon on Earth has been created by water flows over millions of years.

Europa, a moon of Jupiter, and Enceladus, another moon of Saturn, have water oceans, but they are encased by layers of ice. The only other oceans that are readily accessible are the strange, frigid seas of Titan. NASA sees this fact as an opportunity.

The space agency has been contemplating a way to explore the seas of Titan using a boat or a submarine (4) for some time. Inverse recently published a piece describing the latest thinking on the concept (5).

The submarine would carry an array of instruments that would study the methane oceans of Titan, ascertaining its chemical composition, measuring the currents and tides, and mapping the ocean floors. Needless to say, the submarine would also be equipped to find out whether some kind of life exists on Titan.

Because Titan is such a long distance away from Earth, the submarine would be designed to sail the methane seas of Titan autonomously. Periodically it would surface and transmit its findings to Earth, probably bouncing the transmission off of a satellite orbiting Titan, which would explore the moon remotely as well as serve as a communication relay.

A number of technical problems have to be solved before a submarine from Earth can splash down on Titan and start to sail its oceans. Methane oceans are denser and much colder than oceans of water. The submarine has to be able to change depth and survive for extended periods of time over a billion kilometers from Earth. Since a radio signal would take just under an hour and a half to reach the submarine, Earth-based controllers would not be able to respond to an accident or a malfunction in real time.

The question arises, how long do we have to wait before the submarine can start to explore the methane oceans of Titan? The answer largely depends on budgets and advances in technologies. The Inverse article suggests that 2038 would be an ideal launch date.

Almost certainly a large probe like a submarine would have to be launched to Titan with some version of the heavy-lift Space Launch System (6). The SLS is being contemplated for a variety of missions to the outer planets, such as the planned orbiter and lander to Jupiter’s moon Europa and orbiters to Uranus and Neptune. 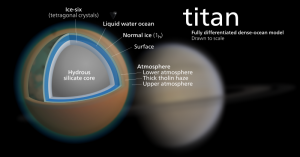 Advances in interplanetary propulsion would help things along as well. The way things work now, a spacecraft headed to any deep space destination is blasted out of low Earth orbit and then coasts for however long it takes, whether it is one of the numerous probes headed for Mars or the New Horizons, which flew by Pluto in 2015. The spacecraft has fuel for course corrections and orbital insertion or landing on a world’s surface, depending on the mission.

Some spacecraft, such as the Dawn, which recently explored Vesta and Dawn, use an ion drive (7) to propel them through the solar system. An ion drive uses electricity to create ions from propellant such as xenon to create thrust.

The thrust is small compared to that of a chemical rocket. But an ion engine runs for many hours or even days, steadily building up acceleration. Thus, the time it would take for the submarine to reach Titan would be significantly reduced.

Thus, in just over 20 years, a rapt planet will see images of the strangest ocean that a vessel from Earth has ever sailed upon or beneath. It will be a very good time to be alive.