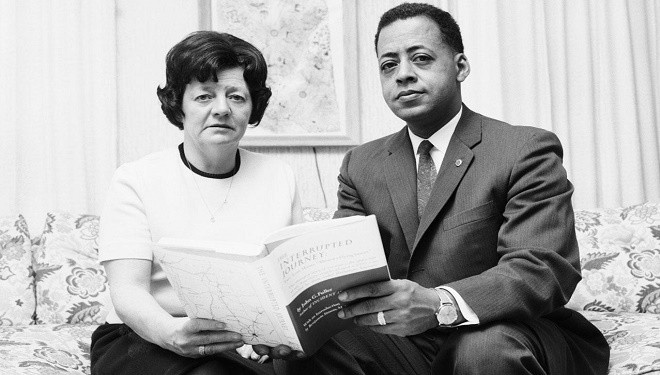 The case took place in 1961, when Betty and Barney Hill reported sighting a UFO as they drove home to Portsmouth, New Hampshire from a vacation in Canada. When hypnotized, the couple both separately described being abducted by aliens, shown around a spacecraft, and then subjected to medical examinations.

One of the most intriguing elements of the Hill’s abduction case relates to Betty Hill’s dress. In 2003, Frontier Analysis Ltd. compiled a report with the subject line ‘Analysis of the Dress Worn by Betty Hill During the September 19, 1961 Abduction in New Hampshire’.

When Betty returned home after the alleged UFO abduction incident, she reports folding her dress and placing it in the bottom of her closet, where it remained for several days. When Betty went to remove the dress, she noticed it was covered in a pink powder. Betty put the dress in the sun, where the powder blew away but stains marked the fabric.

Damage had also occurred on the dress, including a tear from the waist to the hem. The top of the zipper was also ripped.

After hanging in Betty’s closet for the best part of 40 years, the dress finally got sent for analysis. The analysis concluded that the discolored pink areas of the dress had suffered chemical effects on both the dye and the fiber. The study also found the fabric was coated with a “biologically derived material” composed mostly of protein.

The Frontier Analysis Ltd. report concluded that the substances found on the dress were not natural and came from an external source.

“The above results clearly rule out any natural substances originating from Betty such as urine, perspiration and vomit. This material came from an external source ruling out urine and Betty’s perspiration,” noted the official analysis of the dress (2).

Phyllis Budinger, an active member of MUFON of Ohio, who was selected as MUFON’s ‘Ufologist of the Year’ in 2013, commented on the analysis of Betty Hills’ dress (3). Budinger recalls how the DNA analysis of a sleeve of the dress found alpha proteobacterium on the fabric.

This bacterium is found in soil and water. Phyllis Budinger says she found this interesting because the bacteria would have had to have come into contact with the front of the sleeve of the dress if Betty was laying flat on the ground, which would have been highly unlikely.

Budinger notes that there was one time when it is known that Betty’s dress was on the ground. When the “dress was removed from Betty in the craft and thrown crumpled on the craft floor.”

“There is informative evidence regarding the altercation between the aliens and Betty as they escorted her to the craft.”

In 2009, Top Secret Writers reported how Betty Hill, in an interview with a well-respected journalist, spoke about her experiences in 1961 and how she was going to “make my million off this story” (4).

Tom Lambardo, the journalist who conducted the interview, admitted the remark ruined the story for him.

Does the unusual findings from the analysis of the dress suggest there could be more to one of the biggest alleged alien abduction cases in recent times?