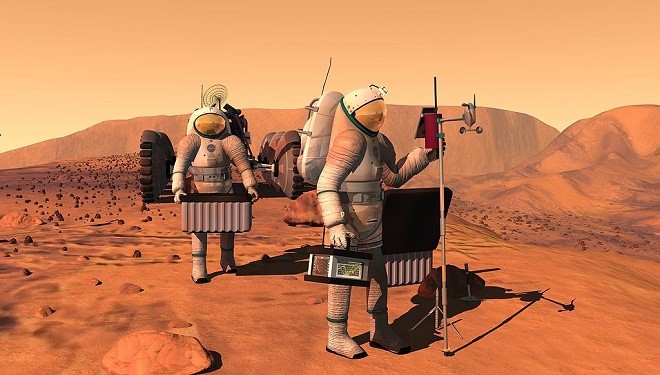 Mark Whittington view more articles
Facebook 0 Twitter 0 Pinterest 0 Google 0 LinkedIn 0
Recently President Barack Obama published a piece on CNN’s website touting NASA’s Journey to Mars program, which envisions a human landing on the Red Planet in the 2030s (1). NASA Administrator Charles Bolden expanded on the president’s message on his blog (2), noting how the International Space Station and a new program for private sector space modules to be deployed in cis-lunar space will advance the Journey to Mars (3).

These modules will serve as test beds for interplanetary craft that will eventually take astronauts to and from Mars.

The CNN piece garnered a lot of excitement in the media, but truth to tell the president was only reiterating an announcement he made at the Kennedy Space Center in 2010. One could be forgiven for concluding that Obama is engaged in legacy hunting (4).

If people land on Mars in the 2030s, President Obama will be fondly remembered long after the controversies over Obamacare and ISIS have been forgotten. But, as Ars Technica notes (5), the final decision will be in the hands of the next president and the next one after that. Fortunately, the Mars goal seems to be popular with Congress (6).

Two components of the Journey to Mars are now under development, the Orion deep space vehicle and the heavy-lift Space Launch System. NASA has scheduled an uncrewed test of the Orion/SLS that will send the spacecraft around the moon in 2018. In the 2021-23 time frame, NASA plans to send the first astronauts beyond low Earth orbit since the flight of Apollo 17 in 1972 in a lunar orbital mission. After that, the plan gets a little hazy.

NASA has hinted that further missions will be conducted to habitats in cis-lunar space to test technologies for the Mars expeditions.

However, in order for the Journey to Mars to work, NASA has to develop advanced propulsion systems, perhaps nuclear powered, habitats to sustain astronauts on the Martian surface, and a landing vehicle to take them between the surface and Mars orbit. This hardware will take a lot of money and development time.

The wild card in the dream of Mars concerns private-sector Mars efforts. Elon Musk of SpaceX has already started to develop a series of expeditions to Mars using a spacecraft called the Red Dragon starting in 2018 (7). Musk envisions sending the first people as early as 2024.

Recently, Musk expressed a bold vision of a Mars colony (8), using a spacecraft called the Interplanetary Transport System that will take 100 people to the Red Planet at a time. He thinks that a million people could live on Mars in 50 years (9). Musk’s business rival, Jeff Bezos of Blue Origin, has hinted at similar plans. Many believe that these plans are more aspirational than practical.

The reason for this assessment is water, known to exist in cold traps at the bottom of craters on the poles of the moon in the form of ice. Water can be refined into hydrogen and oxygen, the components of rocket fuel, making the moon a gas station on the way to Mars. The next president may mandate a return to the moon, perhaps as a commercial effort. 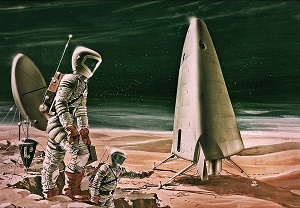 With these facts in mind, what would the first expedition to Mars look like?

In 2030, the first elements of a Mars base depart from Earth, carried by SpaceX Falcon Heavy rockets and Blue Origin New Armstrong heavy-lift rockets. The elements include habitats, robots, and machines for gathering oxygen, water, and manufacturing rocket fuel to be stored for later use.

At the same time, a practice run for the Journey to Mars is launched, consisting of an interplanetary craft with six astronauts. The expedition will not land on Mars but will spend several months in orbit around the Red Planet testing systems and tele-operating rovers on the Martian surface. Mars 1 will stop in cis-lunar space to be refueled with propellant manufactured at the Moon Village.

In 2032, the first expedition to Mars leaves cis-lunar space and arrives at Mars orbit six months later. Six astronauts land on Mars in a vehicle the size of a house near the prepared base. The first person to set foot on Mars sends a greeting to Earth that is not seen or heard for another 20 minutes. But when the images arrive across the interplanetary gulf, the day is the greatest in history since July 20, 1969.

The astronauts spend a year on Mars exploring its secrets and conducting experiments. Then they make a six-month return, arriving in cis-lunar space. An Orion spacecraft picks them up and returns the crew to Earth, the most celebrated heroes of the 21st century.