Will These Robots Be the First Mars Explorers?

Mark Whittington view more articles
Facebook 0 Twitter 0 Pinterest 0 Google 0 LinkedIn 0
Universe today has a story(1) about a project at MIT that involves a NASA-built humanoid robot called R5 or Valkyrie. Valkyrie was designed by a group of engineers at NASA’s Johnson Spaceflight Center (2) as an entry into the 2013 DARPA Robotic Challenge Trial, where it performed less than optimally.

NASA then partnered with a number of outside organizations to improve the robot’s performance with improved algorithms. The new and enhanced Valkyrie will become an entry in NASA’s Space Robotics Centennial Challenge, where it is hoped that it will perform better than it did three years ago.

The NASA challenge will set robots to do a number of tasks that would take place at a Mars base or lunar base. The functions include:

Previously to Valkyrie, another robot, dubbed Robonaut2 or R2 (3), was sent for testing to the International Space Station. R2 was designed to take over some of the mundane and time-consuming maintenance tasks the astronauts usually undertake, freeing up time to do experiments.

Often, when work has to be done outside the ISS, astronauts have to put on space suits and go EVA, a task that is often fraught with danger. Several astronauts have had their lives placed at risk because of suit malfunctions. A robot, on the other hand, would be able to perform the same maintenance tasks without endangering astronauts.

NASA is embarked on its Journey to Mars. Other countries and some private groups would like to go back to the moon. A concept is emerging that would involve the first footsteps on either world being trodden by robots instead of humans. The robots, perhaps like Valkyrie, would set up habitats and perform other tasks in advance of the first humans. When astronauts do join the robots, both will work side by side to explore the new world.

NASA and other space agencies have always used robots for space exploration. Modern versions include the Mars Curiosity rover now rolling across the Martian surface and New Horizons, which hurtled past Pluto over a year ago. But these robots are under the complete control of human programmers, who have to upload instructions, often across interplanetary distances, for the robotic probes to function. 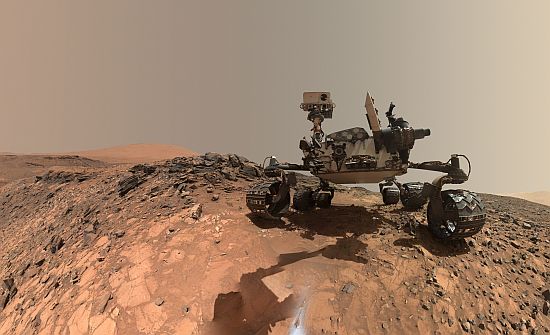 The difference with robots like R2 and Valkyrie is that they will be able to act autonomously, without the constant intervention of humans. That capability makes them ideal for exploring the surface of an alien world, where messages would take minutes or even hours to reach them. Autonomous robots will not only prepare the way for humans but will explore distant worlds, such as the moons of Jupiter and Saturn (4), that are out of reach by astronauts because propulsion technology is not able to take them there in a reasonable amount of time.

Paul Spudis, a lunar geologist who frequently writes about space policy, and Tony Lavoie from NASA’s Marshall Space Flight Center, developed a plan (5) to return to the moon that involved sending robots in advance to build the lunar base. The robots would also mine water ice, known to exist in the shadows of craters at the lunar south and north poles, and refine part of it into rocket fuel and store part of it for use by the astronauts. The first people back to the moon would have a well-stocked place to live when they finally get there.

Elon Musk, the CEO of SpaceX, recently ruminated about a Mars colony. The first colonists would have a number of “mining droids”(6) that would create underground areas beneath geodesic domes.

Years ago, huge arguments raged over whether humans or robots were best suited for space exploration. As it turns out, the answer is that both are necessary to push back the high frontier.