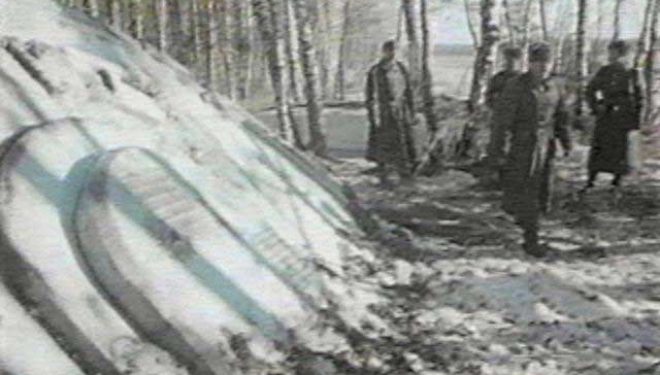 Mark Whittington view more articles
Facebook 0 Twitter 0 Pinterest 0 Google 0 LinkedIn 0
A CIA document (1) has surfaced relating an account published in a Ukrainian newspaper, Ternopil Vechirniy, of an encounter between a Soviet Army unit on a routine training exercise and a low-flying UFO.

According to the account, someone fired a surface-to-air missile at the UFO, bringing it down nearby. Five alien beings emerged from the wreckage, merged into a single, spherical entity, and then emitted an explosive flare that turned 23 soldiers into a substance resembling limestone.

Two soldiers were far enough away to have survived the effect. The account states that the petrified soldiers were taken to a secret research institution near Moscow for further study. No word about what happened to the aliens or their crashed spacecraft is included in the account.

A “CIA representative” is quoted as calling this a “menacing case.” A reference to a KGB file that contains photographs and other documentation is included.


Vetting the Source of the Story

The story sounds very concerning. The idea that space aliens have a weapon that can turn people into stone, sort of like the ancient Greek demigod Medusa, would certainly mean that they should be approached with caution.

However, one problem exists in the story, and it is included in the file without a hint of irony. The Ternopil Vechirniy story is a reprint from the Weekly World News.

Sure enough, a brief search of the Internet yields the WWN story (2) in question. The incident is said to have taken place in 1987 in Siberia. The Weekly World News account mentions that the crashed UFO is also at the Russian secret lab but that no discernible controls or propulsion technology could be ascertained.

For the gentle reader who is familiar with the long and storied history of the Weekly World News (3), he or she must be wondering how an account that originated in such a publication wound up in a CIA file, to begin with. Whoever compiled the file either was not familiar with that periodical’s approach to journalism or has quite the sense of humor.

The Weekly World News started publication in 1979 as a supermarket tabloid that featured faked stories covering the occult, UFOs, Bigfoot sightings, Elvis lives stories, an entity called Batboy, strange political stories, and the impeding apocalypse of the week, among many others.

These fanciful stories, written in the style of a supermarket tabloid, were often accompanied by doctored photographs. The tabloid ceased publication in 2007 but then relaunched as an online-only journal in 2009. Current stories (4) include an account of how the aliens had endorsed Donald Trump for president, how Earth is going to collide with the mythical planet Nibiru, and how Megyn Kelly really quit Fox News to pursue a career in modeling. Of course “authentic” (i.e. not cooked up by tabloid fiction writers) Russian UFO stories do exist. People saw strange things in the sky in the old Soviet Union just as they have everywhere else, and speculation abounds that at least some of the sightings were of alien spacecraft.

Indeed the KGB had a program (5) to study the phenomenon much like the United States Air Force’s Project Blue Book. The Soviets noticed that the objects seemed to appear in areas of “heightened tension” in the vicinity of Soviet military bases. The KGB concluded that the objects were American reconnaissance craft of some sort.

No evidence exists that the American military or the CIA possessed such technology in the 1970s and 1980s. Aerial drones would certainly be a candidate, but they did not come into general use until the late 1990s and have become common in the current century.

The upshot is that the gentle reader should approach all accounts of close encounters with a degree of healthy skepticism, even when they come from an official source.