Will NASA Be Able to “Grow” a Mars Atmosphere?

Mark Whittington view more articles
Facebook 0 Twitter 0 Pinterest 0 Google 0 LinkedIn 0
Recently, at the Planetary Science Vision 2050 Workshop that was held at NASA headquarters in Washington, Jim Green, NASA’s Planetary Science Division Director, presented an unexpectedly simple idea to terraform Mars, which is to say make the Red Planet more Earthlike. The idea is to deploy a magnetic shield that will ward off solar wind from Mars, allowing its atmosphere to reconstitute, according to Popular Mechanics(1).

“Green discussed launching a ‘magnetic shield’ to a stable orbit between Mars and the sun, called Mars L1, to shield the planet from high-energy solar particles. The shield structure would consist of a large dipole—a closed electric circuit powerful enough to generate an artificial magnetic field.”


How to Grow a Mars Atmosphere

“Such a shield could leave Mars in the relatively protected magnetotail of the magnetic field created by the object, allowing the Red Planet to slowly restore its atmosphere. About 90 percent of Mars’s atmosphere was stripped away by solar particles in the lifetime of the planet, which was likely temperate and had surface water about 3.5 billion years ago.”

Mars may have had complex lifeforms when it still had an appreciable atmosphere and bodies of water. So far, various space probes have not been able to find as much as a Martian bacterium in the arid, chilly deserts that the Red Planet has become.

Frozen carbon dioxide would start to turn into gas, thickening the Martian atmosphere until it was half the pressure of Earth’s at sea level. At the same time frozen water would melt as the greenhouse effect started, filling the dry ravines and basins with about one seventh of the water Mars had billions of years ago.

After this process, which would likely take a few years, genetically altered plants and animals could be introduced to Mars to create an ecosystem(2). People may have to have oxygen tanks while going outside, since the atmosphere would be about the same density as on many mountains on Earth. But future Mars colonists will not have to wear bulky space suits when venturing beyond their habitats. 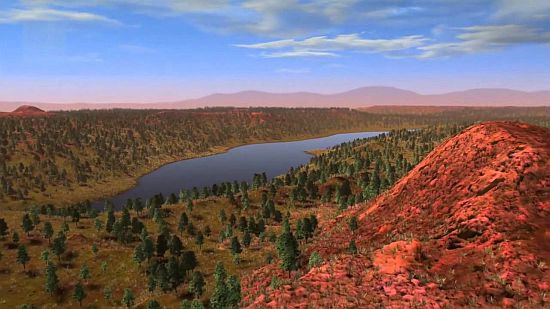 The remarkable aspect of Green’s idea is how it would terraform Mars in such a short time. Universe Today recently ran an article(3) that surveyed some of the proposed methods of turning the Red Planet green. The favored methods include pumping the Martian atmosphere with greenhouse gasses to gradually raise its temperature to coat the Martian poles, which would allow the CO2 and water ice to absorb more heat, turning the former into vapor and the latter into liquid water. The problem is, these methods might take centuries.

The dream of colonizing Mars has driven space visionaries for decades. SpaceX’s Elon Musk recently presented his idea of founding a Mars colony(4), using huge spacecraft that could take 100 people at a time. Musk has expressed the desire that he spend his declining years as a settler on the Red Planet.

People who propose terraforming Mars will get an argument from some in the scientific community and environmentalists(5) who prefer that the Red Planet be left alone in its current state, to be used as a planetary laboratory for study and not as a new home for Earthlings.

On the other hand, proponents of Mars settlements paint an inspiring vision of a new world where people could make a fresh start, serving much the same role as the Americas did up until the end of the 19th century. Robert Zubrin, a proponent of Mars colonies, suggests that the opening of a Martian frontier would invigorate Earth civilization(6), just as the Americas did Europe. Green’s idea of a magnetic shield makes that dream more possible.

Will These Robots Be the First Mars Explorers?   0