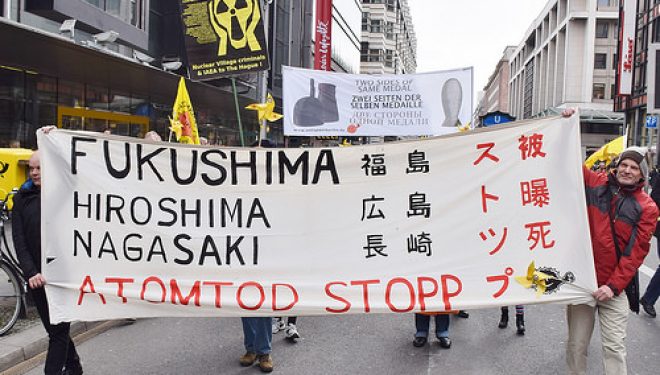 GabriellePickard view more articles
Facebook 0 Twitter 0 Pinterest 0 Google 0 LinkedIn 0
Scientists and experts are warning of a mysterious radioactive cloud, which could be linked to radiation from the Fukushima Nuclear Plant. ENE News lists a series of reports highlighting the ‘worsening situation’ involving radioactive particles floating across Europe. Interestingly, the story is absent in much of the mainstream media and is confined to a small trunk of alternative and local media sources.

On February 25, 2017, the (1) Jersey Evening Post published a story about the Environmental Health’s warnings that a cloud of mysterious radioactive particles had been detected in northern Europe and Paris and could be heading Jersey’s way.

The report notes how conspiracy theorists are suggesting the radioactive cloud has been caused by secret Russian bomb testing or an unreported nuclear accident.

A day earlier the (2) Wakefield Express reported the story, focusing on the fact a US Air force plane, which had assisted in the aftermath of the Chernobyl disaster in 1986, has been called upon to help find the source of the mysterious radioactive cloud, which is “heading towards the UK.”

A similar aircraft had also been used in the wake of the Fukushima incident in Japan six years ago, used to collect chemical substances and particles in the atmosphere in the weeks and months following the disaster.

The story cites speculation that Putin is testing nuclear weapons in Novaya Zemlya. Though the Comprehensive Nuclear-Test-Ban Treaty Organisation has ruled out that nuclear testing has taken place recently. (3) EuroNews also reported about Europe’s plight against a “recent release” of radioactive Iodine-131. EuroNews speaks of how authorities have been left “baffled” after traces of radioactive Iodine-131 have been detected in seven European countries. The article notes how France’s IRSN have stressed the amount of radiation detected does not pose as a health threat but admit its detection is proof of a “rather recent release.”

The story also links the mysterious cloud’s origins to a top secret Russian nuclear missile test launch or to a leak from a nuclear power plant.

What is interesting is that just days after the reports of the radioactive cloud making its way across Europe were published, news was also made by alternative news sources about “unexpected dents” found at the Fukushima plant, with “emergency measures” made because of the dents. (4) One such source is (5) The Mainichi, a Japanese daily newspaper. The Mainichi write about how, despite almost six years passing since the nuclear disaster at Fukushima Nuclear Power Plant, the search for melted nuclear fuel continues.

“Fukushima accident is not over – not by any means… The cancer rate in Japan is going to rise steadily. It’s going to be denied by the government because there’s no transparency on the issue in Japan,” says Charles Perrow.

Perrow also refers to three huge globs of molten fuel sitting on the bottom of the ocean, “giving off radiation, and sending that radiation into the water though the river that’s underneath the plant.”

“And it’s going out into the ocean and we’re seeing damage in the marine life in the West Coast of the U.S. and British Columbia,” says Perrow. (7)

Reports have also been made about sea lions contracting and dying from cancer at “alarming rates” along the US West Coast.

Could it be that these incidents could all be linked to the (8) ongoing aftermath of the Fukushima disaster of 2011? And why is the mainstream media predominantly ignoring these stories? Could it be, as Charles Perrow suggests about the Japanese government, because governments are choosing to deny and ignore the ongoing effects of the disaster, possibility due to lack of transparency?