Truth Revealed: Both Fire AND Ice Sunk the Titanic 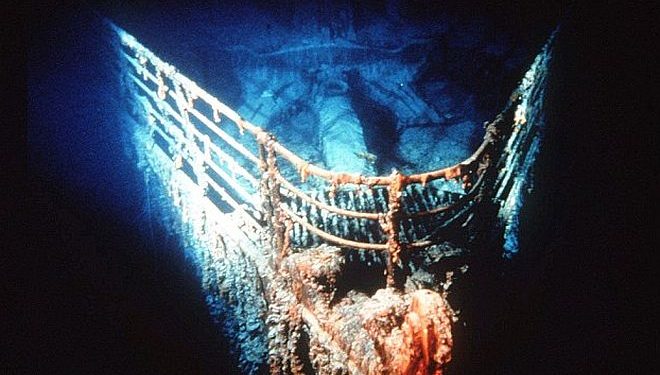 SallyPainter view more articles
Facebook 0 Twitter 0 Pinterest 0 Google 0 LinkedIn 0
The official ruling about the sinking of the Titanic stated it was “an act of God”.

The inquiry presented to England’s 1912 Parliament stated the ship travelled at “high speed” in icy waters known to be dangerous. The inquiry further stated, this didn’t give the crew the “opportunity to avoid the fatal collision” with the iceberg (1).

Since that disastrous event, the world has believed it was an accidental collision with an iceberg that sank the unsinkable ship. However, new evidence has emerged that suggests the Titanic may have sunk due to a fire that weakened its hull. It’s believed this same area is where the iceberg ripped open hull that terrifying night in April 1929.

A January 2017 Smithsonian Magazine article describes how a coal fire may have weakened the hull of the unsinkable ship, the Titanic. It was a fire that had burned for some time prior to the ship leaving the Belfast port. The weakened hull was ripe for the damage the iceberg caused when the ship struck it (2).

The Smithsonian Channel aired its documentary, “Titanic: The New Evidence” on January 21, 2017. Hosted by Sean Molony, an Irish journalist, the documentary describes how the fire burned for weeks before the Titanic set sail.

Perhaps one of the most despicable cover-ups ensued to hide the truth from the public. It’s possible that the bunker fire was the real reason for the disaster that claimed 1,500 lives. The theory of a fire is based on numerous accounts of a fire burning in the three-storied coal storage room.

This fire is said to have started nearly three weeks prior to the Titanic’s maiden voyage. More disturbing are the reports that the fire was still burning when the ship left the harbor.

Why would such an atrocity be allowed to happen? The catastrophic damage to the company’s reputation, loss of faith in the British ocean liner transportation and the tremendous financial loss for the company and its financers. Instead of addressing the inability to extinguish the fire, the decision was apparently made to cover-up the problem and carry on as though nothing was wrong.

Molony spent over 30 years researching the history and fate of the Titanic. The ship had been advertised as unsinkable. How could an iceberg have created such catastrophic damage?

The turning point in his research was when Molony uncovered a treasure trove of long-forgotten photos tucked away in an attic. The Belfast company of Harland and Wolff built the ship and its director had kept photos documenting the building process of the famous unsinkable ship.

The documentary describes how Molony and his partner bought the photos and began examining them for any telltale signs of what might have led to that fated night. In several photos, they found a mysterious 30-foot blackened streak that ran along the outside hull. Coincidentally, it was near the “starboard side” that was later ripped open by the iceberg.

Intrigued, they consulted with naval architects for an explanation, but no one could explain why such a steak would be there. The Smithsonian reports that any possible reflection was ruled out since at the time of the photo there was nothing along the shore to cast a reflection along the ship’s hull.

The engineers at the Imperial College London theorized that the blackened streak might have been the result of the fire burning inside the coal bunkers located next to the hull.
Such intense heat would have radiated against the hull skin and damaged the integrity of the metal.

In an April 2008 interview with Titanic researcher Ray Boston, the UK’s publication Independent discussed the coal fire theory. Having researched the Titanic for 20 years, Boston believed the Titanic was a “floating time bomb”. (3)

The coal fire that reportedly had been burning out of control for weeks prior to the Titanic setting sail from Southampton was reported to still be raging when the ship left the harbor. The fire, Boston told journalists Ian Griggs and Paul Bignell, was the reason the Titanic was traveling so fast through such treacherous waters.

Boston’s theory was backed up by the documentation of the testimony of the White Star line managing director Bruce Ismay. White Star Line owned the Titanic. During the investigation, Ismay admitted John Pierpoint (JP) Morgan forced the crew to “cross the Atlantic at full speed.” He stated that Morgan was aware of the fire but the information was kept secret “so as not to alarm passengers.”

JP Morgan and the Cover-Up

The Independent quoted from Boston’s testimony about the full speed directive, “Morgan thought it was necessary, in order to justify his gamble, that they should reach New York and unload all the passengers before the inevitable explosions occurred.”

Boston also informed the investigators that the day before the ship set sail, JP Morgan “quietly canceled his ticket”.

In addition to Boston’s testimony, a survivor of the Titanic, Fireman J Dilley (stoker), testified about the uncontrollable fire raging in the ship’s bunker number six. He told the investigators that the ship’s stokers had discussed the protocol for emptying the “big coal bunkers” as soon as they unloaded the passengers. They would then rely on the fireboats to assist in extinguishing the bunker fire.

Dilley added, “But we didn’t need such help. It was right under bunker number six that the iceberg tore the biggest hole in the Titanic.”

Not everyone agrees that the coal fire that burned for weeks before and during the Titanic’s crossing of the Atlantic was the reason ill-fated ship sank.

Former honorary secretary of the British Titanic Society, Dave Hill stated, “A fire may have accelerated this. But in my view, the Titanic would have sunk anyway.”