Did You Know Germans Attacked New York in 1916? 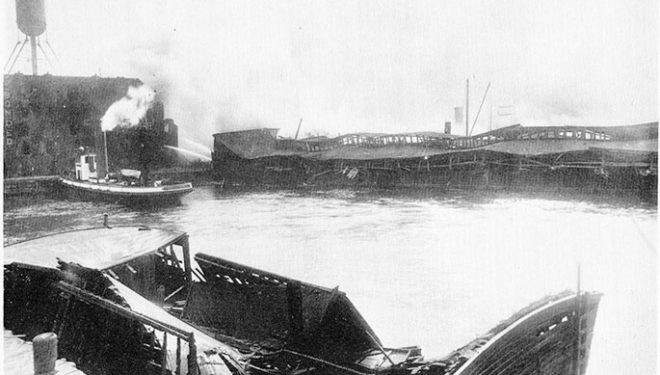 SallyPainter view more articles
Facebook 0 Twitter 0 Pinterest 0 Google 0 LinkedIn 0
On July 30, 1916, New York Harbor was rocked when two million pounds of munitions exploded. The blast was so powerful that Brooklyn Bridge shook and six miles away plate-glass windows burst from their frames. Buildings shook in five surrounding states. Five people were killed from the blast, including a 10-week old baby boy in Jersey City when he was propelled from his crib.

It began with a fire. Upon seeing the first flickering flames, the watchmen fled the scene just before the first explosion at 2:08 am. Within 30 minutes a second explosion generated the same amount of energy as a 5.5 earthquake. This second blast was felt nearly “90 miles in every direction.” People in Philadelphia and Maryland felt the blast.

The explosions occurred on Black Tom Island (currently known as Liberty Island Park). A massive crater (375’ x 175’) was gouged out of the 25 acre island.

History.com reports some of the astounding statistics of the explosions (1).

A year before America finally joined WWI, the munitions and armaments warehoused on Black Tom Island were shipped to European Allies. It was one of the largest shipping ports for weapons. History.com describes how vast this munition hub was, stating there was a five mile radius from Lower Manhattan City Hall where 75% of all the US munitions and armaments shipped.

According to the Smithsonian, many of the piers were called powder piers because they were loaded with explosives. In fact the night of the explosions, “Johnson Barge No. 17 was packed with 50 tons of TNT, and 69 railroad freight cars were storing more than a thousand tons of ammunition.” All these munitions were soon to be shipped to Britain and France (2).

After the explosion, firefighters arrived on the scene, but they were unable to combat the fire. Instead, they had to seek cover from stray bullets and shrapnel buzzing past as the ammunitions continued to be ignited by the raging fire (3).

Immediately after the explosion, officials declared the Black Tom Island explosions were not an attack by German terrorists. This conclusion was challenged for several decades. History.com reports the official line was negligence by several owners. There was enough blame to around, including warehouse owners, railroad car and barge owners and even the watchmen using smudge pots to combat the mosquitoes. The Smithsonian describes the chaos that followed the explosions. Three railroad officials were arrested and charged with manslaughter. This was done on the belief that the fires started in two of the freight cars. This was later proved incorrect.

Years later, the belief that the explosions resulted from negligence was replaced with a more feasible scenario of German terrorism. That’s because master spy Franz Von Rintelen, known as the “pencil bomb” designer was suspected of attacked over 30 ships that resulted in the destruction of “millions of dollars’ worth of cargo”. Rintelen’s pencil bombs came in the size of cigars. He filled the copper chamber with an acid that would eat through the metal creating flames. This technique allowed him to set cigar bombs on ships, only to detonate days later once the ships was at sea.

The Smithsonian details how investigators discovered a Slovak immigrant Michael Kristoff, 23. Authorities believes Slovak bribed his way into Black Tom munitions depot. They believed, but were unable to prove that Kistoff, along with two Germans, Lothar Witzke and Kurt Jahnke, set “incendiary devices” that resulted in the two explosions. At one point, Kristoff was arrested, but insufficient evidence forced his release A German seaman Witzke was later sentenced to hang for spying while also implicated in the sabotage conspiracy. He was never charged and his death sentence was commuted.

It took a few years, but lawyers did manage to prove the existence of this German conspiracy to blow up the munitions depot. The lawyers uncovered a rowhouse in Manhattan owned by a “German-American opera singer”. She allowed the German agents to use her home for planning the Black Tom Island attack.

After WWI, the Mixed Claims Commission was created to mitigate all damage claims by governments and individual companies from German sabotage. The plaintiffs for the Tom Black explosions were awarded $50 million. It too years for Germany to pay this fine.

In fact, a 1939 international claims commission declared Germany must pay for the damages. Yet, it took until after WWII that the last installment was made. At the time, it was the “largest settlement by an international tribunal.”