Operation Highjump: When the US Militarized Antarctica 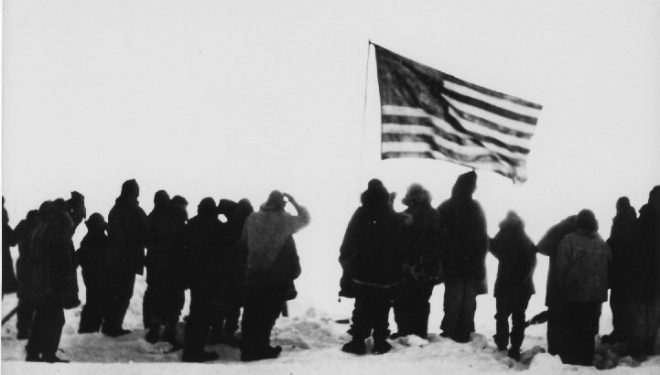 The Goals of Operation Highjump

The goals of the expedition included(2):

The expedition was organized by Admiral Richard Byrd, who had led several Antarctic expeditions between 1928 and 1940 and was the first person to reach the South Pole by air.

Operation Highjump was led by Rear Admiral Richard Cruzen, who had participated in the last pre-war Antarctic expedition. Besides naval personnel, the operation included numerous scientists, including meteorologists, zoologists, physicists, and oceanographers.

The Little America Base

Operation Highjump established the Little America base and started aerial surveys of the southernmost continent. The expedition discovered, for the first time, that Antarctica had areas that were ice free and even had pockets of water. From a scientific perspective, the expedition was a complete success.

Naturally, such an expedition(3) the size and scope of Operation Highjump had a military purpose. The Cold War was just starting, and American military planners perceived that the United States might be vulnerable to attack from long-range bombers flying over both the north and south poles. The perceived threat would require an American military presence in Antarctica.

In the late 1940s Antarctica was subject to rival territorial claims(4) by a number of countries, not only major powers such as Great Britain, but also smaller countries such as Chile, Argentina, and Norway.

Even though the continent constituted the most extreme land environment on the planet, Antarctica was presumed to have mineral resources that might be exploited given time and effort. So, even though it has been officially denied, it is entirely plausible that Operation Highjump was conducted, in part, to establish some kind of American territorial claim.

The problem faced by American military planners was that a conflict over Antarctica would prove to be a distraction from the larger necessity of forging a coalition to oppose the Soviet Union. Eventually, under the Eisenhower administration, the United States decided not to pursue any territorial claims but rather to assert undefined “rights” for unfettered operations in Antarctica.

Eisenhower also decided that future expeditions to the southernmost continent would be scientific in nature, though with a military operational element. This approach was the basis of the extensive expeditions undertaken by the United States and a number of other countries to Antarctica during the International Geophysical Year of 1956-57.

The 1959 Antarctica Treaty(5) suspended but did not eliminate claims of national sovereignty. However, it did reserve the continent as a scientific preserve, prohibiting military operations and greatly restricting commercial operations. The treaty, which has been in force ever since, has successfully governed cooperation for scientific exploration and is considered a diplomatic triumph, being in effect the first arms control treaty of the Cold War era.