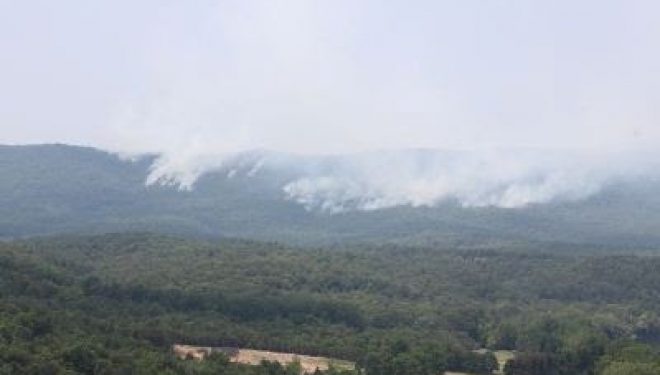 Ordinarily, when one thinks of top secret government documents concerning UFO sightings, alien abductions, and other similar phenomenon, one does not automatically think about the United States Forest Service as a source of such material.


But the Mysterious Universe blog(1) reports that John Greenewald at The Black Vault (2)used a Freedom of Information Act request to turn up a number of reports of UFO sightings and even one case of what one caller to a government Forest Service office thought was an alien base located in Tonto National Forest near Phoenix, Arizona. Oddly enough no Bigfoot sightings(3) were included.

Another report showed a UFO in the skies over the Big Horn National Forest. The Forest Service official in the attached memo opined that the object was probably a drone of some kind.

Yet another consisted of an attached article about Yaak Air Base located on Montana that operated between 1951 and 1960 as an early warning radar facility to detect and track Soviet bombers in case of a nuclear war. In 1952 some of the Air Force personnel detected what appeared to be a “dark, cigar-shaped object” visually that was also tracked on radar. The mystery of the UFO sighting has persisted to the present day.

Finally, a more recent report relays an account of a fire on Massanutten Range, Virginia in the George Washington National Forest. The incident, which took place June 24, 2012, was alleged to have been caused by falling debris, perhaps space junk or a meteor.

The documents in question do not have a lot of detail, nor is there any indication of a follow-up investigation either by a government entity or a private group. The Big Horn National Forest sighting perhaps (likely?) was a drone or some other aircraft not of alien origin. The Yaak Air Base sighting was indistinguishable from a thousand other instances. If anyone investigated the matter further, nothing about such is indicated in the documents.

The flaming debris in Virginia is also likely a natural event. The Earth is bombarded by objects all the time, some of which reach the ground without burning up in the atmosphere. The most spectacular recent example was the Chelyabinsk meteor event(4) that took place on February 15, 2013, when a 20-meter near-Earth asteroid entered the atmosphere over Russia, streaked across the sky, and then exploded over the Chelyabinsk Oblast in the southern Urals with the force of a nuclear weapon, causing widespread property damage and numerous injuries, but thankfully no death.

The “alien base” account is interesting at least from the point of view of its entertainment value:

“All –
“David received a call this morning at the front desk from a male caller reporting the construction of a secret government installation upstream from the Salt River Canyon past Pinal Creek (upstream from Roosevelt Lake). Aliens and at least one detached head are involved.
“Caller claims to have seen construction cranes coming out the side of the cliffs, miniature stealth planes and UFOs, aliens and people working together at the site, aliens eating people. He found a severed head and claims to have pictures of some of this stuff.
“Caller reported that he is 60, not crazy, and doesn’t do drugs. He said he had already called the “office at the lake,” but he didn’t know if those people were turning the other cheek or maybe those people have been paid off.
“David had him leave a message with Bray.
“Please let me know if there are any Talking Points to be developed. I’m sure the Phoenix media will be all over this.
“Thanks.
“P.S. David and I aren’t doing drugs either.”

One detects a certain amount of sarcasm in this memo from a bored bureaucrat who has found a small amount of entertainment, Special Agent Mulder, please call your office.